Review: Doug Wilder’s Political Memoir Is Only as Deep As a History Lesson 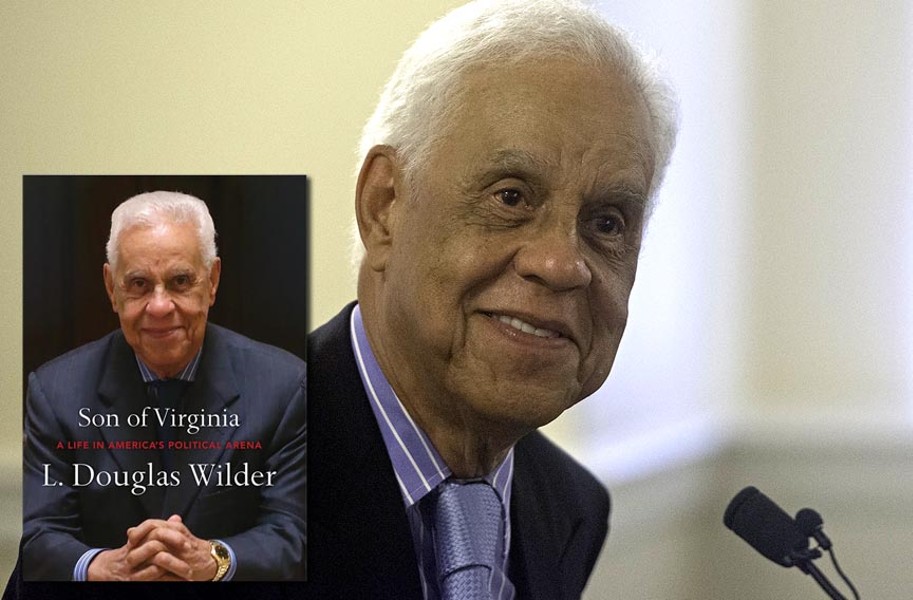 Only six pages of former Gov. Doug Wilder’s new book are devoted to his 2005-’09 term as Richmond mayor.

I was 5 when L. Douglas Wilder became governor of Virginia in 1990.

In Chesterfield County history classes of the ’90s, civil rights consisted of a chapter on events that happened in Washington and the Alabama cities of Selma and Montgomery. Massive resistance to school integration was a thing that used to happen. I recall Wilder’s victory as the country’s first black elected governor being cited at the end, proudly, as though all injustice had been overcome.

Only as an adult did I learn about sit-ins at the Thalhimers lunch counter downtown, or about Martin Luther King’s 1960 speech at the segregated Mosque. Only later did I understand how much of Chesterfield was built to accommodate white flight.

In that way, Wilder’s political memoir, “Son of Virginia: a Life in America’s Political Arena,” is an important text of Richmond and Virginia history. His first-person account of segregation, civil rights and electoral successes brings local history to life in a way textbooks couldn’t.

As a student at Virginia Union University, working at the William Byrd Hotel, Wilder witnessed two speeches by presidential candidate Robert Taft. One catered to the segregationist white crowd at the hotel, and one, about equality, to black VUU students. The state employment agency tried to steer him toward a job as a school cook, after he graduated with a degree in chemistry.

Elected to the Virginia Senate in 1970, Wilder held his seat for 16 years before being elected lieutenant governor. His is a singular perspective on the development of the modern Democratic Party of Virginia in that era, with the passing of Harry Byrd’s segregationist political machine and the re-alignment of party values.

Wilder played a role in this by threatening to run against — and take away black and minority votes from — Byrd Democrat Owen Pickett in the 1982 U.S. Senate election.

“If he does not run, I don’t run,” Wilder told then-Gov. Charles Robb. Wilder alienated many members of his own party, particularly when the more progressive candidate they nominated lost to the Republican.

While articles in the ensuing years were eager to cite this incident as fuel for the tabloid-ready feud between Wilder and Robb, Wilder’s account reminds us there were historical factors in play, a waning internal battle for the party’s future.

The book falters in failing to make a case for much beyond Wilder’s own success and chutzpah. I struggled to find specific principles for which he stood, beyond simple platitudes of equality, civic engagement and fiscal responsibility.

During his campaign for governor, he met with striking miners in Southwest Virginia, “a nightmare” for the administration he was part of. Gov. Gerald Baliles had sent state troopers and many miners were arrested.

Wilder describes balancing the miners’ concerns with toeing the party line. And then: “The strike dragged on, but my outreach efforts paid off. On election day, I carried all five of the coal counties.”

That’s how the strike ended: He got their votes.

The book is rife with such moments, in which Wilder seems not to realize when his telling of an event comes off as tactless.

Also surprising is how easily his account speaks to his obstinacy and pettiness. Wilder seems to revel in his many political disputes, particularly those within his party. The book sometimes reads like a checklist of belated rejoinders to political opponents, frienemies and op/eds.

The closest we get to a political regret is his disappointment in not bringing the Washington Redskins to Virginia while governor.

Readers who hope to better understand his 2005-’09 term as Richmond mayor will be disappointed. In the six pages that cover it, Wilder doesn’t fully explain why an elected mayor was the fix for a “crumbling” Richmond of the early aughts. Nor does he adequately explain why the School Board’s tenancy at City Hall was an anathema to him, prompting him to defy City Council and the courts with a nighttime eviction. He contends simply that he was in the right, “elected as a change agent with the new power of the office.”

It may always be difficult to parse out what, of people’s frustration with his term, was the man himself or the new strong-mayor system. But a combative, uncompromising Wilder certainly made his mark on the delicate balance of city authority.

But however you stand on Wilder’s politics or efficacy as a politician, his career is no doubt compelling. He overcame outright racism, formidable opponents and hesitation within his own party to win historic elections.

The book reminds readers of the personal strength and political acumen that his success required. And, his memories of a not-too-distant city and state are crucial to the canon of Virginia history. S