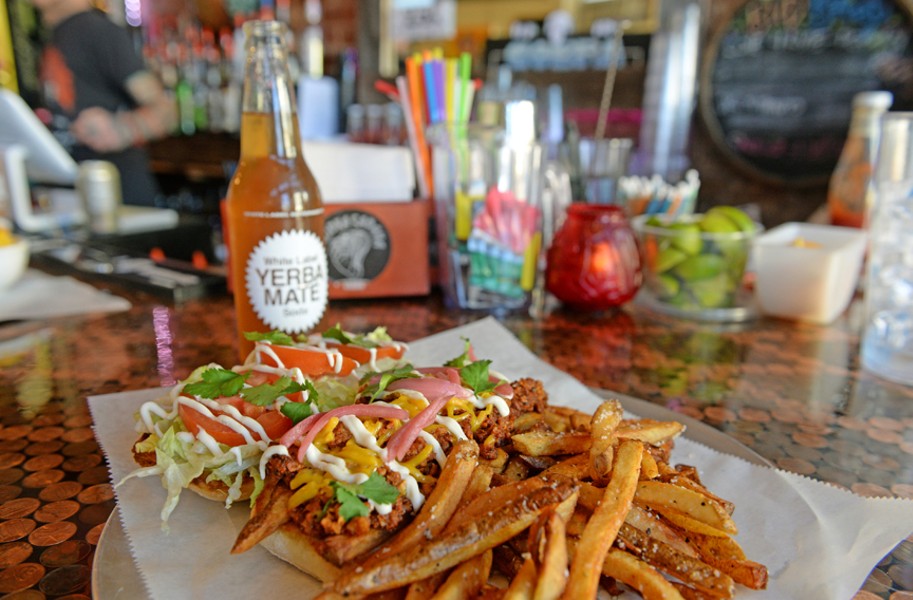 People still mourning the 2017 closure of Black Sheep might want to give its serpentine successor on Marshall Street a hearty look-see.
Cobra Cabana's décor defies easy description, but gritty kitsch is a decent approximation. Its walls feature a combination of pieces the co-owners either already had or received as gifts from local artists or friends of the bar.

"We are very lucky," says Herbie Abernethy, one of three partners behind Cobra. "The place just keeps getting better and better."

Above our table hung a piece featuring Jesus on black velvety material, arms spread, gesturing to a transfer truck. Coulrophobes (those who fear clowns) may want to avoid one of the restrooms, where a clown portrait could easily startle you. A large, sculpted cobra presides over the bar. The personality of the owners — Abernethy, Rob Skotis and Josh Novicki — is reflected clearly throughout the place. It's obvious that the owners, two of whom are metal musicians, aimed to create a neighborhood bar that's edgy, but not too dodgy. The staff is friendly and knowledgeable about everything on the menu.

What's impressive is how thoughtfully Cobra Cabana has approached vegan options. The menu offers roughly a 50-50 split of vegan and meat dishes, according to Lauren Vincelli, the chef who developed most of Cobra's options. Vincelli is no stranger to Richmond's vegan scene. Her personal passion is the cruelty-free re-creation of classic comfort foods, and she has created a service menu that gives vegan diners a multitude of flavorful options.

For starters, the Cubic Zicornian ($5) is a perfectly shareable and visually interesting appetizer of beer-battered tempura corn. It's simple and fried, and it quickly disappears from the basket after landing on the table.

Many menu items can be made to order for meat-eaters or vegan diets. The No Pambozos ($14) is Cobra's take on the Mexican pambazo, a sandwich with sausage and potatoes, with house made pork or vegan chorizo, fried potatoes, rojo sauce, lettuce, tomato, cilantro, house pickled onion, dairy-free lime crema and cotija cheese or vegan cheddar. It comes on a grilled demi-baguette, and a friend who follows a vegan diet said the No Pambozos felt like a guilty pleasure — delicious and rich without being overwhelming.

The Prince of Tides ($12), a vegan lobster roll, features hearts of palm tossed with vegan mayo, celery, peppers and onion on a split-top roll. The heart palms give it a nice texture, and it's not an overpowering or heavy sandwich.

On the carnivorous side, the Lil Frenchie ($15) features tender steak, house chorizo, Swiss cheese and a tomato-beer reduction on Texas toast. The cheese melted atop a generous portion of meat makes it a little sloppy, so consider digging into this one with a fork. The house-cut fries are thicker than shoestring but thinner than steak fries, with a satisfying crisp and the whole thing makes for a filling but not gut-busting meal. For a lighter snack, the Snek Leg Biscuit ($5) is a classic, savory, comforting breakfast sandwich with bacon, egg and cheese on challah or Texas toast.

Cobra Cabana is the rare new restaurant in Richmond with remarkably affordable pricess. In that respect, it represents the best of Richmond's restaurant scene before the glare of national acclaim and notoriety led restaurateurs to rapidly test what the market might bear. You can easily drop in, enjoy elevated bar fare and a beer or two and come out for less than $30.

It's gritty and affordable, yet lovingly crafted. What's more quintessentially Richmond than that?