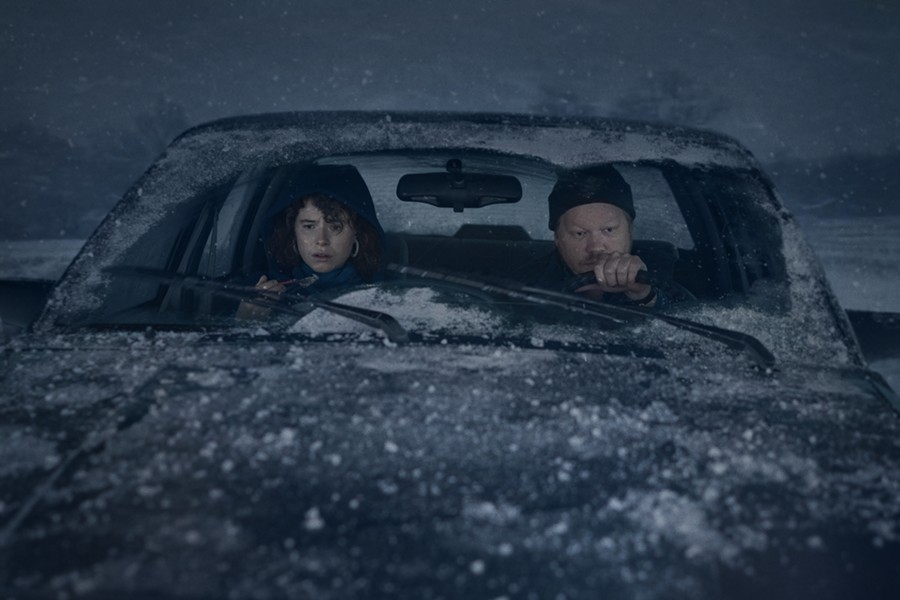 Jessie Buckley and Jesse Plemons are on the road to nowhere in Charlie Kaufman's haunting new film, "I'm Thinking of Ending Things."

If you’re a fan of writer/director Charlie Kaufman, chances are you like your movies with a full serving of dream logic and maybe a side of metaphysical fruit salad.

Kaufman, known for writing acclaimed films “Being John Malkovich” and “Eternal Sunshine of the Spotless Mind,” is back this week with his strangest work to date: an engrossing, at times bewildering adaptation of a 2016 debut novel by Canadian author Iain Reid once described as a “psychological thriller or horror fiction.”

Kaufman diverges from the book and manages to create a mesmerizing and surreal road movie that motors along on melancholy and existential dread, with a terrific cast riding the wordy script. This challenging movie, which reminded me at times of the essay “The Ecstasy of Influence” by Jonathan Lethem, will probably alienate viewers with its opaque ending. But I still think it's one of the most interesting films I've seen this year, mainly because it refuses to spoon feed the audience. Some critics are labeling it bleak or hopeless, which makes sense for 2020, but I think in all of his films, Kaufman finds a kind of love or grace in artistic creation itself, even if humans let him down.

The basic set-up is simple: A new young couple is driving in a snowstorm to meet the parents of Jake (the very Philip Seymour Hoffman-esque Jesse Plemons) who live in a rural Oklahoma farmhouse. This is a smart, academically-minded couple -- are they scientists or artists, or both? On the long ride, the unnamed girlfriend, credited as “the young woman” (played by the wonderful Irish actress Jessie Buckley) indicates in her interior monologue that she sees the relationship going nowhere: “I’m thinking of ending things.”

Those who know Kaufman's prior cinematic obsessions may be thinking: Ah, another film about loneliness and how one can never really know another person. When thinking about the human condition, the young woman reiterates that humans are the only animals aware of their own impending death: “Other animals can live in the present. Humans cannot, so they invented hope.”

It's a claustrophobic film at times, set in an increasingly treacherous blizzard, where you have to pay attention to the script and who is saying (or repeating) what lines. There is plenty namedropping of various works of art from William Wordsworth and David Foster Wallace to filmmaker John Cassavettes to the lesser known “Ice” by Anna Kavan and the Marxist critical theory of “The Society of the Spectacle” by Guy Debord. A key quote arrives from Oscar Wilde: “Most people are other people. Their thoughts are someone else’s opinions, their lives a mimicry, their passions a quotation.”

Kaufman clearly has things to say about how people project their own insecurities and fears onto other people ... and our rampant narcissism and over-saturated, status-driven culture. The dreamlike plot may be maddening for some, but there are plenty other joys to be had: Like the interplay between these amazing actors, the unobtrusive, creepy score, as well as the visual work of director of photography Lukasz Zal (Oscar-nominated for "Cold War").

The clues and Easter eggs quickly accumulate as the viewer attempts to piece together the answers to nagging questions such as: What is real? Why do characters’ ages keep changing? Are these people dead? Are they the same person? Would I understand this better if I had read the book? And what’s the significance of the dead pig eaten alive by maggots?

The dinner scene at the parents’ farm has an unnerving, David Lynchian quality led by a manic, layered performance by Toni Collette as Jake’s mom. A late night scene at a remote ice cream stand, like a Dairy Queen, feels right out of a surrealist master’s playbook. There’s a funny movie-within-the-movie, clearly a dig at Hollywood formula, and dramatic dance sequences arrive out of nowhere. All of it comes at you without much rhyme or reason, forcing the viewer to actively participate to come up with their own meanings.

“Many people come to me after screenings with completely different takes on what they saw,” Kaufman said in a recent interview.“I encourage that. For me, the movie is an interaction between the person experiencing it and the people who made it. Whatever you take from it, whatever resonates with you, whatever it makes you feel, that’s what the movie is. There’s no way to be wrong. You should have freedom within an experience of any kind of creative work to find yourself in it.”

There was a time when I would've considered this a cop-out, since it gives the director a wide berth in avoiding failure. But considering most American movies today are formulaic, designed on demographics and sales estimates, we need movies like this that take chances and respect the intelligence of the audience.

I won't give any more details away -- I'm still processing the film myself -- except to note this is one of those quirky dramedies people will likely either love or hate. I'm sure it will inspire plenty of interpretations and reward repeated viewings, which seems perfect for a time when most of us are stuck inside at night, probably watching too many damn movies.

“I’m Thinking of Ending Things” is available on Netflix on Friday, Sept. 4.