Review: Cadence Theatre's "A Lie of the Mind"

You think your family’s messed up? This offering puts things in perspective. 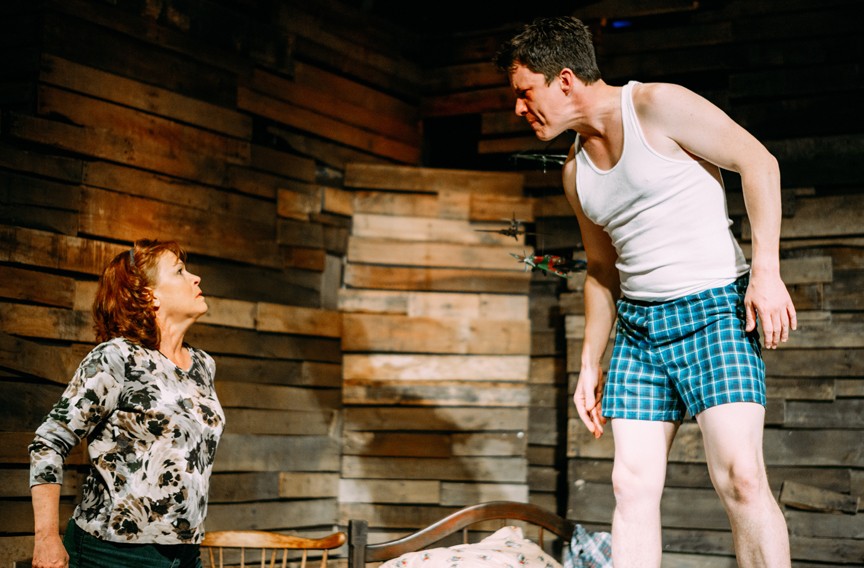 Cadence Theatre’s intense rendering of Sam Shepard’s “A Lie of the Mind” is an unsettling and uncomfortable experience. It’s unsettling in many of the good ways that make theater electric, which may explain why the 2010 Broadway revival of the play was such a critical darling. But the show is also uncomfortable in ways Shepard may not have anticipated when he premiered it back in 1985.

The play explores troubling territory from the first scene with Jake (Landon Nagel) afraid he’s beaten his wife Beth (McLean Jesse) to death and calling his brother Frankie (Alexander Sapp) in a panic. Though it starts with a spouse being battered, the plot doesn’t follow any expected issue-play path, quickly creeping into areas of profound family dysfunction while characters struggle with peculiar circumstances and troubling relationships.

Beth isn’t dead but has suffered debilitating brain damage because of Jake’s beating. Beth’s brother Mike (Justin Sease) takes the rambling, limping patient back to their parent’s ranch in Montana to recover, only to suffer another version of abuse doled out by their father, Baylor (Michael Goodwin), without much support from their spacey mom, Meg (Lauren Leinhaas Cook).

Meanwhile, a guilt-plagued Jake has a breakdown and ends up in California under the care of his mom, Lorraine (Tamara Johnson), much to the dismay of his sister Sally (Maura Burroughs). Strange revelations soon start dropping regarding the death of Sally and Jake’s dad, and recriminations and paranoia run rampant. All of the action plays out accompanied by a trio of musicians led by Drew Perkins who perform bluegrassy original tunes by Perkins while perched atop a majestically rustic set by Rich Mason.

Director Anna Johnson has tapped an excellent assortment of actors who throw themselves wholeheartedly into the melee of passionate confrontations. Jesse continues her ascent to the top tiers of Richmond’s talent pool with her bracing, often heartbreaking portrayal of Beth. Hampered by her character’s injured brain, she still manages to convey a vast emotional range, from abject terror to coquettish attraction.

Nagel rages convincingly as Jake, Johnson coddles argumentatively as Lorraine, and Goodwin domineers grumpily as Baylor. Each ensemble member is up to the extremes of Shepard’s characterizations, making the most surprising performance one of the quietest, with Cook delivering a bittersweet portrayal of addled devotion as Beth’s mom. The maelstrom of family dysfunction is fascinating, disquieting and often funny. As the play’s running time stretches toward three hours, the action veers into the surreal: A man is shot and no one is even vaguely interested in getting him medical attention. Meg and Baylor focus on folding an American flag while a few feet away an obvious threat stalks Beth.

Embedded within these delightfully oddball challenges thrown at us are uncomfortable subtextual messages, particularly related to women. The battered Beth still pines for her abuser, Lorraine blames Sally for all the torment in her life that’s actually been caused by men and Meg loses her air of disaffection thanks to a single kiss from her man. These characterizations don’t seem particular to Shepard’s Western milieu as much as outdated depictions of traditional relationship dynamics.

Johnson handles this challenge as well as can be expected, particularly in her casting of four formidable actresses. But she can’t keep the traditionalist subtext from sometimes clashing with the sensibilities of today. In an odd parallel, the production’s live musical trio often plays along with recorded music. As with the production as a whole, the blend is often glorious but sometimes jarringly discordant.

“A Lie of the Mind” will play through May 23 on Virginia Repertory Thaetre’s Theatre Gym stage. Tickets and information are available at va-rep.org or by calling 282-2620.