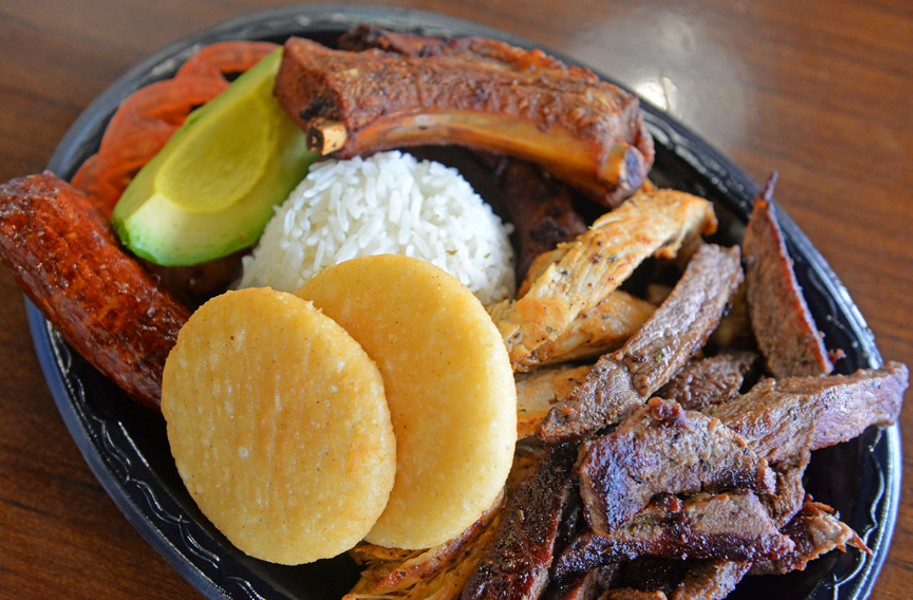 Scott Elmquist The parilla at Bocata Latin Grill is a mixed platter of ribs, chorizo and rice with avocado and arepitas.

It seems every other week a new list comes out, hailing Richmond as one of the best cities to eat and drink your way through. Outstanding, upscale joints with dang-near star-chef status and stellar bar programs have become the norm, and the accolades are well-deserved.

That said, locals know that some of the best food in town comes from unsung places — mom-and-pop holes in the wall that sling goodness as if it came from grandma's kitchen. Such is the case with Bocata Latin Grill, purveyors of seriously fine Venezuelan eats.

Open just two years, this place has gained a substantial following. Style Weekly readers recently voted it best gluten-free and best local burger in its annual Best Of Richmond issue. Just take a look at Bocata's Facebook page, where the devout stalk menu additions and drool over daily specials. Phrases like "legit" and "the best" are common in the comments.

Settled in a strip mall off Walmsley Boulevard in North Chesterfield, Bocata is a no-frills eatery — it's walk-up ordering, white walls and plastic utensils, folks. Most everything is served in red plastic baskets with the exception of heaping entrees. If soccer is your thing, you're in luck as there's usually a game on the back wall TV. What it lacks in ambiance, however, the grill makes up for with intense flavor and hospitality. On both of my visits to Bocata, the place was packed. Expect a warm welcome when you enter and a few recommendations if you find the menu a little overwhelming. Pro tip: You might want to take a gander at the offerings online before visiting, to give yourself some time to properly agonize over the expansive menu.

Venezuelan fare is anchored by staples like corn, rice, plantains, cheese and various meats and veggies, so there's a little something for everyone, including those of the gluten-free and vegetarian persuasions. Start your meal off right with an order of tequeños ($5.50), Venezuelan fried cheese sticks. These aren't your run-of-the-mill breadcrumb-covered mozzarella pieces a la TGI Friday's, but rather thick slices of queso fresco wrapped in blistering bread dough, served with creamy garlic and cilantro dipping sauce. Worth noting, the latter ingredient is barely detectable, for those of you who find the ever-polarizing herb to resemble soap. Don't fill up on these bad boys though. You'll want to save room.

While you might think of things like empanadas and arepas as starters, at Bocata these things have the potential to be your entire meal. A solid option proved to be a mixture of empanadas including plain cheese, chicken and pabellón, which combines beef, cheese, plantain and beans, with a side of yuca. Each corn turnover is plump, golden and far exceeds the size of most you've seen, especially for $3. The first break revealed a bounty of filling and gushing cheese — oh, the glory.

The cachapas ($9-$11), or corn pancakes, were equally pleasing. Like a foldable cornbread cousin, this semisweet handheld transports everything from steak to — you guessed it — cheese, to your face. Having maxed out on chicken and plantains, we gave the ham and cheese a go, which offered a balanced blend of sweet and salty. Again, order up a few of these and call them dinner.

Several dishes satisfy heartier appetites and those who might shy away from deep-fried foods. Parilla ($19.50), a mixed grill platter, is perfect for the most indecisive diner — or for sharing, if you're into that — with a smattering of juicy ribs, chorizo and rice alongside tomato, avocado and arepitas, a flat bread made of maize dough. We heard a diner at the next table over raving about his pabellón with its shredded beef, rice, black beans, sweet plantains, fried egg and avocado, and if the flavor lived up to presentation, it's safe to say that man was in for a treat.

Most things packed a mega flavor punch, but never too much kick, making Bocata great for kids too. And if you've got super picky little ones they can nosh on chicken nuggets ($5).

You can't go wrong with the sandwiches, like the aforementioned hamburguesa ($12), served with cheese, avocado, onions, tomato, egg, sausage, ham, coleslaw and crispy potato sticks. And as if there weren't enough edible reasons to give Bocata a try, there's also a beer menu. Available suds range from Dos Equis to some craft brews, but you might not see them hiding behind the counter. Don't hesitate to ask about them.

If there's room, close things out with some sweet stuff. The chicha, a sweet, milkshake-y concoction that tastes like arroz con leche, is a classic dessert beverage in Central and South America. And just like everything else from Bocata, it may not be fancy, but you won't forget it. S