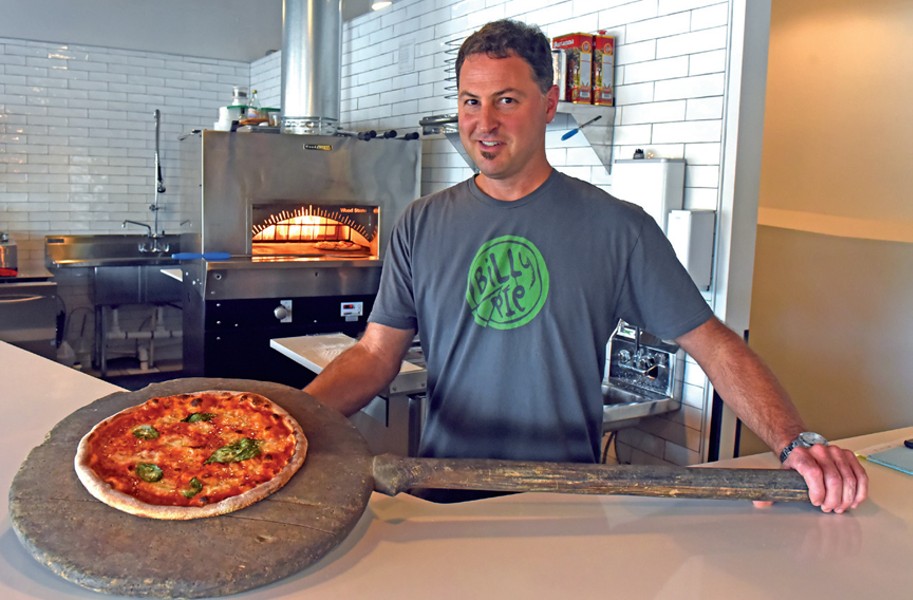 Scott Elmquist At Billy Pie on Patterson Avenue, the pizzas are both traditional and creative.

Richmond's pizza wars are running at full tilt, and can anyone complain?

In addition to the myriad pizza-focused spots opening every other minute, it's also popping up on menus at established restaurants. Billy Pie is a long-awaited addition to the roster. And although we don't get the handmade dough or wood-fired oven one might expect from Billy Fallen, this version delivers on flavor.

Traditionalists insist on pizza made by Neopolitan rules: hard wheat flour, hand-formed dough with a raised edge, extra-virgin olive oil and ingredients from the Campania region, cooked to perfection in a wood-fired oven. Some fans find those rules to be too strict and perhaps created simply to sell Italian ingredients, but the closer a pizza adheres to this simplicity, the better it tastes. Billy Pie feels traditional, with chef-inspired ingredient combinations.

It's a surprise that owner Billy Fallen doesn't make his own dough, given that he started, ran, then sold a popular wholesale bread-baking business, Billy Bread. For Billy Pie, Fallen contracts with a New York area baker to make his own dough recipe in bulk. Fallen says he can't make the required volume himself, but outsourcing does erase some of the Billy mystique.

Each time we visited, the crust thickness was perfect — thin enough to be chewy instead of doughy, but thick enough that a slice only slightly droops under the weight of the toppings. Cooks hand-stretched the dough, pressing a nice edge all the way around the 12-inch pies.

The crust was terrifically fresh, but a little bland in next day's leftovers. Where Billy Pie stands out from its competitors is in the creative topping combinations, and the ratio of ingredients to crust.

Billy Pie's toppings were appropriately spaced out, with random blobs of fresh mozzarella, clumps of mushrooms and piles of fresh arugula. Many pizza makers rely too heavily on cheese to cover other sins, a tactic that I associate with pizza-making inexperience. It takes guts to scale back on pizza cheese, and at Billy Pie the cheese was a rich flavor ingredient that balanced other toppings.

This isn't cookie-cutter perfection, it's handmade pizza with personality. For example, some parts of our pizza had several mushrooms, while other slices had one or none — we were able to work around this since our server gave us scissors to cut our own pies.

The flavors were well matched. A pesto and smoked scamorza cheese pizza was a standout for the blend of smoky cheese and spicy basil, both strong flavors that played well together. The ricotta mushroom white pizza (no tomato sauce) was smooth and garlicky with scattered whole small mushrooms.

Pepperoni is a good standard by which to measure any pizzeria, and Fallen's pie offered proper "roni cups," pepperoni slices that curled into oily little saucers. On the nights we were there, Billy Pie's pizza makers were also making requests with the ingredients on hand, including a gluten-free option.

Our pizzas were speckled with coveted leoparding, the smoky charred spots of caramelized crust and cheese. They were evenly dappled on both the underside and crust.

At Aziza's, the Fallen family's former restaurant in Shockoe Bottom, now the home of Nota Bene, the pizza oven was wood-fired. I was disappointed to see that Billy Pie's oven is gas powered — like the dough, it must be a concession to commercial consistency. It was still fun to watch the cooks stretch the dough, add toppings and tend the bubbling pizzas that cooked in mere moments. Grab a seat at the long bar to watch the action.

The white interior has a streamlined but friendly feel. It's appropriate for a pizza-focused spot, maybe a bit spartan for a special date night. The play list is eclectically interesting and not too loud for conversation, although the occasional youngster birthday party adds to the noise.

Without a kitchen in the small space, Fallen turns out simple appetizers. We tried the lemony arugula and fennel salad; a seasonal version of panzanella, the Italian bread salad with tomatoes and olive oil; and a burrata salad which featured oven-roasted local peaches on a fall visit. Everything we tried had the confident simplicity of good ingredients not overly processed.

Billy Pie got its start at Triple Crossing, and it is still available at both locations. Bakers there also crank out pizzas that are then frozen, vacuum sealed and sold at local retail outlets such as Ellwood Thompson's Local Market.

Fortunately the famous cream puffs from Aziza's, still made by Fallen's mom, are again available at Billy Pie, and we were delighted to indulge. Our giant puff served two, with tender crust filled with mascarpone cream, then dipped in a chocolate ganache topping. It was the perfect sweet carb finish to a delicious carb-lover meal.