REVIEW: At the newest iteration of Don’t Look Back, it’s still all about the tacos and the tequila 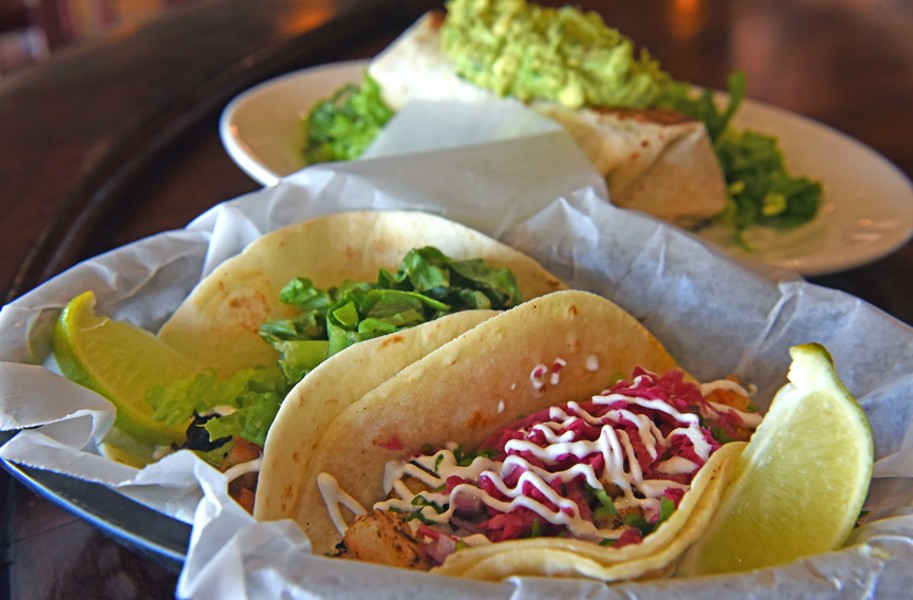 Scott Elmquist A carnitas taco is served gringo-style on a flour tortilla alongside a traditional fish taco on corn. Behind them is a pinto bean burrito with guacamole.

When I first reviewed Carytown's Don't Look Back in 2012, Richmond was a very different restaurant town.

Agave fans rejoiced at its substantial tequila menu, while those on limited budgets could fill up on $3 tacos. Nightly mariachi music was accompanied by fifty cent Pabst Blue Ribbons and the chicken-skin tacos on the specials board never lasted for long.

Fast forward through five wildly successful years in Carytown to last summer's kitchen fire, which shuttered the restaurant and left legions of regulars wondering if their favorite watering hole would ever rise from the ashes.

Oh, ye of little faith. Nearly double the size of its old digs, with walls painted the exact color of the former location, the new space is bigger and better than ever. It's also got a more specific name: Don't Look Back Triple, due to its new home in a former billiards hall many of us recall for the eclectic bill of bands that played there. But even if you never caught a show or shot a game of pool, the new restaurant is easily identifiable because of the sign featuring a colorful rack of billiard balls that's graced Broad Street for decades.

A larger space allows for a lounge with low-slung black leather couches, three refurbished pool tables from the original Triple and a Mickael Broth mural in the back that includes various Southwestern motifs and, notably, a bag of Fritos.

That's right, its quintessential Frito pie ($5) is back, as delicious and filling as it ever was. For the uninitiated, we're talking about a bag of Fritos with the addition of pinto beans, red chili sauce, cheese, salsa, lettuce and sour cream. If six layers of goodness isn't enough, you can add a taco filling ($1) such as carnitas or shredded beef for a killer $6 meal. Yes, it arrives in the Fritos bag and although you could pour everything out, you'd be missing the singular pleasure of eating from the bag, ideally after a vigorous stirring to marry the ingredients.

Another staple that's back, along with Frito pie, is waiting for a table. At 7 p.m. on a summer weekday, there's a 45-minute wait unless we're willing to sit at the window counter facing Broad Street and order from the bartender. Hunger trumps service and the affable bartender has our food delivered to us lickety-split. If it's busy and you're not fussy about table service, this is definitely the way to go.

Among the updates from the kitchen are a kids' menu and the Santa Fe salad ($5) laden with the black beans, roasted red peppers, fried corn tortilla strips, corn and queso fresco with an avocado vinaigrette. My only complaint would be the paucity of corn, tough to understand given that we're at the height of sweet corn season.

A similar head scratcher was the nachos ($5), which were appealing in their simplicity — black beans, cheese, salsa, sour cream, lettuce — and a darn good value, but boasting so few black beans that we had to go looking for them. Given how cheap an ingredient beans are, it didn't make much sense.

"Feed me tacos and tell me I'm beautiful," reads the T-shirt on a woman waiting for a table on the sidewalk outside. If you can find someone to do the latter, the first is a cinch here. Tacos are available on corn and flour tortillas, both of the soft variety, and done traditionally with cilantro, onion and lime or gringo-style under a blanket of cheese, lettuce, sour cream and salsa.

Only the breakfast taco ($3) with egg, salsa and lettuce benefits from the gringo treatment, while carnitas ($3.50), shrimp ($4), cod ($4) and pulled chicken ($3.50) take better to traditional. Both the shrimp and cod get a charged kick from the heat of cabbage slaw. Vegetarians have their pick of portobello ($3), deep-fried Twin Oaks tofu ($3) and, the star of the lot, potato tacos ($3), a satisfying mélange of seasoned hash brown potatoes and green chilies even a carnivore can love.

After three meals at Don't Look Back, I feel reassured that nothing much was lost in translation. The extensive tequila menu ($5-14) still seduces with an array of blancos, reposados and anejos and the Frito pie game is as strong as ever.