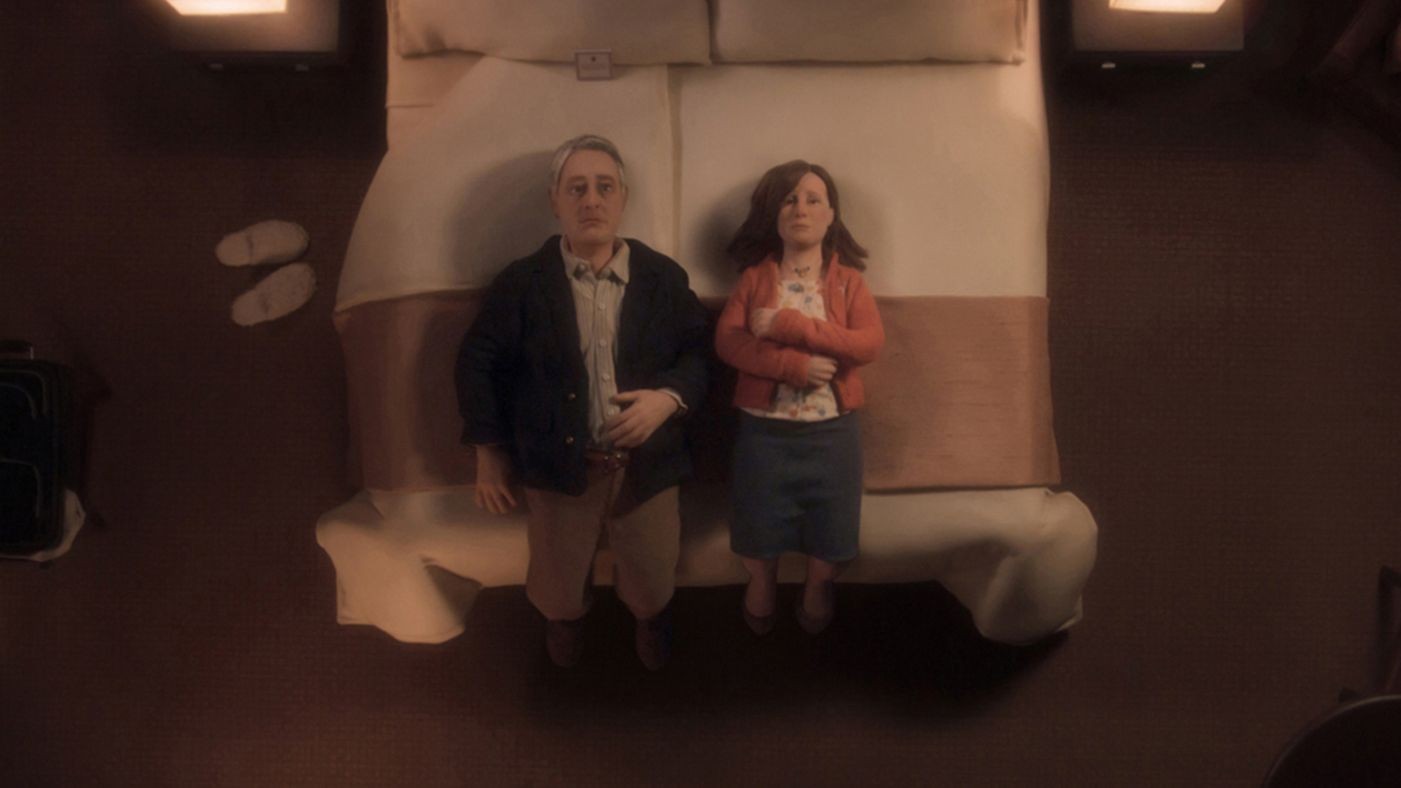 “Anomalisa” trailers sell the film as a life-affirming love story, even giving it the impression of a grandiloquent meditation on such matters. Voice-over discusses humanity in sympathetic terms as two strangers find each other and seem to fall in love. The music swells toward a feeling of emotional triumph. Kind of crazy considering the film’s writer and co-director, Charlie Kaufman, is so well known for acerbic, existentially shrewd fare as “Being John Malkovich” and “Synecdoche New York.”

Whether you are relieved by the news or not, rest assured it’s quite the opposite. Most of that philosophical-sounding voice-over heard in the pithy “Anomalisa” trailers is culled from a depressing scene in which the protagonist, Michael Stone (David Thewlis), is having a mini-breakdown while giving a convention speech. He’s booed. If the film builds anywhere from that uncomfortable moment, it’s to an emotionally ambiguous, even bleak conclusion, not a cathartic one.

Even more strange, all this happens in a movie starring stop-motion puppets (with human voiceover). It opens with a cacophony of their idle chatter in the ether. Then we see a plane, where middle-aged Michael sits waiting to land, in Cincinnati, Ohio. He’s on his way to speak at a convention on customer service, which in hindsight ends up being the film’s big, long, but extremely subtle and dry in-joke. All Michael encounters is customer service, from the cab driver to the hotel clerk to the room service attendant, and those interactions prove less than the ideal Michael pitches to his followers. They are normal interactions, sometimes painfully so.

Michael sells the idea of carefully manufactured pleasantry, but his cab driver is the kind of obtuse person who insists he do the tourist things in town, despite the fact that he’ll only be there one day. The hotel clerk locks onto him with seriously awkward eye contact, and doesn’t break it even while bringing up his reservation on a computer. The hotel’s bar waitress makes a snide comment about how many cocktails he’s had.

Customer service is only tangential to the film’s point, however, which reveals itself so slowly it’s easy to imagine many audience members struggling to comprehend what Kaufman and co-director Duke Johnson are up to with such finely crafted animation put to the service of ordinary life. The movie is more about human interaction in a broader sense, and since all these puppets in the film look and sound almost identical to each other, we get the impression that Kaufman’s view of human interaction is unfavorable at best.

“Anomalisa” suggests that a world in which the ideal interaction is a sanitized, contrived one between a salesperson and a consumer might have forgotten how to be real and sincere, or original and insightful. Or at least it might appear that way as one is walking among its sterile maze of commerce. The film becomes a metaphor unto itself: fine artistry wasted on credit card transactions.

Feeling unsettled and wondering why, Michael brightens up when he hears Lisa (Jennifer Jason Leigh) outside his hotel room. He rushes out to see who she is. Her voice is different, which the film makes excruciatingly clear by casting Tom Noonan to play every other voice in the film except for Michael and Lisa.

Michael dubs her Anomalisa. He’s ecstatic. He plans to leave his family. And then it’s all downhill from there. Self-deprecating to a fault, Lisa admits that though she’s read Michael’s book, she’s never been able to work directly with customers because of a slight scar near her right eye. In one of the film’s frightfully realistic moments, she sings Cyndi Lauper’s “Girls Just Want to Have Fun.” It’s her favorite song. Scrambled eggs are her favorite breakfast. Soon Michael can’t tell if she sounds like Jennifer Jason Leigh or Tom Noonan.

A joke at the beginning of “Anomalisa,” when a fellow passenger apologizes for instinctively seizing Michael’s hand as the plane lands, feels like the movie’s one false note, a too-easy gag. But that feeling changes by the finale. Does it take near death experiences for us to express anything original and personal, anything that has not been carefully edited? The movie’s title is yet another potential land mine of sarcasm, a joke slowly and carefully teased out over the entire running time, a long con. Is Lisa an anomaly, or just another girl from Akron? (R) 90 min. 4 STARS