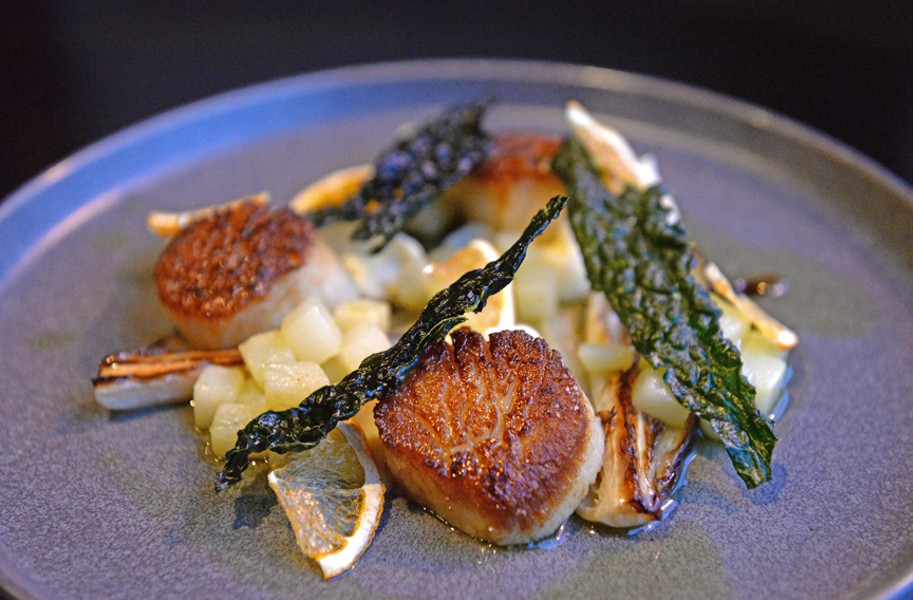 When a new restaurant opens, menus are tested, furniture and art are selected, word of mouth is exchanged and after a few months, it settles into a look and flavor and figures out what it wants to be when it grows up. When Aloi, the new dinner spot on Leigh Street, grows up, it wants to play host to Drake's birthday party.

The interior is closer to what you might expect in a stylish SoHo cocktail bar or the lobby of a boutique hotel in San Francisco than a Scott's Addition warehouse. A reclaimed wood front door is unmarked. Inside the place is dimly lit, with midcentury modern furniture and small, industrial light bulbs hanging above, spotlighting each table. Black and white chalky frescoes, backlit in red, line the walls. Aloi is owned by Brandon Pearson, the same person responsible for the Thai oasis on Broad Street, Sabai, and its Laotian neighbor, Temple. Both spaces, along with the cuisine, immerse patrons in another world. Yet here, the cooking is in the same family as Acacia, Amuse, Southbound and East Coast Provisions. Dishes are seasonal, beautiful and pronounceable. But we all know that doesn't mean they have to be boring.

While you're waiting for a table, sip the Captain Starbuck ($12) with Plantation five-year rum, butternut squash puree, ginger tea and dusting of cinnamon — it's a boozy, pumpkiny eggnog.

For lighter appetites, the chorizo mussels ($15) make for an excellent small meal. Succulent mussels rest in a spicy tomato broth that has an unexpected kick to it. Roasted cherry tomatoes, fennel seeds, garlic slices, parsley and, of course, that chorizo, round out the dish. Though I wish the sourdough had more of a toast to it — and it does charge for extra slices — it serves as a nice delivery system for the rest of that tomato-garlic goodness. Appetizers for the more adventurous include a mushroom pâté and a roasted bone marrow, both $14.

The wild steelhead trout ($26) is the MVP of the entrees. A type of rainbow trout that migrates to the ocean to spawn instead of remaining in fresh water, it's an orange fish that tastes and flakes similarly to salmon. It's cooked to a tender medium and topped with roe, which is enough to excite the palate. But the sides rival the star of the show: A warm shaved Brussels sprouts salad bathed in lemon vinaigrette with a heap of tender, buttery black quinoa is a fresh, comforting and memorable combination.

The day boat scallops ($28) are similarly exceptional. Along with a nicely roasted Brussels sprout, parsnips are at the top of my list of bliss-inducing winter vegetables. They make several appearances on Aloi's menu, but nothing compares to the savory frosting that accompanies the scallops. Picture classic, velvety clouds of mashed potatoes — and then imagine them even creamier and infused with bonito, a savory-tasting cousin of tuna, providing a complex flavor with an afterglow of umami. Dear readers, I would buy this heavenly concoction in bulk and spread it on toast. Meanwhile, three hefty scallops, lightly browned and tender are topped with crispy-fried kale leaves and a braised piece of endive.

Duck confit ($28) was the special during a recent visit: Who do I need to ask to add this item to the regular menu, stat? After being slow-cooked for 16 hours, the duck breast emerges from the holy waters of a sous vide rare and rich, and the skin is seared to a perfect crisp. Place that over a bed of browned parsnip-ricotta gnocchi and warm diced red apple with brandy-vinegar juices, and you have something truly melodious in each bite. This is easily my favorite Richmond dinner of 2018.

The wine-braised short ribs ($27) are the only entree that leaves me wondering. The meat on the short ribs melts in the mouth, but deserves a fuller demiglace. Roasted vegetables are tender but need salt and pepper. The creamy element I've come to expect in a good polenta in the form of cream, cheese or butter is seemingly absent, making the glue that is meant to hold this dish together come out tasting watery.

Dessert is slightly disappointing. The plates are gorgeous, as one comes to expect by the end of a meal at Aloi, but the confections are not satisfyingly sweet. The brownie sandwich ($9), featuring slender, fudgelike wafers with coffee ice cream and brandied cherries, is not quite what this chocolate lover was expecting. The upside down citrus cake ($9), a crumbly almond buttermilk cake with orange curd ingrained in the top, is eye-catching, but otherwise uneventful. Walk over to Brenner Pass or Gelati Celesti instead.

Aloi is a place where the staff knows the process behind each dish, where the taking of plates and replacing of cutlery is an art form and dishes are announced by ingredient as they land on the table. The servers appear and disappear with grace and precision, brushing crumbs off the tabletops between courses, refilling water glasses and then evaporating into thin air. While dinner occasionally takes some time, the meal is worth it.

Aloi deftly balances the allure of fine dining in the upscale nooks and crannies of other cities, with undoubtedly mid-Atlantic-inspired fare. Chef Ben Watters, formerly of Brenner Pass and Lemaire, is clearly bringing it, with a fresh, innovative touch. And once more with feeling: Let's make that duck confit a regular thing.