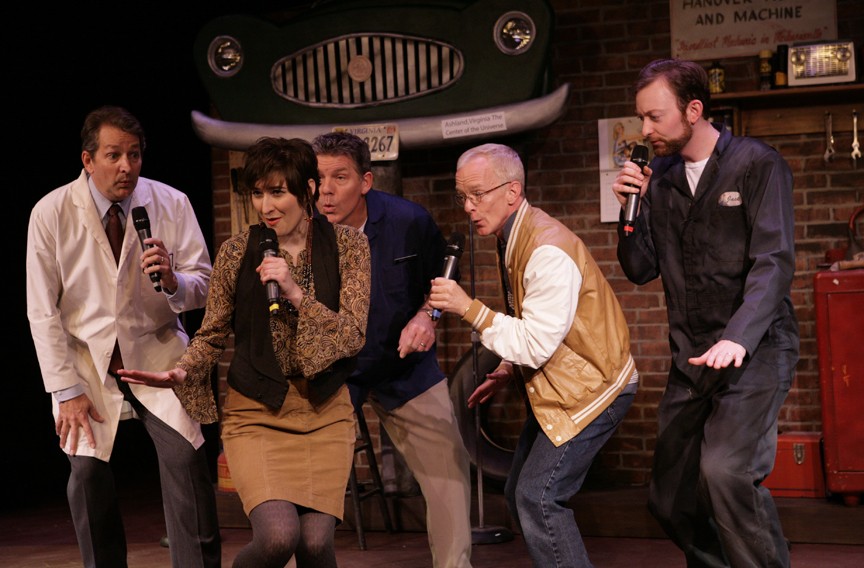 Call me a Grinch, but there’s just something about those sickeningly sweet crowd-pleasers that makes me as cuddly as a cactus. They’re usually vapid productions with little plot, and seem to be a way for theater companies to make a buck while families are visiting for the holidays.

With this admission in mind, I will say this -- if you do happen to enjoy holiday shows, “A Lug Nuts Christmas,” written and directed by Virginia Rep’s Bruce Craig Miller, probably isn’t the production to see this season.

As usual for musicals of this variety, the plot matters very little. Four men from Mechanicsville had a doo wop group back in the day, but broke up after their teenage love interests overlapped. Twenty years later, a meddling matriarch has reunited them for a holiday benefit concert.

The show’s first act is entirely devoid of Christmas songs, performing doo wop renditions of oldies like “Who Put the Bomp (in the Bomp Bomp Bomp),” and “Lightning Strikes.” The first act is innocuous, with the quartet of Jody Ashworth, Ford Flannagan, Steve Travers, and Eric Williams receiving occasional help from Terri Moore and Mandy Williams. The group sings decently enough, but Ashworth’s rich bass-baritone frequently overpowers the other singers.

While the plot wasn’t supposed to be taken seriously in the first place, you’d assume that some issues brought up in the first act would be addressed in the second. If three of the group’s members fell in love with Mary Sue, why doesn’t she make an appearance at the end of the show? Why doesn’t Ford Flannagan’s Moe find love through the course of the show (and for that matter, why don’t the other male roles have any defining characteristics)?

Where the first act attempts to string its musical selections together in some logical fashion, the second act essentially just runs from one Christmas song to the next. On the plus side, it has a fair amount of laughs sprinkled in, and Jason Marks’ musical arrangements are tuneful and fun. Serving as both an auto repair shop and a backdrop for a holiday show, Terry Powers’ set design works fine.

At moments the show touches on a certain hokey charm, but the overall impression you take away is one of banality and a lack of effort. I wish I could write that my heart grew three sizes after I saw the “A Lug Nuts Christmas,” but sometimes you just don’t get the ending you desire.