First you’ll cringe then you’ll laugh at “The Lyons.” 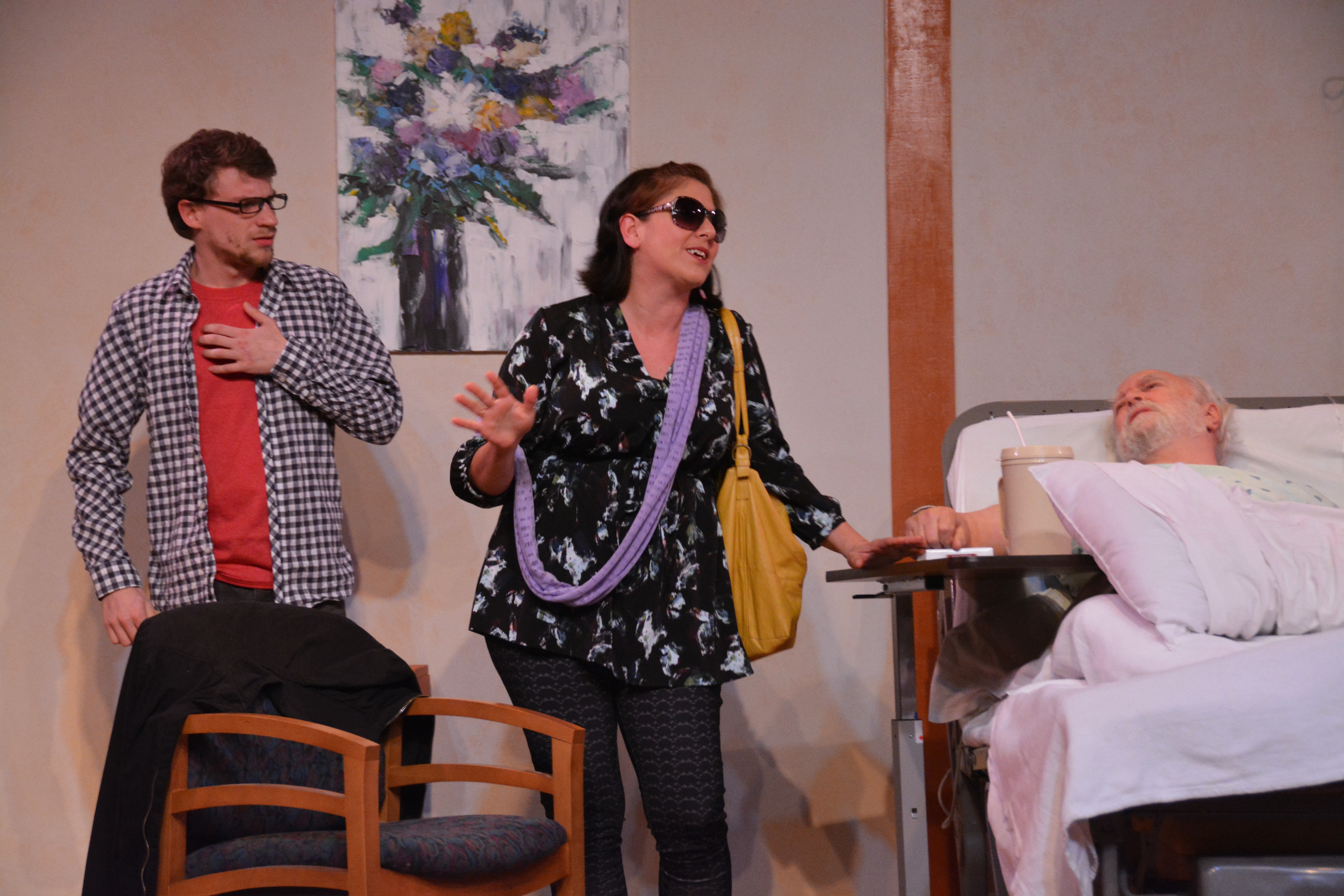 If comedy is tragedy plus time, then the most impressive achievement of “The Lyons” is that it generates loads of laughs from tragedies that aren’t buried in the past but are bracingly current.

Produced by Carol Piersol’s 5th Wall company, the show opens on family patriarch Ben Lyons (Alan Sader). He’s laid out in a hospital bed, dying of cancer, with his wife, Rita (Jacqueline Jones), at his side. But this is no maudlin death vigil: Rita cheerfully browses decorating magazines, eager to redo the living room after her husband dies, while hilariously profane invective flies freely from Ben, his impending demise removing all propriety filters.

When the couple’s children arrive, their surprise over their father’s illness quickly gets lost in recriminations, slights and revelations. Newly divorced alcoholic, Lisa (Sara Heifetz), struggles to stay on the wagon amid the emotional tempest while seemingly gay-and-happy Curtis (Lucian Restivo) has his cover blown regarding his own peculiar secrets. Curtis’s weirdness becomes the focus of the second act, leading to another family reunion at the hospital and more unexpected fallout.

Playwright Nicky Silver built this show around the character of Rita, played by Linda Lavin on Broadway. Director Billy Christopher Maupin wisely chose Jones for this marquee role and the local favorite propels the usual Jewish mother shtick into delightfully dark and kooky directions. When Ben complains, “I’m dying,” Jones’ comic timing makes Rita’s response of “I know but try to be positive about it” particularly hilarious. The ultimate kiss-off she delivers near the end of the show could inspire frustrated parents to cheer from their seats.

But while Jones gets the best punch lines, the ensemble’s other actors provide the heart that ultimately makes you root for these characters. Sader, who was a stunning “King Lear” for Richmond Shakespeare a few years back, delivers another monumental performance, even though he’s stuck in bed most of the time. Restivo holds his own, especially when he goes head-to-head with the father who’s never forgiven him for being gay. His character’s transformation provides a hopeful conclusion for the evening -- and thankfully Restivo doesn’t oversell it.

Perhaps the most welcome aspect of the production is the return of Heifetz to a major role. Her character’s struggle with the torrent of emotions provoked by these family situations becomes a mirror of the audience’s experience, and Heifetz skillfully navigates the bumpy terrain.

Maupin shows his casting skill in the margins as well, with Matt Hackman perfectly embodying a duplicitous real estate agent and Patricia Alli conveying depths of human experience in just a few scenes as a hospital nurse. The director has finely tuned his ensemble with one-liners, quips and cross talk all flowing seamlessly on opening night.

The lighting, sound and costume design elements are good, though unremarkable. A lengthy set change in the second act drags (set design by Joel Ernst) but earned an ovation from the opening-night crowd.

The Lyons family may be made up of tragic, troubled people, but this production of “The Lyons” turns every messed-up moment into a laugh, delivering another winner for 5th Wall.

“The Lyons” runs through Feb. 7 at the Richmond Triangle Players theater, 1300 Altamont Ave. Tickets and information are available at 5thwalltheatre.org.