Revenge of the Birds

A Henrico County street endures a Hitchcockesque plague of starlings. 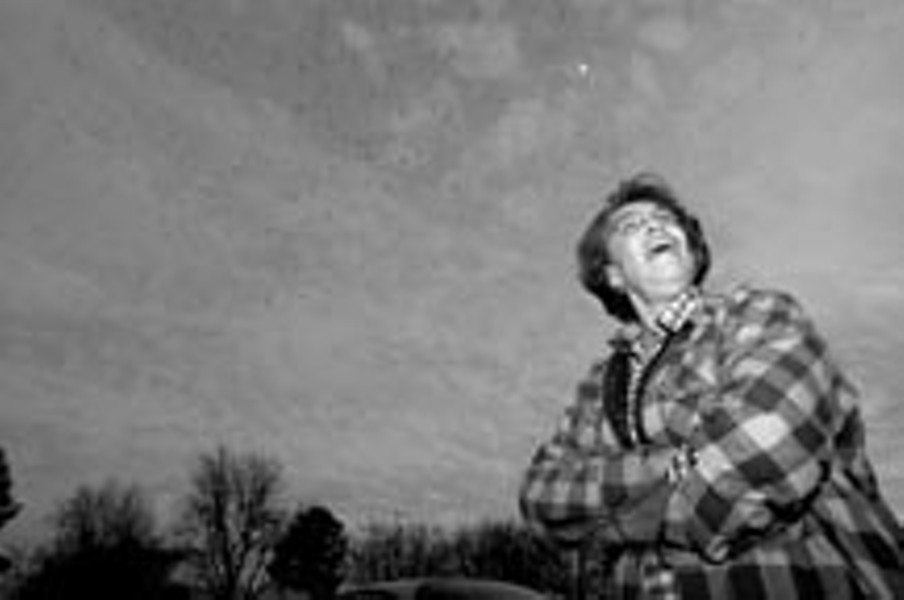 The shower of droppings and the ceaseless chirping are driving residents to distraction. "Man," says Richardson's husband, Randolph, the "birds took over."

On a recent Thursday at 5 p.m., the starlings begin assembling. In a perfect model of regional cooperation, flocks of tens and hundreds fly in from all directions — from Richmond, from Henrico County, from Mechanicsville — and roost in several tall trees across the street from the Richardsons' house.

"That's the way they start," Velmarine Richardson says, watching from her yard.

Their chirping grows in volume until it becomes a raucous roar. Then as the clouds turn pink, the birds fly up from the trees. They form anew into a few massive flocks and wheel together, high in the sky.

"Be careful!" shouts a neighbor when she sees Richardson and visitors standing in the front yard. Droppings fall like rain, pelting sidewalks, roofs and electrical wires, which twang when hit. Richardson's husband washes their two cars every day.

Despite the mess, the birds are a spectacular sight. By 5:20 they've become one enormous horde, flying in ever-wider circles. There are thousands — perhaps 5,000, perhaps 10,000. "They do just like this until they get settled," Richardson says.

A stray gust of wind blows a few birds close to the ground, tumbling them like leaves. The rest keep circling as the clouds darken. High aloft, they look like a swarm of bees. When they swoop lower, the beating of their wings sounds like wind in a forest. Lower still, and the sound is like crashing surf.

"Here they come," she says.

And at 5:38, the cyclone of birds touches down. Like frogs plopping into a pond, birds begin plummeting into the 20-foot evergreen hedge that runs behind the Richardsons' house and that of their neighbors. In a few minutes, all the birds have settled noisily into the branches, scuffling and twittering. Most seem to prefer the length of hedge that lies directly behind the Richardsons. "They pick on us all the time," Randolph Richardson says, watching from the kitchen door.

The birds talk to each other all night, Velmarine Richardson says, then disperse at dawn. Maybe when it gets colder, she says, they'll leave for a gentler climate.

Not likely, says Jeff Trollinger, watchable wildlife program manager for the state Department of Game and Inland Fisheries. Such large roosts of starlings are typical winter behavior, he says, and they won't disperse until early spring.

Why they chose the Apollo Road hedge is anyone's guess, he says. Perhaps someone cut down or disturbed the birds' previous roosting area and forced them to look for a new place to sleep. "This year they've decided that that's the place to be."

Such large roosts are common, he says — one just formed this year on the campus of United Methodist Family Services, next to the game department's headquarters. Is there anything the Richardsons can do to get rid of them? Not really, Trollinger says, but they can try.

Like the house sparrow and the pigeon, European starlings (Sturnus vulgaris) are a non-native, nuisance species. They were supposedly introduced to the United States from England in 1890 by a group that hoped to establish in the New World all the birds William Shakespeare mentions in his plays. The starling adapted easily to its new home and now can be found all over the country.

"There's no [legal] protection for them whatsoever," Trollinger says, so Virginians are free to go after starlings with bottle rockets, nets or shotguns — anything that's permitted by local law. None of these approaches seems to have a lasting effect. The Richardsons intend to ask the owner of the hedge, a ministorage facility on the other side of the alley, to trim the leaves so the birds won't be so sheltered. They may leave then, Trollinger says, but "all you're going to do is move the problem somewhere else."

Nothing thus far has dissuaded the Apollo Road flock. "I go out in the yard sometimes and do my hands like that," Richardson says, demonstrating how she flaps her arms. The motion unnerves the birds only briefly. Celebratory gunfire on New Year's Eve scared them away, but not for long, she says: "They came back the next night. They came right on back." S