Return of the Native

“Tamara Drewe” has a lot going for it but lacks polish. 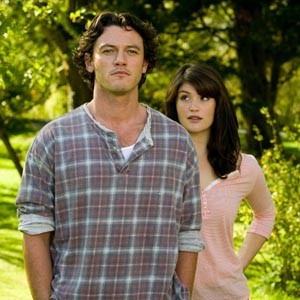 Tamara Drewe” is based on a graphic novel, but it plays on the screen more like a filmed stage play. It's tempting to call it a comedy of manners, but the comedy is very light. The movie might be most notable as an odd departure for the director, Stephen Frears (“The Queen”). While a bit more substantial than “ChAcri,” his most recent previous film, it's another near miss, enjoyable in fits and starts but too unpolished to add to the list of Frears' classics such as “The Grifters” and “High Fidelity.”

The primary reason is that it fails to develop a clear story and the main character that usually goes with it, even if the title implies those things. Tamara Drewe (Gemma Arterton) returns home to her family's English country estate after a long stay in London, where she received a nose job, transforming her from the town ugly duckling into a hot commodity. But Tamara's role in the movie's proceedings is scattershot. It's as much about the writers' retreat located across the way from her house, where celebrity crime novelist Nicholas (Roger Allam) holds court over a jealous wife (Tamsin Greig), a handyman (Luke Evans), a Thomas Hardy scholar (Bill Camp) and a host of other would-be writers.

These characters are the best thing about “Tamara Drewe.” The movie can be quite enjoyable moment to moment. Nicholas is particularly memorable as a pompous, cheating spouse who hops from mistress to mistress before plying his trade with Tamara, a girl he snubbed years earlier, who may or may not end up back in the arms of the handyman.

The least compelling thing about “Tamara Drewe” is the title character, utterly cute and forgettable as portrayed by Arterton, party to too many silly digressions, including a couple of kids (Jessica Barden and Charlotte Christy) whose pranks turn serious (and dull) when they try to break up Tamara and her new boyfriend, supercilious rock star Ben (Dominic Cooper).

“Tamara Drewe” had a lot of potential, with its terrific supporting cast and timeless premise of a person who returns to find her place in an ancestral home, an echo of Hardy. But it could have used some paring-down and focus in its adaptation to the screen, things that might have allowed it to fully live up to its pedigree. (R) 107 min.