The formula cartoon comedy returns with a bonus new show to follow. 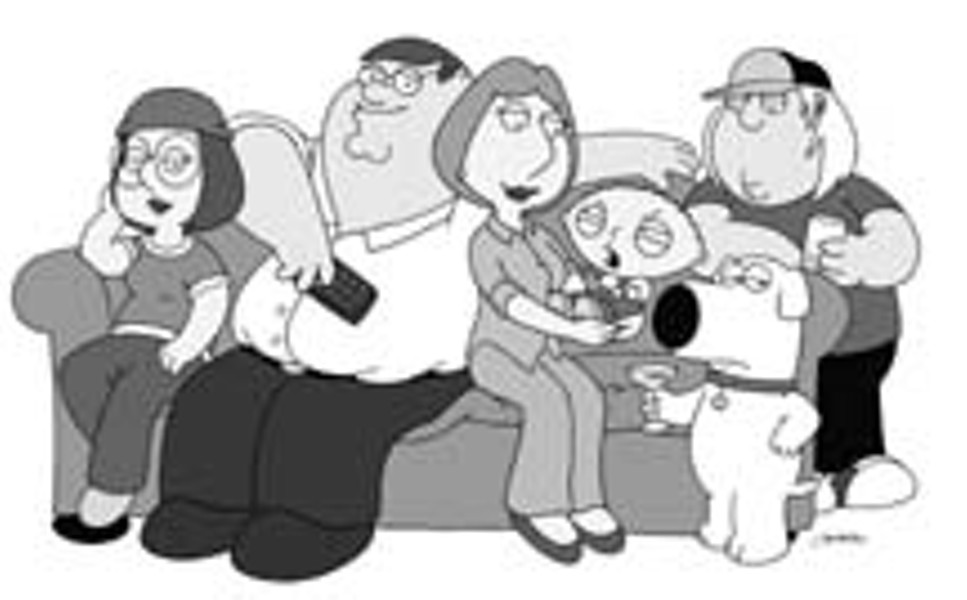 Fox wised up, and the first episode of the new "Family Guy" (Sundays, 9 p.m.) opens with father/boob Peter Griffin reciting for 33 seconds Fox shows that got canceled after "Family Guy" "made room" for them. That the list included other departed cult favorites like "Keen Eddie" and "Undeclared" is an issue for another column. McFarlane draws first blood — OK OK, the wisdom of the free market trumps the pinheads and their spreadsheets for once.

So let us enjoy this orange revolution of the airwaves. In the premiere episode, Rhode Island schlub Peter and his unfulfilled wife, Lois, go on a second honeymoon to rekindle the spark of their sex life (she keeps imagining he's George Clooney to keep herself interested; you may soon empathize). They leave the talking dog and talking baby, Stewie, in charge of the other kids. Spoiler alert! In between poop, snot, spanking, anal sex and hooker jokes, the sitters get revenge on a kid who gets older son, Chris, to drink at a school dance by planting drugs in his locker. Nyuks ensue!

Meanwhile, Peter and Lois derail Mel Gibson's plans to make "Passion of the Christ 2: Crucify This!," a "Lethal Weapon"-style buddy movie co-starring Gibson and Chris Tucker. This is amusing, until you remember that "South Park" did a superior Mel Gibson parody (and it's available from Netflix).

In fact, there are any number of shows, many of them even animated, that do everything that "Family Guy" does better. Hell, two of them are on the same night on the same channel! Its elegant comic pacing and some admittedly sharp moments aside, I must confess I'm almost as baffled by the appeal of "Family Guy" as I ever was, but hey, when has a slim popular majority ever been wrong?

But wait — there's more! In what clearly isn't a desperate exchange for McFarlane's return, Fox is premiering his new show, "American Dad," a half-hour later. It's a lot different from "Family Guy" — instead of a talking dog and a talking baby, it boasts a talking alien and a talking goldfish. This time the father is a boob named Stan Smith, a CIA agent threatened by his unfulfilled, impossibly hot wife Francine's new job as a Realtor.

Stan, a conservative given to shouting "Sweet Sean Hannity" when he sees a nice pair of hands (our man has a thing for digits), considers assassinating Francine but settles for ending the real estate boom with black ops instead. Along the way, he gets involved in "Bumfights"-style videos and other recent low-culture touchpoints.

Both shows strive admirably to be transgressive, and neither will keep you straight-faced the way "Stacked" does, but you kind of get the feeling McFarlane and Co. are hoping to be taken as a sign of the apocalypse rather than, say, analogues to a cheap novelty sign that's not quite as side-splitting as its owner thinks. S