Stuart Circle Hospital comes back to life — and what a view. 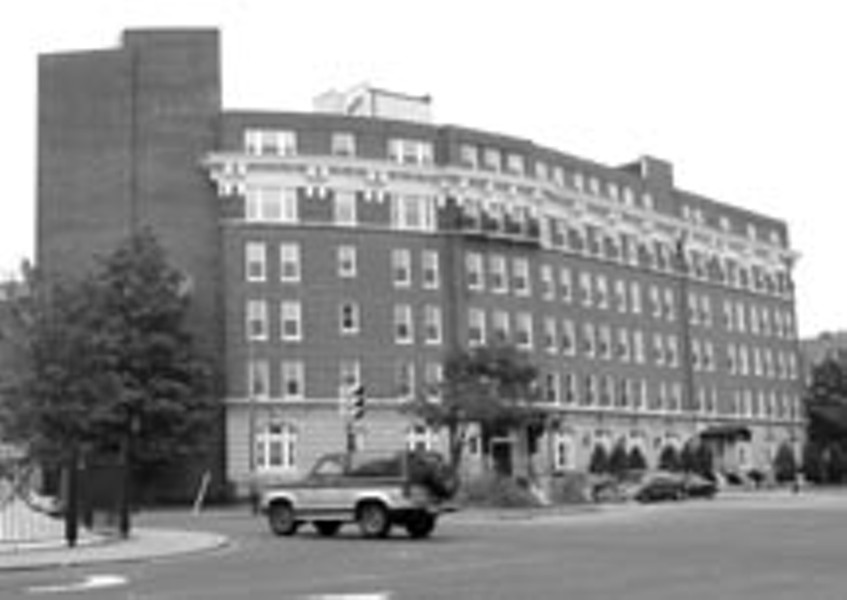 When the hospital was closed recently, there was disquietude, especially among residents of the Fan and tony West Avenue, about the vacant landmark’s prospects. Those concerns were answered earlier this month when One Monument Avenue officially opened its doors: The hospital is now a privately owned, upscale apartment building with 34 good-sized units.

The building’s handsome exterior adapts well as a container for gracious living. The six-story, red brick building, built in 1914, displays a last, exuberant, chest-beating gasp of architectural classicism before many top-drawer American buildings were given a more stylized or streamlined treatment during the 1920s and ’30s. It was designed by Charles M. Robinson, one of Richmond’s most prolific architects. He also created such beloved icons as the Landmark Theater, Miller & Rhoads department store and Thomas Jefferson High School.

At Stuart Circle, Robinson delivered a fully-loaded classical fa‡ade. There is a rusticated, sandstone treatment on the public street level. On the fifth floor the windows are incorporated in the entablature and immediately above this is a fully-articulated cornice supported with hardy, mannerist, paired brackets. An attic level tops this off.

The structure celebrates its site by curving to follow the sweep of Lombardy as it melds into West Franklin. This arc is a highly urbane architectural tour de force and makes One Monument Avenue perhaps the only building in Richmond whose form follows so faithfully and tightly the arc of the street it faces.

Both the main entrance and a secondary lobby are announced by spectacular iron and glass marquees that shelter front steps.

But while hardly obsequious, the building joins First English Evangelical Lutheran Church (also designed by Charles M. Robinson), the Stuart Court Apartments and St. John’s United Church of Christ as a handsome setting for the J.E.B. Stuart statue and its surrounding traffic circle.

To the passerby there are few hints of the changes that have taken place here. Preservation tax credits were part of the $13 million financing package so the historic fabric went largely untouched.

But step inside, and people looking for the old Stuart Circle will find little to remind them of its institutional past. This is a good thing because Stuart Circle, like most hospitals, was marked by a long, narrow hallways with a seemingly endless succession of doors. Commonwealth Architects and the project’s developer, One Monument Avenue L. P., eliminated the building’s block-long, arclike hallways. Where rooms used to line up like birds on a power line, walls have been removed to eliminate the endless hallway. The building has been reconfigured so that many of the apartments have rooms stretching across the structure with windows on both the eastern and western walls.

There are five basic apartment plans that repeat themselves on each floor. The apartments are generously sized with ceilings from 9 feet to 11 feet, depending on the unit. The building has three elevator wells and these allow for one lift to serve no more than four apartments per floor.

While the apartment layouts vary from unit to unit, there is one thing they all share (except those on the lower, plaza level): fascinating vistas. On the upper floors, one is drawn to the dramatic views of Monument Avenue, the Fan and downtown. Because this is one of the few high-rises in the vicinity, there isn’t much to block the views.

A number of units on the eastern side of the building also have outdoor terraces of various configurations and sizes. There are also three larger, outdoor common areas for the residents’ use.

All the living rooms have fireplaces (with gas logs), and the kitchens are equipped with top-of-the-line appliances. There are large, tiled bathrooms and ample closets. One of the glories of newly configured living spaces is that this is an old building so occasionally there is an extra passageway or quirky space to lend an element of surprise. This is in refreshing contrast to predictable, cookie-cutter floor plans found in most modern apartment buildings. Truth to tell, this building must have been like a Rubik’s cube that had to be twisted considerably to figure out the amenable floor plans. Kudos to the architects for their ingenuity.

Just a few blocks to the north, near Ginter Park, developers are looking at another former hospital, Richmond Memorial, to figure out how to turn that campus into a residential community. They would do well to examine One Monument Avenue: It sets a high bar for injecting 2lst-century life into a building that was found obsolete for its 20th-century use. S,/b>