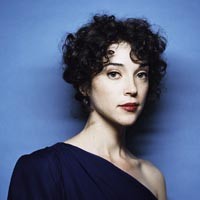 Annie Clark has a mean hook, and we're not talking about the musical kind. She recently decked a relative during an intense game of Wii tennis, she says: “I swear to God, I was just going for it and I hurt my poor sister. We all woke up so sore the next morning. It's clearly a sign a need to go to a gym once in a while.”

The image might surprise admirers of the doll-faced beauty, whose striking doe eyes match the intensity and intrigue of her gorgeous songs played under the moniker St. Vincent. The girl who takes her stage name from the hospital where Dylan Thomas spent his last hours is surprisingly lighthearted.

“I got really excited yesterday because I found out that William H. Macy is following me on Twitter!” Clark says. She adds: “I'm a huge David Mamet fan and he's been in most of his stuff. I wonder if he heard that I ripped off David Mamet all over this record?” The recording, “Actor,” is an exquisite array of music that was heavily influenced by Clark's love of film scores and a handful of literary greats.

“I can read. I like to read,” Clark says, laughing. “The refrain, ‘paint the black hole blacker,' is from Philip Roth's book ‘The Plot Against America.' There's also an E.E. Cummings reference in ‘The Bed,' and me knocking off Bukowski a little. You know, I like that he's brutal. There's something really visceral about his language.”

Clark's love of merciless things ends when it comes to movies — a surprise given that her duet with Bon Iver, “Rosalyn,” appears on the “Twilight Saga: New Moon” soundtrack. She's quick to point out that the vampire sensation is “really a love story,” and acknowledges in general that she's squeamish. “I like the concept of vampires, but I tried to watch ‘Let the Right One In' and I had to cover my eyes,” Clark says. “I'm a real wuss when it comes to violence and gore.”

One thing she isn't afraid of is taking on new projects. A.C. Newman recently invited her to be a part of the forthcoming New Pornographers album, “Together.” “They asked me to come in and play guitar on this one particular song, so I did,” she says. “I haven't heard the whole album yet, but what I did hear I think people are really gonna like.” The conversation then turns to a profound love of one of the band's more notable members. “The thing about Neko Case that's so compelling, aside from the talent, she seems like such a rad lady! It's like, you could have a margarita with her.”

While we're not sure if a happy hour is eminent, we do know that Clark's hopping a tour bus in support of “Actor.” “If I don't do it for a while, I get restless,” she says. “I can't think of any time recently that I was in the same place for a month. Even at home in New York, I'm trying make plans to travel and keep things fresh. I really like touring.” And, she promises: “This time, there will be a smoke machine. I mean, you can't really go wrong.” S

St. Vincent plays the Jefferson Theater in Charlottesville on Feb. 23 with Wildbirds and Peacedrums. Tickets are $13 advance, $15 day of show. For information visit jeffersontheater.com.