Out with the old, in with a slew across Richmond. 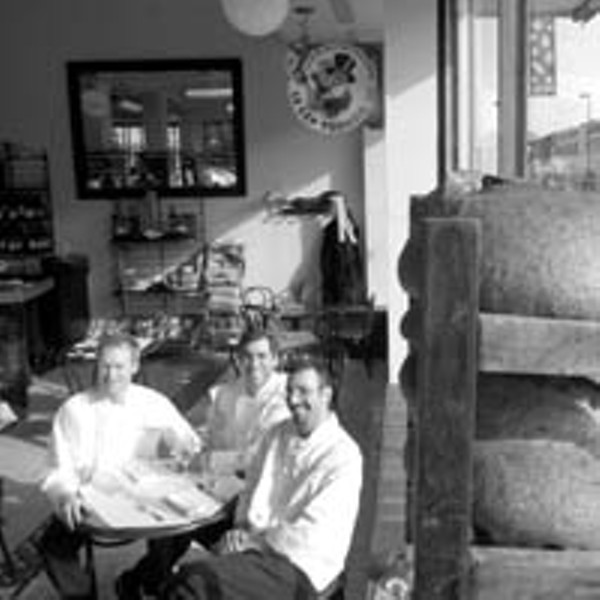 DoSe, the casually hip coffeehouse in Jackson Ward, didn't make it despite an energetic band of supporters. Another spot for scenesters, Tonic, closed but reopened with a new owner. Six Burner and Bistro R also changed hands but kept their successful formulas mostly the same.

Café Mandolin, whose chef, Nancy Cohen, poured heart and soul into her first venture, fell because of the harsh physical realities of daily cooking — which may have pleased customers (particularly vegetarians), but took a toll on Cohen, who continues to teach and cater.

A shocker in Rivah country, the groundbreaking Trick Dog Café went on the market earlier this month and closes its doors this week.

Diners didn't have to wait around for new menus, though. 1 North Belmont ushered in a new wave of French cuisine here and went directly to the top with awards and reviews. Foie gras protests out front apparently didn't hurt business, but they did raise awareness of an animal-rights issue that's not yet resolved within the agribusiness world.

Can Can avoided the conflict by keeping the dish off its menu. No restaurant here garnered more attention and interest than the splashy, gorgeous brasserie with its red banquettes, zinc bar and all the trappings of New York City's Balthazar. Can Can kept a usually packed house of middle-somethings raving about the frites and wines.

Not to be outdone, Sensi opened its Shockoe Bottom doors to a much-awaited encore for Paolo and Rhonda Randazzo, whose Franco's Ristorante in the West End gave them the motivation to try an upscale, nouveau-Italian dinner spot in glowing downtown digs. Jacqueomo's, a few blocks over, took on the palette of Mardi Gras, with a New Orleans-inspired menu and live music drawing a very different crowd than Tiki Bob's across the street.

Zuppa, the tiniest entry into Richmond's food scene this year, won customers' hearts right away with its simple approach and consistently flavorful soup and sandwiches. Chefs Adam Schumm and Bryn Purser agreed to take on a second venture nearby, The Green Olive Martini Bistro, set to open later this winter.

After waiting for many months for a restaurant to replace the popular DuJour in the West End, diners connected right away with the swank Escabar. The bistro at Libbie and Grove avenues added a covered patio, raw bar, martinis and upscale cuisine prepared by Chef Jeff Johnson.

Racine in the Fan introduced a French roots-foods menu at the formerly French Morgan's, and The Wooden Spoon changed up the Italian standards at the former Caffe di Pagliacci and installed a gallery and bar.

Smaller places such as Caribbean Mingles, Little Ochi Hide-out and Papa Ningo brought island flavors to a town that used to rely on ham biscuits and peanut soup as starters. Diners discovered that downtown they could get mofongo and stewed goat nearly as easily as Brunswick stew. And sushi spots sprouted across the city: Nara Japan on West Main, Osaka II near the Huguenot Bridge and Ichiban in western Henrico County all made an entrance into a crowded field. Thai food lovers watched Mom's Siam move down the street, Thai Curry House build on the Thai Diner empire, and Ginger add fashionable décor to the spicy neighborhood lineup of panang and noodles.

Trend-watchers crowded into 3 Monkeys, another in the Johnny and Katrina Giavos chain of successful restaurant/bars. The dynasty of Michelle Williams grew too, with Cha Cha's Cantina, Lucky Lounge and Michelle's at Hanover Tavern all opening in 2005 — with another on the way at the former Southern Culture. Sette brought pizza, martinis and an industrial-chic tone to Shockoe Bottom a few months before Bottom's Up Pizza returned to huge media fanfare in refurbished quarters.

The handsome, clubby Old City Bar reopened in Shockoe Bottom with Chef David Napier at the helm. Wine bars came to Carytown and Broad Street, with Bin 22@ Betsy's giving the popular coffee shop a new concept, and Enoteco Sogno pairing affordable, mostlyItalian wines with light fare in the space where Ma Musu's used to be.

Rowland opened in the former Stella's with a fine-dining menu of seafood and Southern-accented cuisine. The Greek Circus ended a long run and moved west to become the Circus Mediterranean Grill in Innsbrook, still operated by the Kefalas family.

In Goochland, The Edible Garden dedicated itself to fresh locally grown ingredients and contemporary cuisine, and Grandpa Eddie's took over when Diner 250 closed, serving barbecue and ribs and one of the area's wickedest desserts: a hot Krispy Kreme doughnut topped with vanilla ice cream and chocolate sauce.

South Siders welcomed Maldini's pizza and pasta to Westover Hills. The Corner Bar & Grill's down-home food became a hit with students and media types, catfish-lovers and those looking for a very juicy barbecue. Jumpin J's Java and General Store livened up a corner of Church Hill, as did Captain Buzzy's, both serving affordable fare to legions of regulars and paving the way for more food activity in coming months.

Lift and Twenty-Seven brought new life and appealing design to a section of Broad Street that's steadily changing from derelict to condo-crowded, giving gallery-browsers a place to linger and real-estate agents another selling point.

A few new places in the counties added dining options for suburbanites, not to mention the chains and the no-longer-new standbys all hoping for a year of busy nights.

Just when you'd think restaurateurs would get a little gun-shy about any more openings, several are preparing a whole new batch for 2006. (And you thought Richmond wasn't a food town?) Watch this space for details. S