Restaurant of the Year: Longoven

It’s edgy, unexpected and risky, and it’s making a statement in our dining scene. 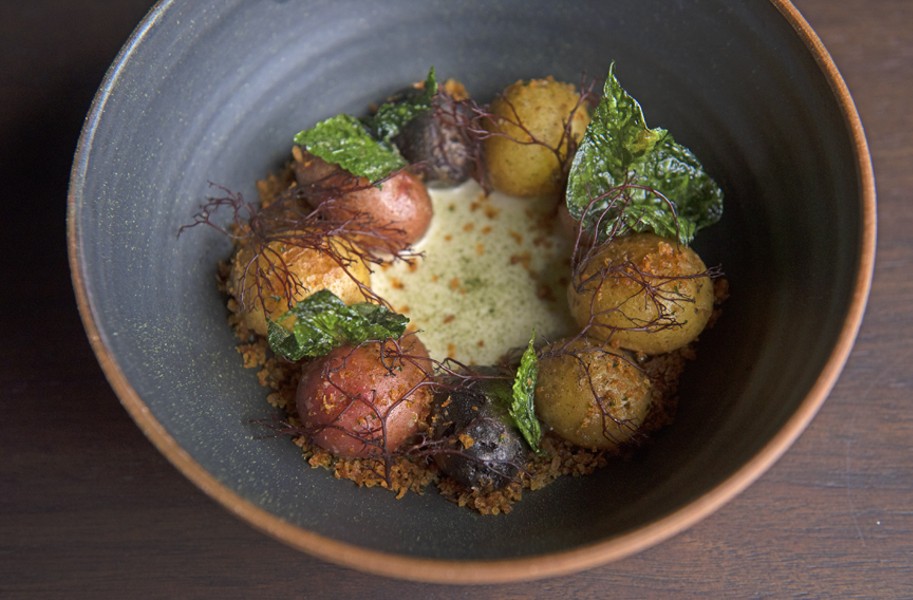 At Style, we gravitate toward risk with our Restaurant of the Year award. Past winners include chef David Shannon's idiosyncratic masterpiece, L'Opossum, chef Brittanny Anderson's visionary German-Italian mashup, Brenner Pass, and the restaurant that arguably led Richmond into culinary greatness, the Roosevelt.

You don't have to like Longoven's minimalist décor and small-plate food, or, frankly, even eat there, to respect it. The judges agreed that Longoven isn't particularly approachable, a term that seems to mean that the food is easy to understand and inexpensive.

But that's precisely why this restaurant is Style's choice this year. Eating there may not be for everyone, but with outstanding flavors, creativity and vision, Longoven's chefs and owners Andrew Manning, Patrick Phelan and Megan Fitzroy Phelan challenge Richmond to embrace risk and diversity in high-end eating. 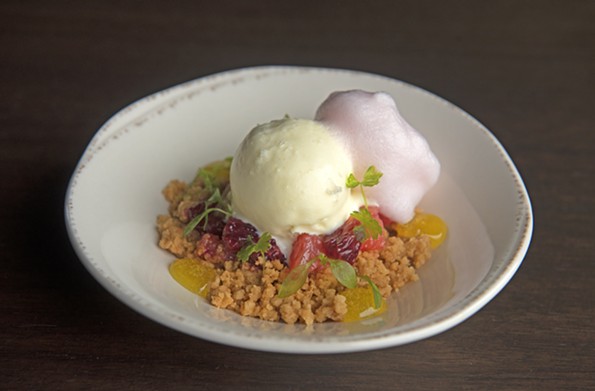 Not surprisingly, Richmond is holding back. Since opening last June, Longoven has been chasing the success of its sold-out pop-up series that earned national attention.

"We opened in July, had an amazing couple of months," says Patrick. "Then after Labor Day we felt the business tail off. We know it's going to take time to build a story and build a place that the diner trusts."

That dip is surprising for a city that lines up for new restaurant openings the way Hollywood lines up for film premieres. We have the most craft breweries per capita in the country, and have been named among the top food cities in the country by Zagat. It seems like every month Richmond is mentioned on some national food list or another. A spot like Longoven, which clearly models itself on Michelin-starred spots in bigger cities, would seem to be the next logical step in our dining evolution. 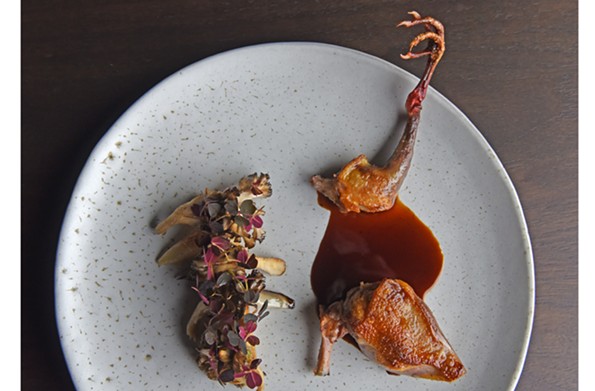 To understand what's going on here, let's go back to that word approachable. What does it mean, exactly? Does it, and should it, define Richmond's food scene? And is Longoven really not approachable?

On price, Longoven's small plates are in the same range as starters at Acacia, Brenner Pass, Lemaire, L'Opossum and Shagbark. Longoven doesn't serve big dinner plates of meat-and-three main courses, but the chef's tasting menu provides a full dinner. Longoven's tasting menu, at $165 per person with paired wines, is far less than the $200 option at Perch. That makes Longoven financially approachable for diners used to visiting Richmond's high-end eateries.

As for the concept, the food at Longoven is exciting. It's bold, with unexpected dishes like slices of perfectly cooked octopus layered with fingerling potato and sprinkled with pickled onion and tiny pearls of egg white. A corn custard topped with blue crab, shiitake mushroom and grated egg yolk is a sublime re-imagination of classic Virginia flavors. The mixed-grain risotto of "seeds," stinging nettles and cheese takes comfort food uptown.

The plating is streamlined and artistic, with clean colors and carefully placed garnishes. Eating here is like nothing else in Richmond, which may make it feel unapproachable for those afraid to gamble more than $100 on an evening of unknowns.

But for adventurous eaters with means, Longoven is impressively high concept. If the Michelin judges came to Richmond, Longoven is one of the first places they'd check out. 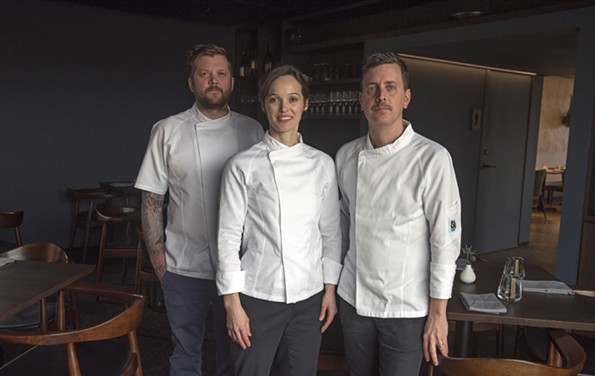 "Hospitality strives to take you to a place for a brief period of time to enjoy possibly the most habitual experience we have on this planet," Phelan says. "When you come in here, a small part of you has to be willing to surrender yourself to the experience."

As our judges talked about Restaurant of the Year, it became clear that what's approachable for one person is not necessarily approachable for another. In other words, we were having a conversation about diversity. And, as Richmond is currently struggling to understand in both social and political venues, successful communities thrive on diversity. 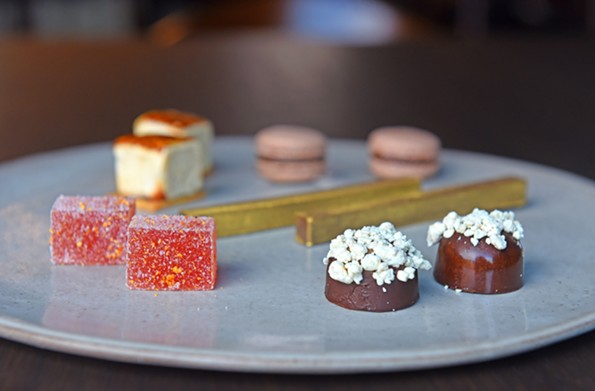 Richmond may congratulate itself on finally being on par with the South's great restaurant towns like Charleston or Asheville in the Carolinas, but the truth is that our most beloved restaurants tend to look about the same: Chefs riff on variations of upscale but familiar farm-to-table Southern dishes. The food is delicious, and their success is well-deserved. But we need more dining diversity.

There are some notable exceptions. Richmonders didn't know we wanted German food until Brittanny Anderson showed us. David Shannon outright flaunts gay subculture at L'Opossum, to the delight of diners and James Beard judges. ZZQ's outstanding success was born of Chris Fultz's single-minded, decades-long obsession with brisket. Pho Tay Do and the surrounding small Vietnamese eateries on Horsepen Road are beloved institutions. 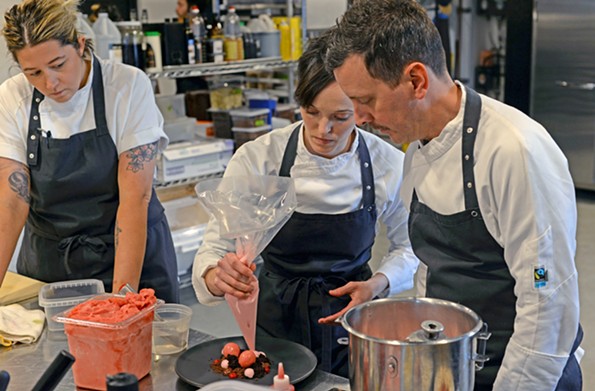 But those are points of food diversity in a town that overwhelmingly likes dinner — especially an expensive dinner — to be safe, predictable and approachable.

Our chefs pay the price for this limitation. Several chefs at Richmond's destination eateries have complained to me that they have to reel in their creativity in order to attract diners.

These are diners whom I've heard say: "When I spend $100 on a meal, I want it to be something I know I'll like," and "Eating at Longoven was confusing. There was no big plate so I felt like we didn't actually have a real dinner."

The success of artsy concept food influences a town's entire dining scene. In seeing that risk rewarded, other chefs are encouraged to share their own self-expression, then diversity expands and a city becomes a world-class dining destination.

By choosing Longoven this year, Style invites Richmond to grow beyond the familiar food experiences. Let's each try something new on a menu this year. Trust what the chef is telling you and order the special. Seek out a cuisine you don't know. Support a minority-owned restaurant.

Richmond can explode its food-scene trajectory, if we just embrace a little more risk.