Restaurant of the Year: Adarra

A soul-satisfying take on Spanish food that is bold, warming and creative.

Scott Elmquist Style’s Restaurant of the Year, Adarra, features a take on Spanish food that is “bold, warming and creative.” Pictured is its shrimp with chili pepper and garlic sauce and parsley.

When L’Opossum chef David Shannon recently checked into Adarra, he posted two words: “THE BEST.” When I braved the opening day crowds at Whole Foods and ran into the food editor who’d made me a restaurant critic nine years ago, her response to hearing that it was nearly Restaurant of the Year decision time was immediate:

Right, indeed. Think back on Richmond’s dining scene before the Basque-influenced Adarra opened and it’s safe to say that we had no idea what we were missing. Fortunately for eager mouths, chef Randall Doetzer did. As critic Phaedra Hise sees it, “I admire that Adarra is all in on a very specialized concept and one I haven’t seen elsewhere in Richmond. Doetzer’s take on Spanish food is bold, warming and creative.”

There are many reasons why Adarra is Style Weekly’s 2020 Restaurant of the Year and every one of them tickles the taste buds, proves Doetzer’s mastery of ingredients and showcases the superb skill he’s been putting into food since he first got the attention of food warriors at Julep nearly a decade ago.

Back in 2011, I met Doetzer just as he’d come on board as the new chef at Julep’s New Southern Cuisine — this was during Julep’s prehistoric Shockoe Bottom days, kids — and his passion and talent were already in full flower. Although the occasion was a farewell party for the house mixologist, the chef wanted to talk food and had the show-and-tell to back it up.

First, he brought out some of the cheeses he’d been making and I still recall the aged goat cheese with fennel as having the kind of swoon-worthy flavors and mouthfeel that cause eyes to close with pleasure. Next, he came bearing a spoon of fleur de sel and laid it on the table like a prize, inviting us to taste grains of the salt, the better to savor its purity of flavor.

Finally, to drive home his point about needlessly complicated cooking, he disappeared into the kitchen, returning with two plates: one held a sliced Sungold tomato and the other, chunks of fresh fig. “That’s the two best things I could serve you right now,” he announced with complete assurance. “Nothing I could cook would taste better than that.” Given that it was August and both had been picked that morning, it was impossible to argue his point. Even right out of the gate, Doetzer’s respect for ingredients bordered on the fanatical.

After running into him around town twice in subsequent weeks — both times, he’d been insistent that I come try his food, assuring me I wouldn’t be sorry if I did — I returned to Julep’s for a memorable meal. Afterward, when he came out for an assessment, I raved about his flavors and combinations. “Told you,” he’d said with a grin, a comment that could have been construed as cocky had he not been absolutely correct.

When we named Nota Bene our 2017 Restaurant of the Year, it was with the explanation that the restaurant had “a kitchen full of risk takers, led by chef Randall Doetzer, who aren’t afraid to experiment with wildly divergent ingredients.” His momentum was building.

Fast forward to February 2019 when Doetzer finally had the opportunity to open his own place with his wife Lyne. Choosing a Jackson Ward location and a name evoking the Spanish mountain that overlooks San Sebastian, the 30-seat Adarra is a love letter to Basque country, written in plates and bowls meant to be shared. And while portions are generous, because every dish dazzles with nuance and flavor marriages made in heaven, sometimes it makes more sense just to order two of the same dish to ensure shareability. 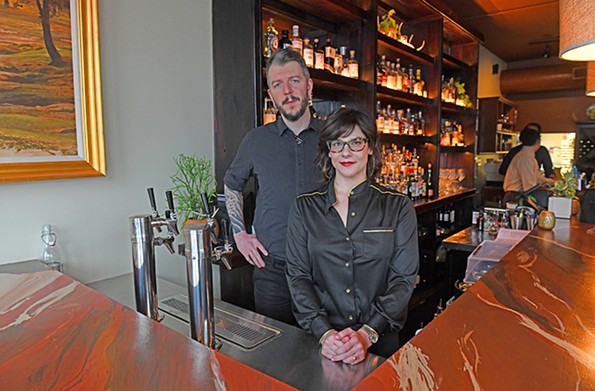 Whether it’s savory fish stew, earthy gnocchi with mushrooms and ricotta or a hearty bowl of tuna conserva in lima bean ragout, it won’t be solely those with Spanish roots who respond to it as comfort food of the highest order. “It’s oddly comforting without being true comfort food,” Hise says. “Plus, he’s a master of interesting flavor combinations that are truly delicious, not just going for effect.”

Adarra’s modern take on traditional Spanish food is enhanced by a cozy dining room with warm terra cotta walls, the exposed brick typical of the neighborhood and a bar hand-painted to resemble marble in soft, neutral colors. Dim lighting sets the mood and the furniture is comfortable enough to encourage lingering, whether it’s date night or just another weeknight. In addition to a strong cocktail program, the restaurant’s wine list nods to both husband and wife being level-two sommeliers, leaning strongly in the direction of natural, biodynamic and skin-contact wines.

As for how small, chef-driven restaurants fit into Richmond’s dining scene in 2020, not everyone is sure it’s a sustainable model. Hise, for one, says the trend has run its course elsewhere in the country and will begin to filter down to Richmond. “Diners are a little weary of getting an earnest lecture from the menu or the server on the political correctness of their plate. They just want a nice evening out and a delicious meal,” she explains. “I think restaurants like Adarra may be changing that narrative because they focus less on the provenance of the ingredients and more on ‘Eat this, it tastes good.’ And it does.”

During the peak of strawberry season in June, Doetzer’s strawberry ice cream captured the perfection of fresh-picked berries married to heavy cream and not a whole lot more. In many ways, a direct line could be drawn from those long-ago pieces of tomato and fig to the simply sublime ice cream.

Not to repeat myself, but after at least half a dozen meals at Adarra, my advice is the same as it was when I reviewed it last April. Settle back in your seat, order everything that appeals and eat until you can’t. Doetzer may not bother with needlessly complicated cooking, but you can count on his use of local ingredients to produce the kind of soul-satisfying food that could only be enhanced by being on Spanish soil. The result, as has been noted, is the best.

Back to State of the Plate