Scott Elmquist More than 700 people come together at the Virginia State Capitol to protest detention facilities and the Trump administration’s immigration policies.

A few feet away from the black "RESIST" shirts and posters reading "Nobody is illegal on stolen land," 6-year-old Ruby Hampton confidently grips a crimson sign with white block letters that reads "Families belong together."

People congregate around her on the steps of the Virginia State Capitol during Richmond's Lights for Liberty vigil July 12, one of hundreds around the country protesting detention facilities and family separation.

Ruby's father, Vincent Hampton, flew up from Florida and says there was a long talk on the way to the protest about why they were there.

"They were all dead silent, listening very hard," says Hampton.

Briar Harris Chatterjea recently moved back to Richmond after 14 years in India, where she was an activist and teacher at the American Embassy School in New Delhi. Now she works for the Latin Ballet of Virginia.

"I want to find out how we in Virginia are helping to better the conditions of the people that are already here that are 'other than.'" Chatterjea says. "I completely disagree with splitting up families. … It is demeaning and hostile to treat others in that way."

Members of Rise Up Sing Out, a social-justice choir, are together in a corner. The group's director, Jamie Kilpatrick, has a personal connection to immigration — her sister, a lawyer, represents Honduran* immigrant Abbie Arevalo-Herrera, who's been living in sanctuary at First Unitarian Universalist Church since June 2018.

"There are so many stories about rape and sexual abuse and psychological trauma and it's just horrifying," Kilpatrick says of the detention facilities, her voice breaking slightly. "I can put a face to it. … I see Abbie's children."

The first scheduled speaker, a Deferred Action for Childhood Arrivals recipient, is unable to attend due to speculation that Immigration and Customs Enforcement officers may be present. Her friend Monica Hutchinson speaks on her behalf.

"Our journey is lonely and fragile. I now have to focus on surviving and protecting my loved ones," she says, reading from a prepared statement. "I have one last semester in college and all I can think is if I can make it."

Laura Pho, who hosted the event, reads the testimony of an unnamed former Department of Homeland Security employee, who left the agency after 10 years because of President Donald Trump's immigration policies.

"Migrants crossing the U.S.-Mexico border was a manufactured crisis," she reads. "The child separation policy is Trump's policy and represents the darkest days in modern American history. DHS has no plans to reunite these children and the trauma will be generations long."

Meant to be the final speaker, Arevalo-Herrera speaks via Facebook Live. She describes her experience in a detention center, recalling the cold temperatures that have earned such facilities the term "icebox." Due to technical difficulties and time restraints, her speech is cut short. The full video is available on the Hands Off Abbie Facebook page.

Ending the evening on a positive note, Kilpatrick begins singing "I'm sending you light, to heal you, to hold you" and crowd members join in.

Luu Doan, a Vietnamese refugee and Pho's mother, looks on in admiration. Doan says she felt accepted as an American when she arrived in 1979 with only $100 in her pocket. She believes it's her duty to show up for those who don't have the same experience.

"I know what freedom feels like. … I learned I need to speak up for your rights to be treated equally like everyone else," she says through a translator. "I keep thinking about them and that's what keeps me going." 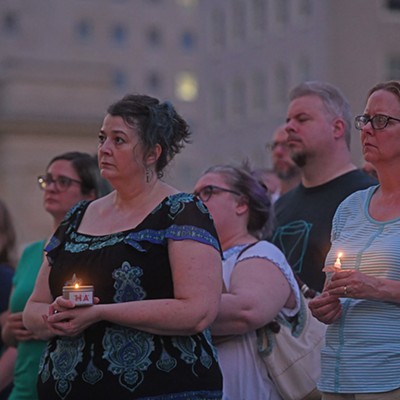 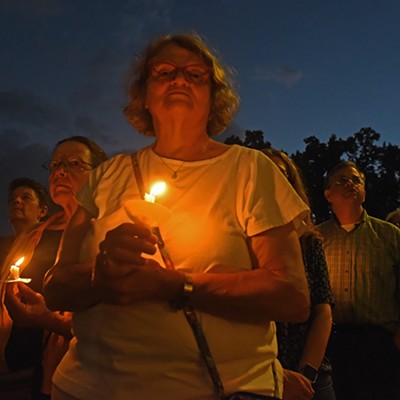 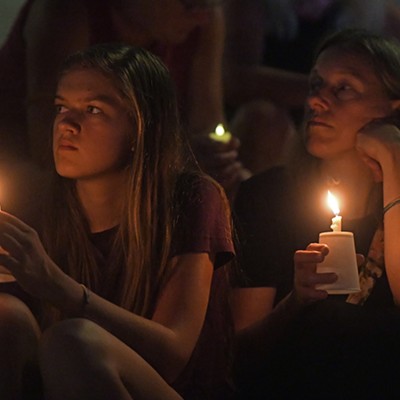 Lights for Liberty
By Scott Elmquist
Click to View 16 slides

*A previous version of this story incorrectly identified Abbie Arevalo-Herrera as Guatemalan.