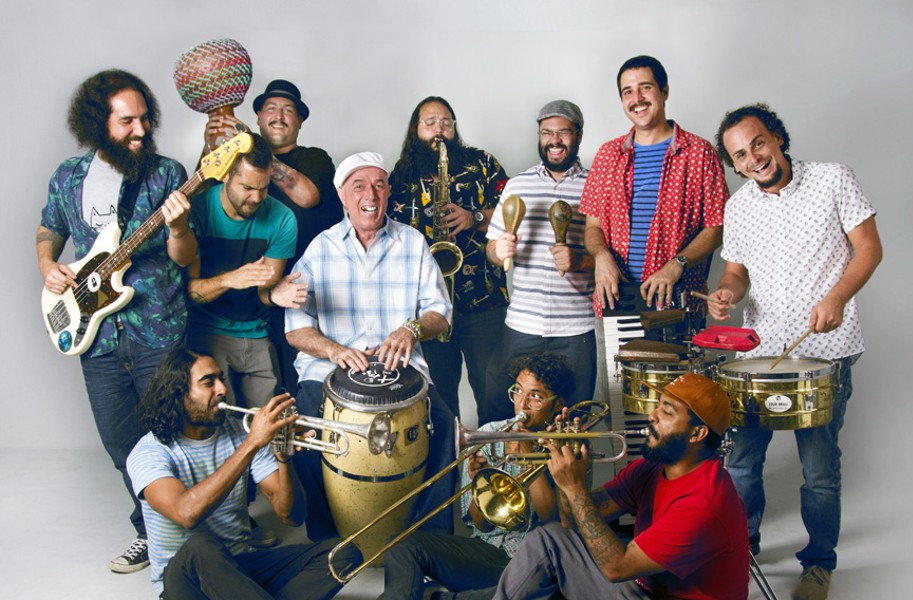 Orquesta el Macabeo's appearance at the Richmond Folk Festival is the last U.S. stop on a tour celebrating the salsa group's 10th anniversary.

Its longevity is more than just the continuation of the group's name; seven players on their first album are still with the band. And it is more than just coloring within established genre lines. "We understand the rules," says bajo player Jose Ibanez. "But if something else sounds musically amazing, why not? No one is going to die."

In that sense they are like transgressive Richmond salsa band, Bio Ritmo.

"Yeah, we are brothers" say Bio Ritmo pianist Marlysse Rose Simmons. The bands played host to each other in their respective regions. "For us, it was so awesome to discover Macabeo because they were a band doing salsa their way, coming like Bio Ritmo did from punk-rock roots."

Neither band fit the hyper-polished production and fixed rhythms of the old school New York and Puerto Rican salsa approach and both were criticized by traditionalists. "More important," Simmons says, "it opened the music to a new wave of listeners."

"We started this band because we wanted to have fun with friends," Ibanez says. "We started by playing the old salsa tunes we love, then began writing new songs with our own perspective. We have a lot of different backgrounds and tastes. And I don't hear what the keyboard player hears. Our songs are not clones of any others. We are super happy to find our own sound."

For the past year, in the aftermath of Hurricane Maria, the challenges have been huge.

"It affected all of us, from the center to the corner," Ibanez says. "Life here is talked about as before and after the storm. It was like an earthquake that went on for 10 or 12 hours. I thought my concrete house was going to break."

The worst part came later: darkness from the destroyed power grid and water poisoned by garbage and dead animals. Then, gradually, normalcy returned. The band started practicing again, using a portable generator, even though getting together required long trips on trashed and unlit roads. "This part of the Puerto Rico scene you aren't hearing much about on the evening news," Simmons says. "Those who stayed on purpose after the hurricane to make sure their home and culture survived — everyone helping each other out. Because of it, the Puerto Rican music scene is really thriving right now, thanks to bands like Orquesta el Macabeo."

The group's plan is to have a big, final anniversary tour show on the island.

"Now is the time," says Ibanez. "It is only your 10th year [anniversary] once." Then it will be back to working on new music. "[The material] won't be about the storm, but everything around it. Maybe funny, maybe sad. We won't try to force it."

In the meantime, there is the Richmond Folk Festival, and a performance rebounding off the pure, positive energy of Puerto Rican resilience.

What should people expect? "They are rocking it right now," Simmons says.