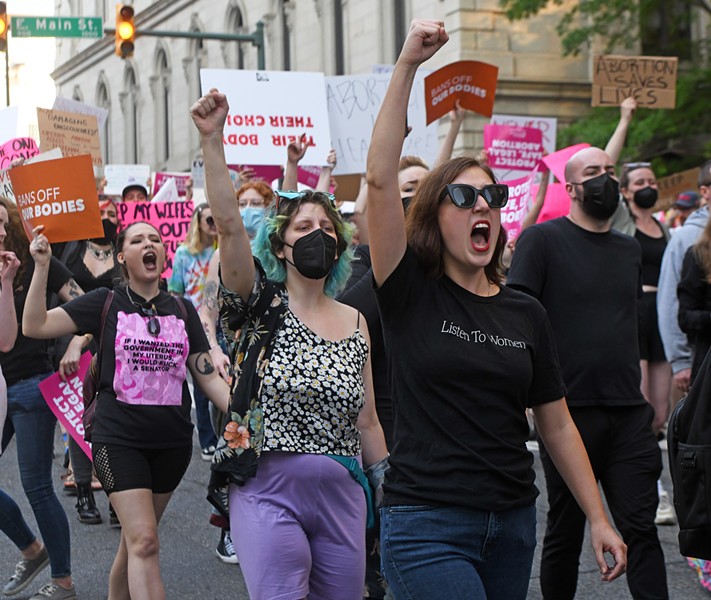 Hundreds of protesters carrying signs that read “Thank God For Abortions” and “If I Wanted Politics in My Vagina I’d Fuck a Senator” gathered on Tuesday near a federal courthouse in Richmond to protest the potential repeal of Roe v. Wade.

Roaring chants like “Abortion is Healthcare” and “Our Body, Our Choice,” members of the gathering marched for several hours around a few blocks downtown, where they were met with honks and shouts of approval from passing cars. 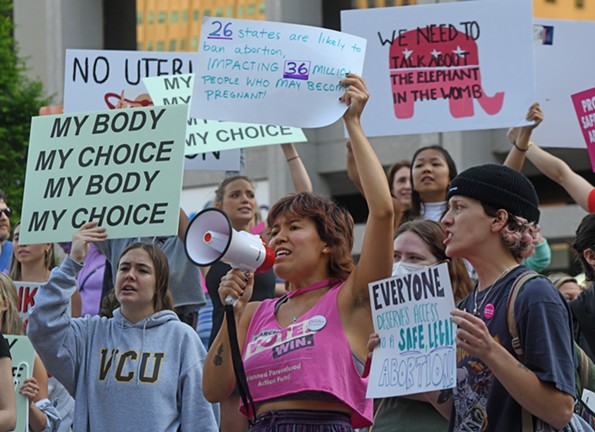 Organizers such as Rae Pickett, communications director for Planned Parenthood Advocates of Virginia, encouraged the crowd to get angry about Justice Samuel Alito’s recently leaked decision draft that, if approved, would overturn the 1973 ruling that legalized abortion nationwide.

“We're here today because we are very concerned with what is about to happen in the Supreme Court based on the recent leak of Justice Alito’s opinion in the Roe v. Wade case," Pickett said. "We are discouraged, we are angry, but we are ready to fight."

The event Tuesday was hosted by Planned Parenthood Advocates of Virginia in conjunction with several other Virginia organizations that support reproductive rights for people with uteruses, including the ACLU of Virginia, Progress Virginia and Equality Virginia. According to Pickett, the goal was to remind people on the ground and those in power that Virginians still have the right to access an abortion today.

“Our focus is really to mobilize this base, to really educate these folks and get everybody up to speed on just what exactly is happening," Pickett said. "And to remind people that abortion is legal in Virginia. Planned Parenthood Advocates of Virginia is going to do everything that we can to make sure that that doesn't change.” 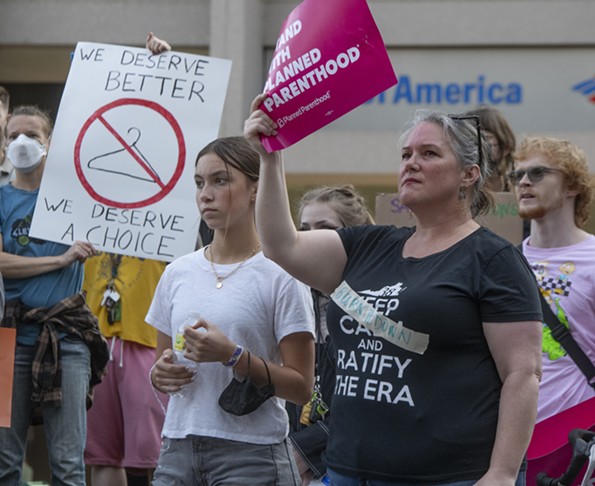 Kathy Green, one of the protesters at the event, is a retired nurse who remembers when abortion was illegal. She says lives will be lost if the justices’ decision is finalized, just like they were when she was young.

“I am almost 65 and really thought that Roe was a done deal. I guess I was naive," Green said. "I love people who have uteruses and are fertile, and I'm terrified for them. This is terrifying."

Speakers at the protest were enraged by the potential repeal of their right to reproductive freedom including former Democratic Del. Lashrecse Aird, who is running to represent Virginians in the state Senate.

“I'm out here today because it's unreal to imagine that, in the year 2022, we would need to protest for what is a basic human fundamental right. And that is the right to choose,” Aird said. “It is heartbreaking when I think about Black and brown women that are literally still dying with the protections that are in place and someone would dare roll [them] back even more ... I can’t sit idly by and watch that happen.”

Protester Bo Bellotti also emphasized that abortion is an issue that affects all genders, and called for the inclusion of trans men and nonbinary people in conversations about the future of reproductive rights in Virginia.

“I am a trans masculine person who has needed access to emergency contraceptive care. And there are so many others like me," Belotti said. "So I implore you all, when you talk about what we're doing today, when you rally your friends and family around this cause, to remember that trans and nonbinary people are also in need of this access."

The draft decision protesters rallied against has not been officially released, though the case has concluded in the Supreme Court. Abortions in Virginia remain legal and available at Planned Parenthood. To access this and other reproductive care, visit plannedparenthood.org