Now in its third year, a local festival of Native American film looks for momentum. 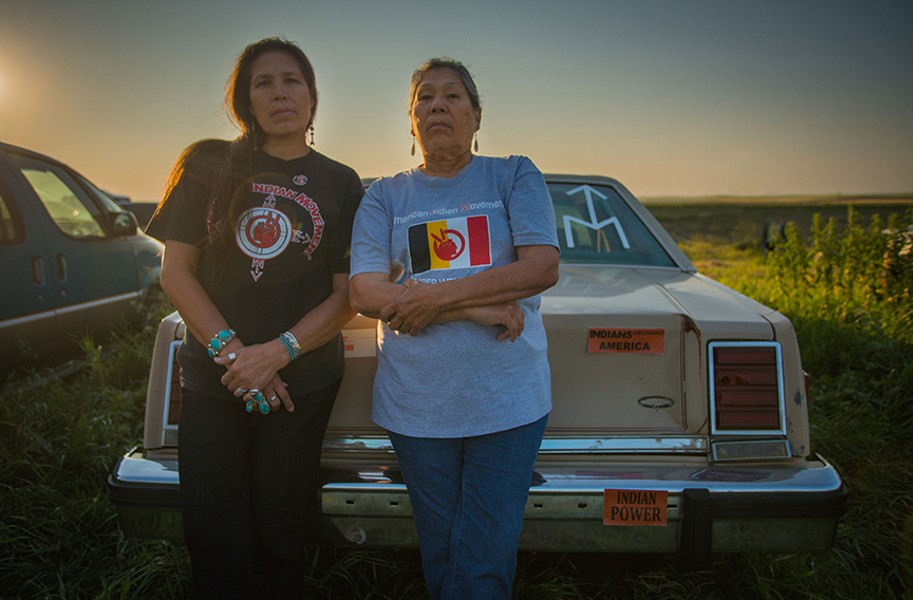 A still from “Warrior Women,” the story of Madonna Thunder Hawk and her daughter Marcy who were organizers of the American Indian Movement (AIM) in the 1970s. Sunday, Nov. 24 at 7 p.m. at the Pocahontas Reframed Fest.

The documentary tells the story of Sacheen Littlefeather, now a 72-year-old White Mountain Apache and Yaqui elder, who appeared at the 1973 Academy Award ceremony to share a statement from Marlon Brando protesting “the treatment of American Indians in the film industry,” that was televised to the world. In addition to revisiting one of the most memorable and controversial moments in the history of the Oscars, Sacheen’s voice is joined with modern-day Native American filmmakers determined to make their voices heard.

Bradby Brown, the director of the all-volunteer festival, considers choosing the films for the festival to be the most rewarding part of his job. He screens 40 to 50 films annually to put together a diverse program for the public.

He’s referring to films such as Christina King and Elizabeth Castle’s ‘Warrior Women,’ the story of Madonna Thunder Hawk and her daughter Marcy, who were leaders in the American Indian movement in the 1970s. Also Shelly Niro’s film, “The Incredible 25th Year of Mitzi Bearclaw” tells the story of a young woman leaving her new life in the city to return to the reservation to care for a sick parent. Susanna White’s “Woman Walks Ahead” is based on the true story of Catherine Weldon, a widowed artist from New York who traveled alone to North Dakota to paint a portrait of Chief Sitting Bull in the 1880s, only to be met with hostility from the Army. Darlene Naponse’s “Falls Around Her” follows legendary singer Mary Birchbark as she returns to the vast wilderness of her reserve to reconnect with the land and her community.

This year’s festival is the third and each year the festival has grown in attendees and sponsors, with last year’s attracting over 1,000 people and a goal this year of 1,500.

“The thing that hasn’t changed is the amazing support from the American Evolution 2019 Commemoration group,” Brown says. “Their support has insured that the festival can continue to grow into the future.”

The American Evolution 2019 Commemoration pays homage to the 400th anniversary of several key historical events that occurred in Virginia in 1619 that continue to influence America today. The Pocahontas Reframed Storytellers Film Festival is a legacy project of the commemoration. Because Virginia Indians met the English at what is now Jamestown in 1607, it would be impossible to tell the story of 1619 without including the story of the Virginia Indians, just as it’s impossible to tell the story of America without including the story of Native people.

But the festival is more than just a nod to Virginia’s history. According to Brown, representation matters because it impacts how people interact with their fellow Americans and how children are educated. He says it also shapes our path forward as a democracy.

“Storytelling and filmmaking have suffered from a lack of representation of important groups that influenced American democracy, notably Native Americans,” Brown says. “Native culture is rich, steeped in history and multifaceted, yet mainstream films do not often capture this nuance.”

In addition to films, the festival includes several performances. On Saturday, Darren Thompson, a Native American flute player and storyteller, will perform, as will the Warriors of Anikituhwa showcasing the Cherokee war dance and eagle tail dance. Another facet of the festival is master classes offered to explore Native filmmaking with professors from Virginia Commonwealth University and the University of Richmond taking an in-depth look at certain films. The UR master class is a symposium called Through an Indigenous Lens while VCU’s master class takes place at VMFA and focuses on the John Ford classic film “The Searchers” with a conversation focusing on the film’s revisionist and cinematic elements.

As film festivals go, the Pocahontas Reframed Storytellers Film Festival is a great deal. General admission tickets cost only $20 and provide access to the more than 20 films. A VIP pass is $50 and includes access to the master classes, the museum screening and a private reception. Not to mention that the experience of seeing these films on the big screen at the historic Byrd Theatre can’t be matched.

The films Brown picked cover difficult topics such as genocide, the boarding-school era and the adoption era where children were removed from reservations.

Mainly, these films show the strength of spirit that keeps Native people continuing to fight for their rights as human beings,” Brown says. “For both the Virginia Native community and the general public, the festival offers both education and entertainment value.”