Hilary Swank does her embattled female thing one more time in “Conviction.” 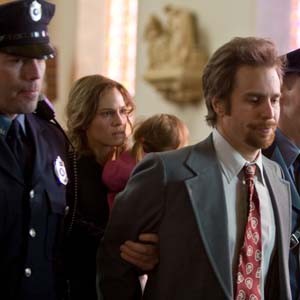 Audiences can be forgiven if they roll their eyes at “Conviction,” starring Swank as Betty Anne Waters, an embattled small-town girl so determined to free her brother Kenny (Sam Rockwell) from prison that she seeks out a law degree despite lacking credentials as basic as a high-school diploma.

This is Swank's third film about a determined female taking on the world in four years, although “Conviction” wins hands-down as the least tastefully titled. But while “Conviction” isn't a great movie, it isn't great despite Swank, who consistently makes the film's more convincing portions a moving experience. There's a reason beyond vanity that she gets these roles: It's difficult to admit, but she's good at them.

The movie is best in its first half, jumping between different periods in Betty Anne and Kenny's life. Sometimes you have to pay close attention to the crow's feet to tell which era it is, as the movie mixes samples of their childhood, their brief time as struggling but happy adults, and the present-day imprisonment of Kenny. The nonlinear narrative isn't just a gimmick. It arranges the events like a memory, so that they all come together in one seamless tragedy: the broken neglect of growing up without stability; being written off by society; the crushing weight when that system comes down on their lives. A lawyer wants $25,000 up front to defend Kenny at his trial. “If I had that kind of money,” he jokes to Betty Anne, “I'd buy a yacht.” Such nonchalance might seem ignorant considering the stakes, but then you just saw the two as kids admiring the splendor of a neighbor's single-wide.

Betty Anne's story turns on the shocking conviction of her brother for murder and his subsequent attempt to take his own life in prison. The sorrow of these events is sensitively handled and effective. No other film this year has earned its tissues like this one, and at least half the credit belongs to Swank. The story makes Betty Anne's emotions plausible, and Swank makes them believable when they pour out onto the screen. This kind of thing might have become a habit for the two-time Oscar winner, but this isn't a routine performance.

When the movie lurches into its second half, however, it begins fulfilling conventional plot obligations while Betty Anne marches through the legal system. Conflicts and resolutions are dutifully called to the stand. There's the disapproving husband (Loren Dean); the neglected kids; the self-righteous prosecutor (Talia Balsam); the possibly corrupt cop (Melissa Leo); the new best friend (Minnie Driver); the crusading New York lawyer (Peter Gallagher) who might be able to help with DNA evidence; numerous tantrums when nothing seems to work. And, of course, there's the dreaded moment of complete hopelessness when all seems lost.

“Conviction” is “based on a true story.” Does that mean all this stuff is conveniently true? And so what if it is? What writer Pamela Gray and director Tony Goldwyn (and a lot of other filmmakers) don't realize is that “based on a true story” doesn't mean much. It certainly isn't an excuse to get lazy. Consider only the disparity between the title of this film and the hope for Kenny. DNA evidence arrived after Betty Anne started school, and — although the movie ignores this point — she didn't need a law degree to call the New York advocacy group.

The film goes on insisting that there's a connection, to the point when there must be tense scenes of Betty Anne taking and passing the bar exam. Afterward, she can't go anywhere without pointing out that she's a lawyer. Obviously this is a movie made by people who think their audience is awed by attorneys. You half expect a scene in which Betty Anne is told there's an hour wait at the local T.G.I. Friday's so she can exclaim, “I'm an attorney!” and get her table. The actors all make fine arguments in favor of this movie, but the evidence against it is overwhelming. (R) 107 min.