A new exhibit at Virginia Museum of History and Culture combines history, murals and local artists. 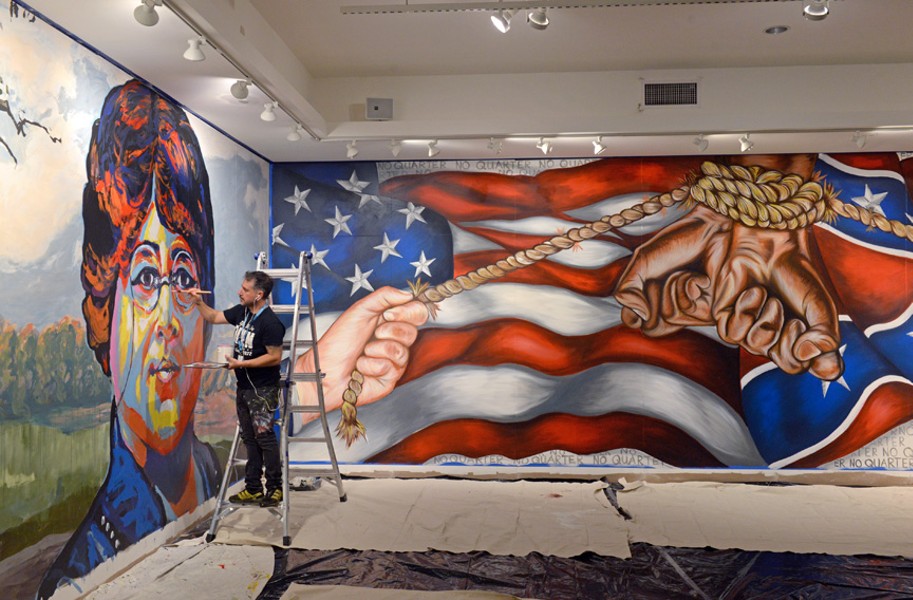 Scott Elmquist Artist Noah Scalin paints a mural of Janie Porter Barrett, a social reformer who established a rehabilitation school for African-Americans in Hanover County. Behind him is a symbolic mural from Hamilton Glass commenting on the struggles faced by African-Americans today.

Over the past six years, Richmond has become a city of murals. But what Richmond needed, the Virginia Museum of History and Culture concludes, was a fresh coat of paint.

For decades, the museum has been home to one of the most well-known murals in Richmond, Charles Hoffbauer's Memorial Military Murals. But when artist Hamilton Glass looked at the series of four panels, all he could see was that only one black person was represented and he was in the background.

"Fresh Paint: Murals Inspired by the Story of Virginia" provides Glass and nine other artists including Mickael Broth, Christina Wing Chow, Amelia Blair Langford, Austin Miles and Noah Scalin the chance to re-imagine Virginia's history for the 21st century on the walls of the Virginia Sargeant Reynolds Gallery. Using the museum's "Story of Virginia" exhibit as inspiration, ten artists were asked to choose an object from the exhibition and use it as a starting point to create a mural.

"Their choices were indicative of what's on people's minds these days," says curator Andy Talkov of murals inspired by issues of race, gender and the environment. "Things that might not have been on people's minds a generation ago, but this is what the community is interested in now."

The painting schedule for the artists was staggered from the second week of September through early October so visitors could see artists at work every day. Once their murals are finished, the objects will be installed in front of each mural.

For Roanoke artist Toobz Muir, it was the smallest object in the collection that inspired him: a 1 1/2-inch brass seal for the Roanoke Navigation Co., founded in 1812 to improve the shipping system along the Roanoke River Valley. It was a Conestoga wagon and ceramics that captured the attention of Chris Milk Hulburt, who concocted a semi-autobiographical story about a fictional pioneer-turned-artisan potter in a Davy Crockett-style coonskin cap.

"It created a cross section of Virginia's history by letting the artists choose," explains artist and co-curator Nico Cathcart. She drew her inspiration from the role of women as agents of change in Virginia, people such as her friend Casey shown in a pink women's rights hat, Richmond suffragette Adele Clark and Elizabeth Keckley, an abolitionist from Dinwiddie who bought her freedom and went on to become seamstress and confidante of Mary Todd Lincoln.

Around the women are images of the Pride flag, a suffragette banner and the first flag to fly over Richmond once the war ended, surrounded by a profusion of flowers inspired by ceramics in the collection. "I like the metaphor of fine china to the traditional role of women in the home," she says, standing in front of two weeks' worth of painting. "They were not fading violets, these women were real people."

A copper still spoke to Ed Trask and got him thinking about Virginia's long history with alcohol, dating back to George Washington making rye at Mount Vernon. "I had a lot of questions about why people still make moonshine and it goes back to family traditions," he says, taking a break from painting. "I think it speaks to a sense of regionalism and we have pockets of that today with craft beer and artisan distilleries all over the state. It's the same as it used to be."

And Glass, the artist who took issue with the lack of diversity in Hoffbauer's century-old murals, depicts a pair of bound black hands against a background of both the American and Confederate flags as a way of showing that blacks, even those who'd fought, couldn't be free or live without discrimination no matter the outcome of the Civil War.

"We're a capitol of mural art," Cathcart says. "This exhibit blends history into a contemporary setting." The beauty of "Fresh Paint" is that the murals will eventually be seen beyond the walls of the museum.

"We're working on plans to find permanent homes for all of the murals," Talkov says. Because they're painted on panels that can be de-installed in pieces, they can be re-installed elsewhere in Virginia. "We want them to have a life beyond this exhibition." S

"Fresh Paint: Murals Inspired by the Story of Virginia," mural painting ongoing through Oct. 12. The exhibit opens Oct. 27 and runs through April 14 at the Virginia Museum of History and Culture, 428 N. Boulevard. Virginiahistory.org.