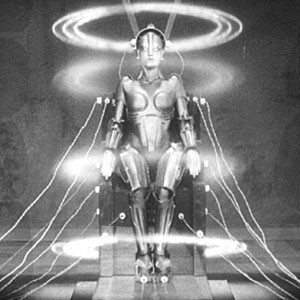 Fritz Lang's “Metropolis” was conceived, the director told Peter Bogdanovich in 1965, on a boat docked off New York in 1924 from which Lang “looked into the streets — the glaring lights and the tall buildings.” Lang's incomparable imagination conjured a city bright and glittering from above, but more mechanical, steaming and pressed with trodden humanity the further his mind pushed. It is an archetype and a series of symbols: rich rulers luxuriating in dreamlike splendor; workers toiling beneath in a nightmare of bizarre exertions that only serve to keep the city machine going.

The news that the film had been restored and released this year in its entirety for the first time since its 1927 Berlin premiere was almost impossible to miss. Now that this version has been released on DVD and Blu-ray (Kino International), complete with all the extras those formats afford, the temptation to get lost in the length and breadth of Lang's marathon of ideas is more alluring and treacherous than ever.

Critics and audiences have differed on the film since its release. Some hail it as a masterpiece of German expressionism while others focus on the sharp delineation between its visuals and comparably simplistic vision, co-authored by Lang's former wife Thea von Harbou. Hitler loved the idea of a supreme leader mediating between the classes, especially in the form of the youthful Freder (Gustav Froehlich), who helps a messianic instigator of the subterranean workers (Brigitte Helm) overcome a treacherous magician and inventor (Rudolf Klein-Rogge) bent on inflicting revenge with an invincible robot modeled on his lost love. Lang himself called the movie “silly and stupid.”

The director's judgment notwithstanding, “Metropolis” is stuffed with enough material for several films. It's no wonder this marvelous original imprinted itself on nearly every sci-fi, mad-scientist, future dystopia that followed. The restored footage, about 33 minutes, clears up gaps in the action, but, unbelievably, even these chunks of scratchy 16mm might not have been the end had Lang been able to keep going. He contemplated a scene of ghosts and ghouls coming out of a Gothic church as the metropolis burned, and for some of the protagonists to exit at the conclusion on a rocket to outer space. It's a shock to emerge from the fully restored “Metropolis” and realize it's only as long as the latest “Harry Potter.” You could spend years in there.