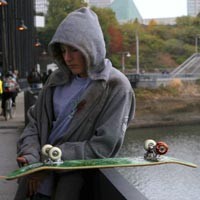 "Goodwill Hunting" director Gus Van Sant's latest film, "Milk," about the openly gay San Francisco supervisor Harvey Milk, is scheduled to be released at the end of the month. The film, which stars Sean Penn in the title role, has been timed to maximize its Oscar potential and will capitalize on the interest in this year's election. (California, for one, voted on a proposition to ban gay marriage.) But Van Sant's films are not always interested in such big stars and broad appeal. As his previous outing, "Paranoid Park," released on DVD in October, reveals, the director also has an interest in unconventional modes of storytelling and unknown actors.

Paranoid Park is the nickname of a real skate park in Van Sant's hometown of Portland, Ore. From the movie's point of view the title could also refer to a state of mind, perhaps that of Alex (Gabe Nevins), a seemingly normal high school kid trying to work up the courage to test his skateboard prowess in the park and deal with the emotional demands of his girlfriend Jennifer (Taylor Momsen). Though the story may seem simple, it is not the usual plot-driven tale of teenagers.

Scenes in the film alternate between passages of dialogue and action, and the unexpected, unusually filmed passages of song and image that seem to spring from Alex's daydreams. Maybe it's a blur of skateboarders rotating in an underground pipe in slow motion to the ghostly drone of Elliot Smith (and not thrash metal, as one might expect), or Alex turning down a high school hallway in a state of reverie to the happy beat of a '70s solid-gold track, even though he's on his way to answer questions about a recent murder investigation in which he's been implicated.

What's beautiful about the film is its refusal to try to show us ourselves in the characters, but rather to force us to gaze at the incomprehensible within them. Based on the novel by Blake Nelson, "Paranoid Park" does have something resembling a murder mystery in it, though it seems intended as abrupt disturbances in the soft flow of the images rather than the film's driving force.

Going against the Hollywood grain in many ways, Van Sant mainly chose first-time actors for the project, and even allowed them to improvise dialogue. An often hallucinatory exploration of the thoughts and impulses of the young, the movie is the farthest thing from the typical MTV fare aimed at its protagonists. Yet nothing in that mode comes this close to capturing their unpredictable, kaleidoscopic selves. (R)