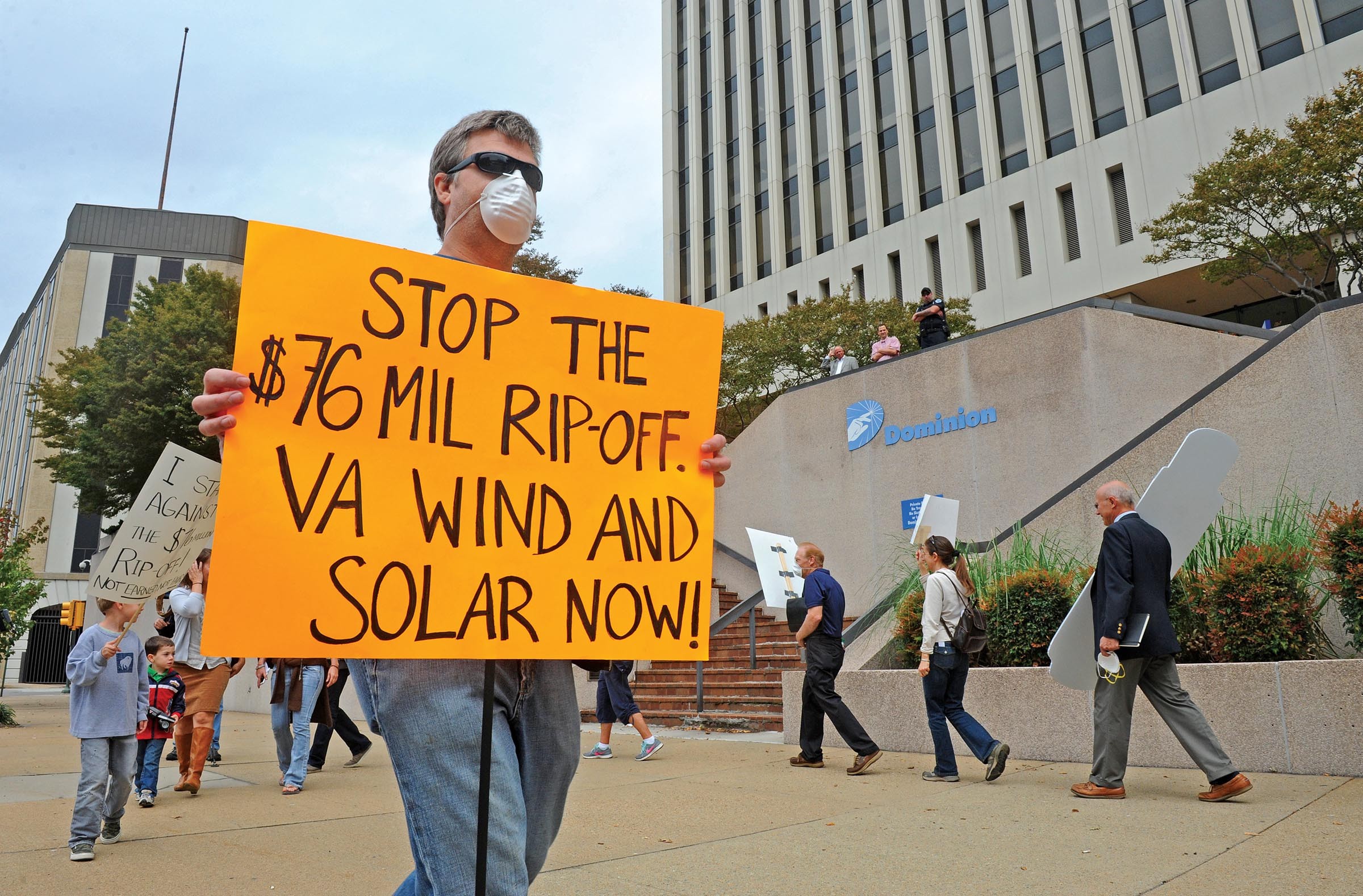 The goal is to encourage state utility companies to invest in renewable energy.

The incentive is state approval of a rate hike on Dominion Power customers that could bring the company an additional $76 million in profit.

The reality is a fat bonus for the utility accompanied by no real change in how power is produced in Virginia, at least according to a group of environmental activists who are spending the week picketing outside a Dominion office downtown.

Five environmental groups, including the Sierra Club and the Chesapeake Climate Action Network, say Dominion is ripping off customers by cashing in on a 2007 state incentive program without building new renewable energy production facilities here.

“Lawmakers envisioned solar fields and wind farms popping up all over the state, and what we have is a system where Dominion and other utilities have to do little more than paperwork to get the bonus,” says Beth Kemler, state director of Chesapeake Climate Action Network, at Monday’s kickoff rally. “This program was set up to create new renewable facilities and instead it’s just rewarding them for conducting business as usual.”

By meeting renewable energy goals — 4 percent of all power delivered to customers — Dominion could be allowed to raise customers’ rates by a half-percent. The increase is meant to cover the higher cost of green energy sources, and in Dominion’s case it’s worth $76 million.

The utility is eligible for the program in part because it has five renewable energy facilities operating in the state — four hydroelectric stations and a wood-fired power plant. But the facilities aren’t new. The oldest dates to the 1930s, and the newest, the wood plant, came online in 1994. Dominion also is relying on renewable energy credits purchased from out-of-state utility companies to meet the program’s threshold.

Activists say Dominion’s accounting skirts the original goal of the program and instead is just an excuse to bring in more profit on the backs of rate payers.

Dominion spokesman David B. Botkins says the activists are protesting a rate hike that’s still theoretical. Dominion’s base rates in the state are frozen until 2013 and it’s ultimately up to state regulators whether to grant the utility the full $76 million bonus.

Dominion is committed to renewable energy and has plans to generate 15 percent of its power from green sources by 2025, Botkins says. The company is converting three coal-fired power stations to plants fueled by waste wood, which will double Dominion’s bio-mass output. It’s also investigating options for solar and wind generation in the state — methods the activists say are cleaner. But there are challenges, Botkins says: For one, the projects don’t always make economic sense.

Meanwhile, a group of doctors backing the protesters says that until lawmakers institute incentive programs that work, Virginians will be left to choke on pollution from coal-fired plants, which they link to chronic diseases such as asthma in children.