Wes Freed created the Drive- By Truckers' look — now he's along for the ride. 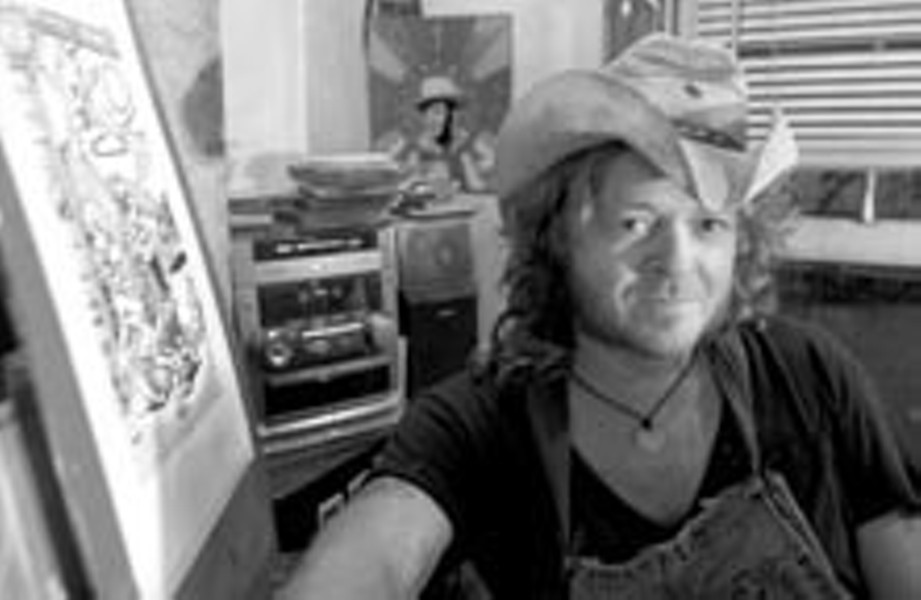 It started about 10 years ago when Freed was touring with his now-defunct group Dirtball, a critically acclaimed band that Allmusic.com called "alt-country at its finest." Freed says when he and his wife saw the young Truckers at a festival in Georgia, "we thought, my God, these guys are somethin' else." They asked the Truckers to play the Capital City Barn Dance, a monthly series of alt-country shows they put on at various venues in the '90s.

The Truckers were agreeable and stayed with the Freeds when they came to Richmond. At the house the band caught a glimpse of Wes' art and decided its drunken skeletons, full moons and moonshine revelry meshed well with the renegade hillbilly image the Athens, Ga.-based band was cultivating. Lead singer Patterson Hood calls it "love at first sight." "I knew we were artistic soul mates," he writes via e-mail upon return from a brief European tour. At the time the Truckers had two self-released albums out and were working on an ambitious two-disc project, "Southern Rock Opera," which took them six years to complete. They asked Freed to create the album art for the series of punk-inspired roots-rock songs loosely based on the story of Lynyrd Skynyrd as well as Hood's own experience coming to grips with the contradictions of his Southern heritage.

The album was widely praised after its release in 2001. It earned four stars from longtime Rolling Stone critic David Fricke. The Truckers' clever narrative songs, powerful-Southern-rock-meets-vulnerable-Neil-Young sound and rowdy shows drew crowds and soon elevated them from struggling touring band to regular sellout. Thanks in part to packed houses and their friendship with Freed, the DBT play Richmond venues and festivals several times a year.

That one album cover has led to two more: 2003's "Decoration Day" and 2004's "The Dirty South." And today, Freed's moonlit paintings have become synonymous with the band, whose success shows no sign of slowing. His work has appeared on posters and T-shirts and takes up three- quarters of your computer screen when you visit www.drivebytruckers.com. For the album the band will release this summer, Freed casually says, "I'm doing something for it." He also hints at a larger project in which the band's image and Freed's art may be involved with a promotion, but he declines to get too detailed as the deal has not been sealed. On Freed's continued work for the band, Hood writes, "As far as I'm concerned, he will do DBT covers as long as there's a DBT."

Since the band and Freed are friends, each commission is a casual affair. The band asks him to do something, and he asks for a price. Freed says they always end up paying him more than he asks for — and that's not where the compensation ends. "Hell, I'd do it for free because they're going all around the world advertising my work," he says. As a result of his association with the DBT, Freed has been contacted through his Web site by fans wanting to buy his work. To date, he has sold about 40 pieces to fans in Australia, Norway, the Netherlands, Ireland, England and other countries.

Now he's working on a commission for a California fan of the Grateful Dead's Jerry Garcia and Pigpen. Incidentally, the fan also bought one of every print and poster on the site. Freed charges about $500 for a 24-by-24-inch special-order painting on plywood. Each piece takes him about two to three weeks to complete, depending on the complexity. Since Freed often renders real people for these commissions, he takes his research seriously and once was held up for days trying to figure out what Skynyrd frontman Ronnie Van Zant had tattooed on his arm. "A lot of it's pure fantasy, but when there are facts involved, I like to get the facts right," Freed says.

He estimates that 98 percent of hits on his Web site are Truckers-related. Freed's wife takes care of all e-mailing and business. "She's the brains of the operation," he says. "I just make pictures of what people tell me to make pictures of." Freed, who earned his degree in painting and printmaking from Virginia Commonwealth University in the '80s, has had a few solo shows of his work but says when he shows these days it's just for fun. When he's not creating for the band or its fans, Freed makes prints of his watercolors, which he sells for $50.

Freed calls his relationship with the band ongoing. "Obviously I want to do whatever I can, but if it's best for the band." While Freed says he is far from rich, he is able to make a living from his art with the help of the money he earns acting in Chesterfield Auto Parts commercials. For now, he's happy with his arrangement, although he could use a new roof, he says, and health insurance would be nice. But if all keeps going as it has for the Truckers, Freed may not have to worry about those things.

"I don't think I have so much of a self-esteem problem that I don't think I could have made it without them," says Freed, who hopes his art contributed to people actually buying Truckers albums rather than downloading them. "But I like to think we've come a long way together." S

The Drive-By Truckers play the Haymaker Music Festival May 21 in Spotsylvania. For more information, go to www.haymaker.net.