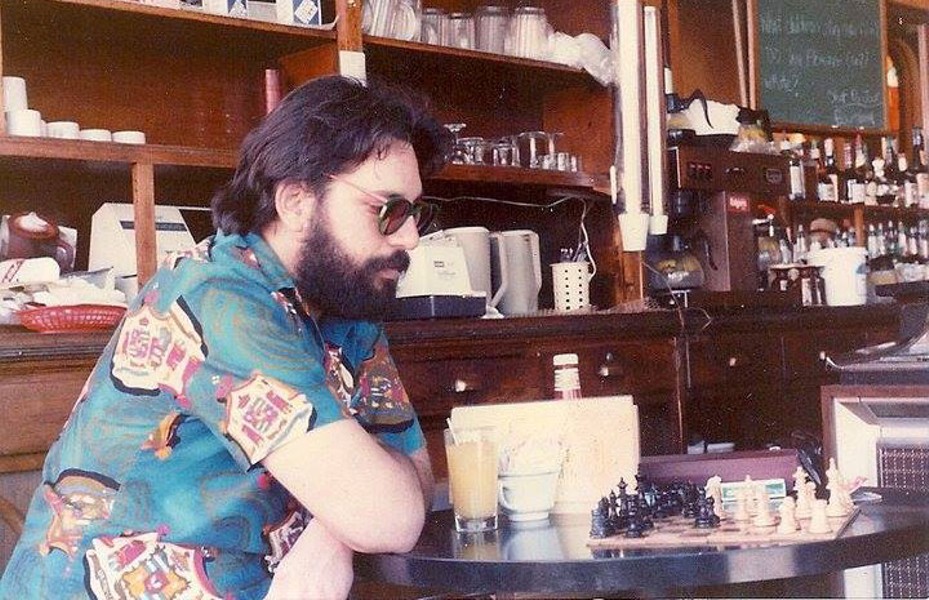 Back in the 1980s, when spring break ended, I drove 12 hours nonstop back to Richmond from Florida and, without stopping by my apartment, went straight to Hard Times, a club located at the corner of Harrison and Cary streets where Elephant Thai Restaurant is now. The Good Guys were probably playing, but it could just as easily been the Bopcats or maybe the Dads. Bob Hardtimes -- his real name was Robert Berenson -- the club's manager and talent booker, was working the door, and when he looked at my I.D., he said, "I can't let you in — this isn't you. You look a lot older." And he laughed. I wanted to smack him.

I didn't usually want to smack Bob. He was one of my favorite people, and after Hard Times closed (a car ran into the front of it, and the owners decided not to reopen), I saw him almost every day while I was waiting tables at the Village Café. He and his posse of chess players would stay for hours, cracking jokes, drinking coffee and then switching to beer and shots at happy hour.

Bob died unexpectedly this week and the cause is still a mystery. He was 61 years old — older than most of the people he knew here in Richmond. His age may have had a little bit to do with it, but Bob's distinct look — long black hair and a long beard when the style was clean-shaven and punk-rock short hair, Hawaiian shirts and shades — and his constant stream of (usually terrible) jokes made him iconic.

In the 1980s, Hard Times was a destination for most of the bands touring in ancient vans up and down the East Coast. Bands like 10,000 Maniacs were regulars, and it was the home of probably the most popular band in Richmond at the time, the Good Guys.

The Good Guys played hard-driving ska/funk and became a nexus for local music fans. The punk rockers came, the new wave pop fans came and even the frat boys would venture in, because the band's music was just so irresistible. They were also Bob's best friends and later he became their road manager.

He also did a little stand-up — and don't even start with me about whether or not Bob was a good stand-up comedian. It was his sheer, "Gong Show" awfulness that made him great. Lots of people loved his jokes. I heard them every day for several years. I'm the wrong person to ask.

In addition, Bob managed a few reggae bands, post-Hard Times, including Eek-a-Mouse, but after that, he pretty much dropped off the radar. Facebook brought him back to most of us (where his latest pseudonym was Bob Zen), and we discovered he was living in Robinsonville, Miss., working as a professional card dealer. "He travelled all over the country working in casinos and on riverboats," artist Andras Bality says.

Bob was notoriously tight-lipped, so his past is difficult to uncover. He was from Cherry Hill, N.J. "Bob used to have a really great picture of himself smiling in his prison-guard uniform in the 1970s," friend Matt Elmore says. How he transitioned from a prison guard to a Richmond nightclub manager, booker and band manager is unclear.

I mentioned that he was iconic — and I mean that literally. His look, for that 80s generation, is instantly recognizable, in the way that the face of Marilyn Monroe or Elvis is. Bob was known only as Bob Hardtimes long after the club closed. As an icon, the real Bob, like his name, is fused with that particular time and that particular music, evoking memories of the heat, the sound and the young love that dancing can spark. Plus, really bad jokes. 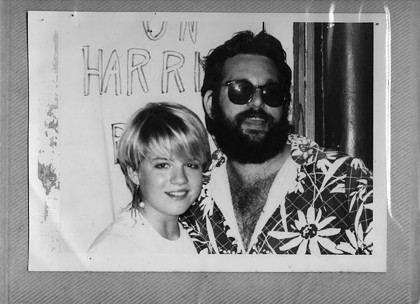 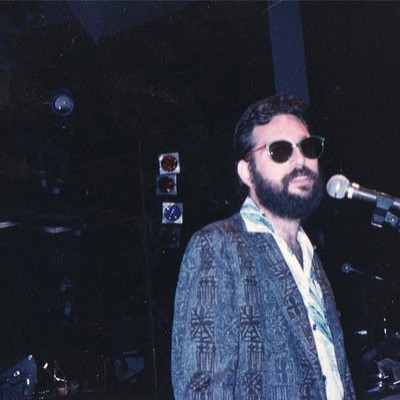 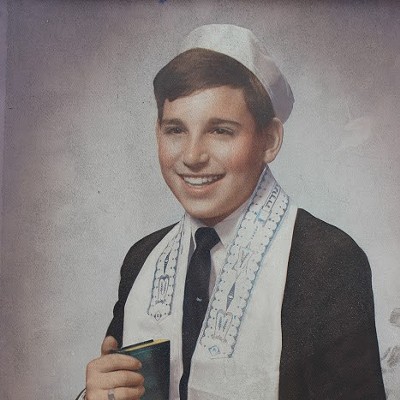 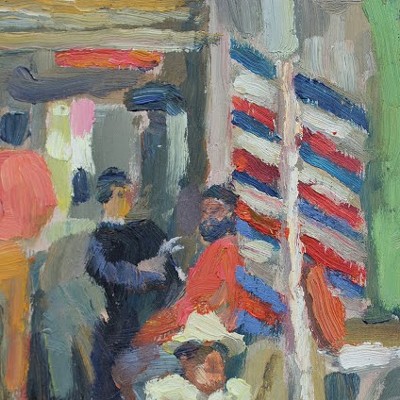 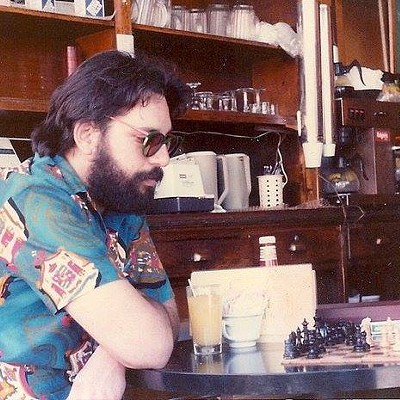 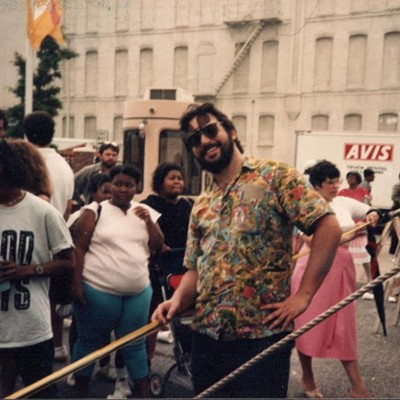 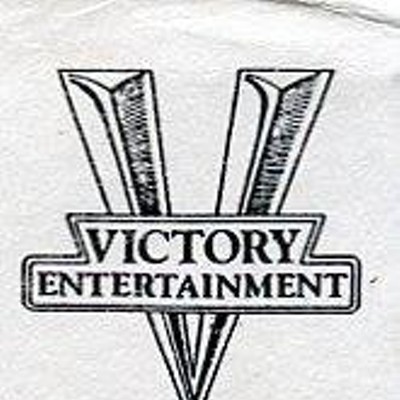 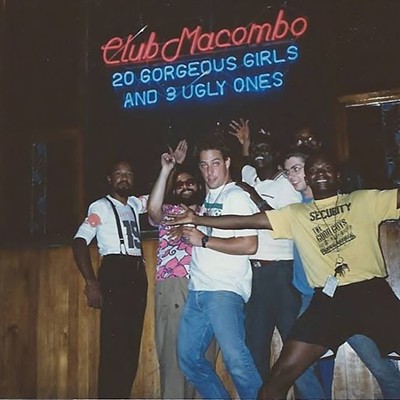 Here are a few remembrances from the friends who knew him the best during that time.

Kahil Jahi: Bob Hardtimes. You either liked him a whole lot or you loved him. Trusted, respected and revered. So many moments, so many laughs.

Brandon Ellis: Bob Hardtimes gave me my first start in bartending. …Working at Hard Times was a dream job that Bob "made" for me. …I got my kitchen legs, my bar legs and learned about booking bands, working a sound board and setting up a P.A. and equipment. These were all things I would never have had an opportunity to do without his help. Growing up without any male role model, Bob, like it or not, got that role. Bob was honest and direct. You never wondered where he stood on things 'cause he would tell you all night long. He was funny and had an awesome way of showing you how you were fucking up without saying, "You are fucking up." He was a mentor to me whose sense of humor nurtured my sense of humor and outlook on the world.

Buffy Harwood: When I was 14, there was a band I wanted to see playing at Hard Times. My mom knew someone who was able to arrange to get me permission to attend the show despite my age. That was the night I met Bob. After that first show, he always let me (and a lot of other kids) into the shows where he was working the door. He just asked that we not attempt to drink at the clubs — I never did, but I was a bit of a rule follower. …He was a good friend and even took my brother and I to Kings Dominion - believe it or not — he paid for everything! I know it sounds creepy because I was a teenager and he was a grown man, but he never did anything that was inappropriate — although much of what came out of his mouth was inappropriate.

Jo Best: Very few people were so influential to me in my life. This is a huge loss. He was a gamblin', ramblin', pontificating, awesome person. Not a saint nor claimed to be ... just awesome.

Jimmy Saal: Bob was our Zelig. He has so many friends who knew him from different angles, many not knowing the other. However, no matter the different folks he was hanging with or the various faces he wore (club producer, band driver/emcee/tour manager, store manager, chess slacker, Chinese-food delivery man, poker dealer or globe-trotting ladies man), it didn't matter because he was always the same person. I guarantee if all his friends gathered in the same room and started telling Bob jokes, he would be clearly recognizable to all. So smart and sharp-witted, he would stand his ground with friends and foes about politics, religion, music, football. Whatever, it didn't matter. It would still be impossible to dislike him. He'd almost always find the right punch line to get a laugh while also chilling everyone out.

Kirsten Gray: He kicked my ass in chess. I sat there thinking and thinking, he read the paper, took shots, made moves without looking. He was also so kind to me. He knew I was a beginner.‬

Brandon Ellis: Bob wouldn't play chess with me. He said it takes longer to set up the board than it takes to beat me‬.

Harry Gore: Bob was truly a riot. And I still marvel at his ability to drive the entire Good Guys entourage in a van during the two (?) month Simply Red tour in '86. Gonna miss him for sure. He was a major contributor to the Richmond music scene.

Brandon Ellis: I remember one day Bob was giving me a hard time because I was not very ambitious. He kept telling me, "Brandon, you could be somebody." Until I finally said, "I coulda been a bartender, instead of a bum, which is what I am." He thought that comeback was genius.

Matt Elmore: Bob was a compulsive hoarder. His room looked like a haphazardly assembled storage unit. Nobody knew this except two ex-girlfriends or those who had lived with him at some point. One day, I knocked on his bedroom door to ask about the electric bill that needed to be paid. He stepped over piles of 30-year-old Mad magazines and racing forms, and looked around. "Let me see. What did I file that under? Oh, yeah! Friday's lunch." He picked up a greasy Styrofoam container and pulled the bill out from under it, then held it up, smiling in victory.

Beth Zulik Socol: You could safely say that Bob spent a few years at Guilford College in Greensboro, N.C. He may have been enrolled for a time, but it is safe to say that he did not attend classes!

Scott M.X. Turner: Bob never knew the lesson he taught me, which is this: Bob was maybe the only middle-aged Jew in Virginia (maybe the world) who made delivery runs for a Chinese restaurant. And the zillion other things he did to pay the bills. Occasionally someone would say, "Man, Bob's so great, so funny, so sharp. Where's the ambition?" And it only dawned on me many years later what Bob knew all along — you don't need ambition or society's rigid, career fast-track bullshit.

Ira Marlowe: Bob joke: "You think there are no Jewish rednecks? Who do you think invented those wallets with the little chains on them?"

Andras Bality: Bob loved to travel, anywhere. I have many fond memories of our trips to Mexico. One trip, we left Richmond one evening and arrived at the border at Brownsville, Texas, 30 hours later. I never drove, Bob never slept. We only stopped for food and gas. Wherever we went, he would find someone to play chess with, some teens in Jalapa, Mexico, or a homeless guy in a chicken place in D.C. The stories and jokes never stopped. Once driving through the Yucatan Peninsula, the roads were so rough, the rear axle broke off of my 1978 VW Rabbit. We were on the side of the road in what seemed like the desert. We had another friend, Andrew, with us and luckily no luggage as everything was stolen in Mexico City. All we had was Bob's video camera and his big leather coat. He had read in our travel book that we were in the middle of bandito country, so Bob was pretty scared they were going to attack us and take his camera.

Brandon Ellis: Bob would always say "good at video games, bad at life" and then at 3 a.m. we would drive out to the airport so he could play video games.

Dave Murray: Took me some time while learning to play chess that the songs and verses Bob would sing randomly were not at all random, but were basically a series of tells as to what he was going to do or what was about to happen on the board.

Jimmy Saal: Bob had this odd gambling habit that if he took you to the airport, he'd ask you to let him take out a flight insurance policy on you, naming him as the beneficiary (it can't be legal now, I'm sure). He used to say it would guarantee your safe trip because he never won the bet.

Brad Tucker: When Bob Zen gets to Rock & Roll Heaven, he'll probably end up working the door: "Four dollars. … in or out. … Who loves ya, baby?"

CORRECTION: The story originally stated that Bob Hardtimes was the Good Guys' manager. He was their road manager. Jimmy Saal was their manager.It also said that Bob was 64 years old. He was 61.