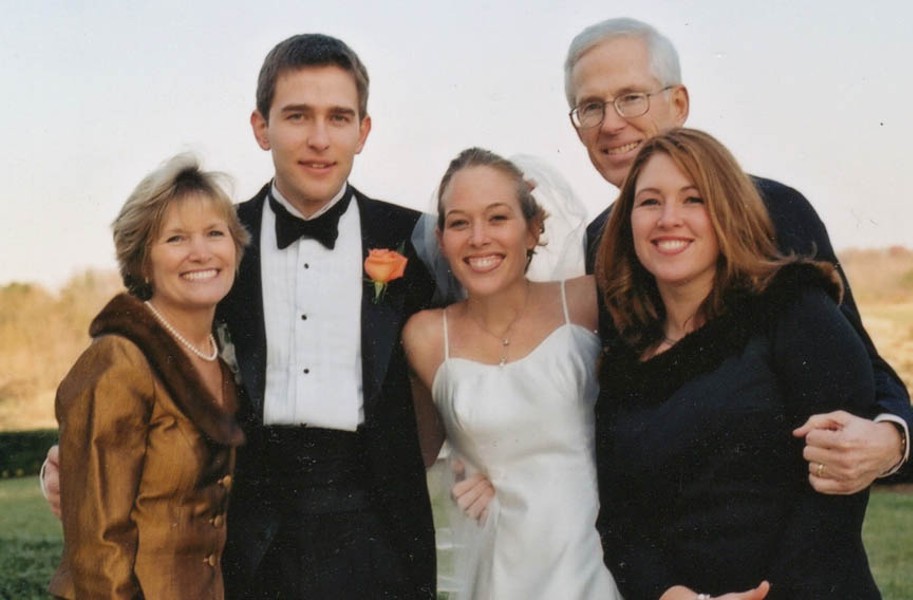 April Garnett The late Richard Sharp, in glasses, at the wedding of daughter April Garnett in 2000. From left: his wife, Sherry Sharp, with Scott Garnett, April Garnett and Donna Sharp Suro.

One of Richmond's most creative business entrepreneurs was remembered last week as an exuberant man unafraid to take business calls on his cell phone while lurking in a closet to play hide-and-seek with his grandchildren.

One of Richard Sharp's daughters, April Gannett, said her father would play almost any game — "except, of course, the things that I consistently won." She and other family members spoke at a warmhearted service July 15, held at Hope Church in Goochland County and attended by about 500 people.

Sharp died June 24 at age 67. The longtime Goochland resident parlayed a knack for computers and fresh marketing concepts to help grow two of the Richmond area's most significant companies: CarMax and Circuit City.

A bit of a geek as a teenager, Sharp focused his keen intellect on electrical engineering at the University of Virginia and computer science at the College of William and Mary. His timing was perfect — both fields were taking off when he graduated.

Sharp joined Circuit City in 1982, bringing with him discipline and conformity. He became chairman of the retailer in 1986. As stores grew from a few dozen to hundreds, sales soared from $175 million in 1986 eventually to $12 billion.

His was praised by author Jim Collins in his bestseller "Good to Great." Collins noted that from 1982 to 1999, Circuit City's cumulative stock returns beat the market average by 22 times, besting Coca-Cola and Wal-Mart.

Ever-restless, Sharp kept looking for challenges — like shaking up the used-car industry. His idea was to use computers to locate the car a customer wanted, then fix it and sell it at a haggle-free price. Sharp moved over to run the company.

It was a big hit, but CarMax hurt Circuit City by drawing away some of electronics chain's talented executives.

Sharp never forgot philanthropy. His Sharp Foundation helped fund many urban and academic charities such as the Boys and Girls Club. An ardent Republican, Sharp once played host to President George W. Bush for a private fundraiser at his Goochland home.

After retiring in 2007, Sharp learned that he'd contracted a rare and fast-acting type of Alzheimer's disease. Daughters April and Donna Suro set up the Stay Sharp Fund to Cure Alzheimer's to boost research and arranged for $5 million in family funding.

At the memorial service, Sherry Croyle Sharp, his wife of more than 45 years, read aloud a letter written to him years before, intending that it be opened when she died. "I had totally forgotten all about it," she told Style.

She wrote it June 24, 1990, the same date and month of his death 24 years later. It included a verse from Isaiah 45, whose passage, "I will give you hidden treasures, riches, stored in secret places," might be construed as a reference to Alzheimer's, she says.

"In our family, we are believers," Donna says. "We don't believe in coincidences."