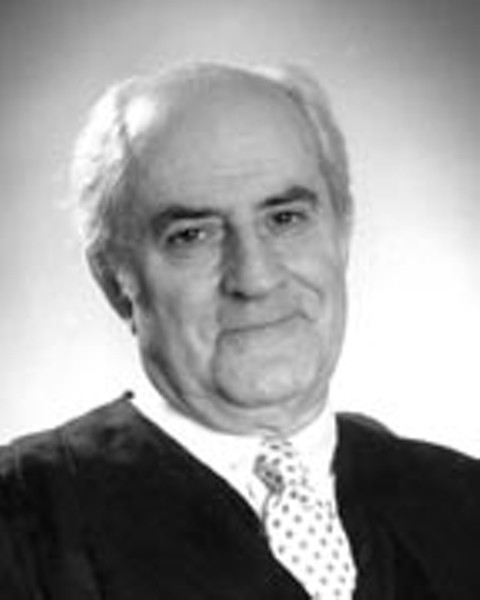 Watching Judge Merhige at work in the courtroom was amazing. He loved the law. He claimed he hadn't worked a day in his life since he entered law school — the law was his passion, not work. Yet, even more, he loved people, all people. In the courtroom he showed this through the respect with which he treated everyone — lawyers, parties, jurors, even the various characters who occasionally appeared before him.

In one memorable case, he presided over a lawsuit for money damages that arose out of a shootout in Greensboro, N.C. Several participants in a communist-affiliated protest had been killed by a group of local Klansmen and Nazis. The Klansmen defendants could not afford lawyers and were obviously bewildered by the legal procedures. Judge Merhige spoke to them patiently, answering their questions, one time even bringing one who had difficulty hearing forward to sit near the judge, much to the dismay of the U.S. Marshals providing security at the tense hearing. This from a judge most known for his courageous decisions fostering racial integration. An ancient legal principle holds that the law is "no respecter of persons," meaning that titled personages get no special treatment in our courts. Judge Merhige took this to the utmost, treating all with full dignity and courtesy, even an allegedly murderous Klansman.

Judge Merhige's law clerks became a part of his family. He treasured his office wall of photographs of his 50-plus clerks spanning his 31 years as a judge. He worried and fussed over each of us as if we were his own children, staying in touch even as we married, had children and spread throughout the country. We have collectively checked up on him and prayed for him through his health struggles in recent years.

Judge Merhige leaves a great legacy in the wisdom of the many important decisions he made. But I like to think he left a further legacy through the law clerks and countless young lawyers whom he influenced through his teaching and mentoring. I, for one, as I sit daily resolving juvenile and domestic relations disputes in my court, aspire humbly to follow his model of patience and love for justice and all God's humanity. —Richmond Juvenile and Domestic Relations Court Judge Anne B. Holton

Born in Brooklyn, N.Y., Robert R. Merhige Jr. left a mark on Richmond that was more than indelible. Indeed it could not be contained, inevitably seeping deep into the greater realm of law and its applications.

Serving for more than three decades on the bench of U.S. District Court in Richmond, he had an illustrious career of landmark decisions, praise and criticism.

Merhige never shrank from his interpretation of law as absolute and reliable. Nor did he revel in the court of popular opinion. Invariably, his rulings divided the city's conservative and liberal contingents. He ruled for desegregation and consolidation of Richmond schools, due process for inmates, maternity-leave benefits for pregnant women and the release of White House tapes related to Watergate. He heard cases of Indians charged with crimes at Wounded Knee and oversaw cases involving Westinghouse Electric Corp. and the bankruptcy reorganization of A.H. Robins following the Dalkon Shield infamy.

He had plenty of enemies and steadfast friends, but Merhige was a private man of public stature whose definition of justice remains relevant still. — Brandon Walters