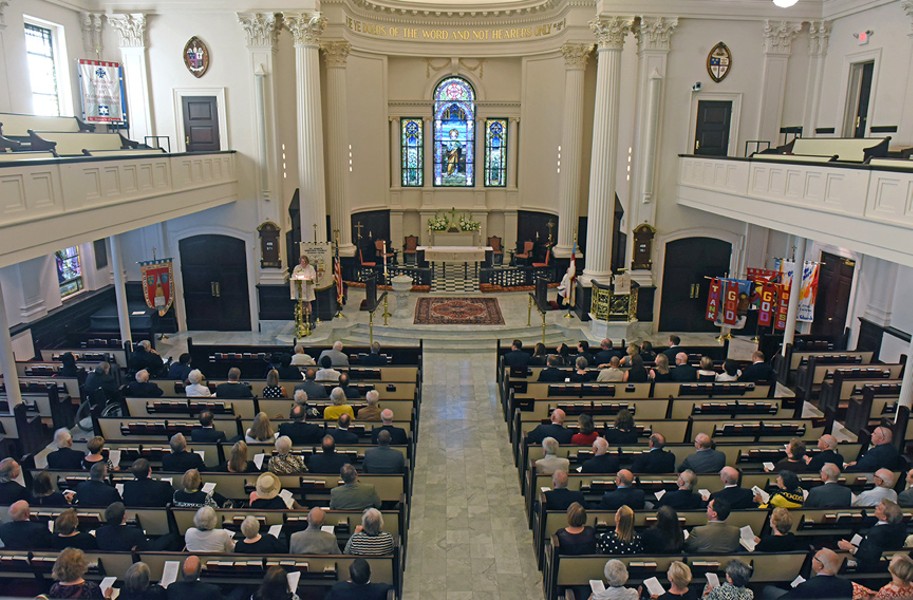 Scott Elmquist Anne Ashworth eulogizes her late father, Ray Ashworth, from the podium of St. James's Episcopal Church on May 24.

Ray Ashworth, an essential and ebullient presence on Virginia’s political, cultural and social scene for more than half a century died May 9 at his home near Bryan Park. He was 82.

It surprised few folks who delighted in him that he succumbed while dressing to attend a gathering of the Jamestown-Yorktown Foundation, of which he was chairman emeritus. Indeed, Anne Munford Ashworth, who died in 1991, once quipped that her husband’s epitaph should read: “I’m on my way to a meeting.”

Ashworth was born in Danville and educated at the University of Richmond. He soon married into a prominent family in small-town Wakefield, population 950. Upon the death of his father-in-law Ashworth oversaw his in-laws’ business interests. Wakefield and Surry County also became his launching pad into politics. He was elected as a Democrat to the House of Delegates, unseating an incumbent from the Byrd Machine. Jurisdictions in his district, including Wakefield, were all or parts of Charles City, Dinwiddie, Greensville, New Kent, Surry and Sussex counties and the City of Emporia. He served in the General Assembly until 1982.

He also served for a time as head of the Virginia Crime Commission, an assignment that took him to every penal institution in the Commonwealth. “Believe me,” he once told a dear friend from Wakefield, John Nicholson, “You do not want to be incarcerated in Suffolk.”

Following elected public service he served until 1991 as a lobbyist for the Virginia Trucking Association.

To witness Ashworth work a room, whether the occasion be social or political, large or small, was a performance to behold. Upon arriving, he’d quickly scan the gathering and slowly pad across the floor, lawn or parking lot. To navigate Virginia-- either socially or politically-- requires considerable tailgating skills whether at horse races or campaign rallies. Ashworth never had an apparent agenda or was in any hurry to see this person or move on to the next.

Wherever he was, he was in the moment. But make no mistake, he got to everyone, lifelong friend or stranger. “Now who are you?” he’d ask, his warm gaze piercing through his eyeglasses. Chances were, he knew the parents, grandparents or had visited their hometown or native country of to whomever he was chatting.

Ashworth loved travel and spent a brief period in the former Soviet Union working in food relief. But England was his great love.

Some 300 attended his memorial service yesterday at St. James’s Episcopal Church, on West Franklin Street in the Fan District where he lived for many years. In contrast to current fierce political partisanship, many remembered him as being free from that.

“He was a consummate gentleman,” says Richmond lawyer Walter Emroch, who served with Ashworth in the House of Delegates. “He was one of the good guys,” says historian and a former neighbor Margaret “Susie” Peters, who was active in historic preservation statewide during his tenure.

“He was a good and careful listener and then he’d respond with wit,” said former Lt. Gov. John Hager.

One of Ashworth’s three children delivered a eulogy from the lectern. Anne recalled how her father was chatting with British Prince Philip at an official function when his majesty complimented Ashworth’s trench coat: “Is it Burberry?”

“No,” replied Ashworth, “It’s London Fog,” adding that it was reasonably priced.

The 300 congregants in the sun-deckled sanctuary all laughed. This was the man they knew-- down to earth and practical, hospitable in deed and spirit, and fully engaged in every moment.