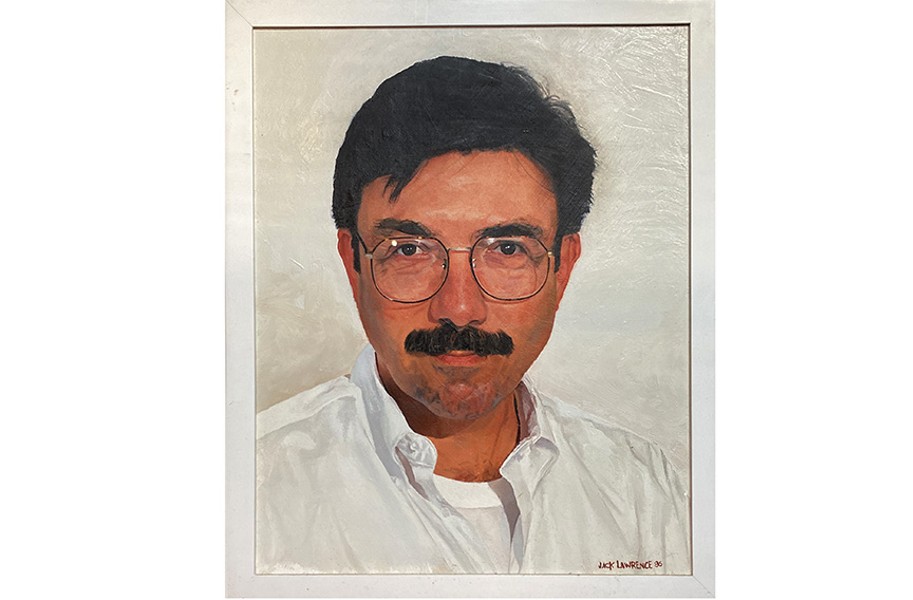 Veteran Richmond artist Louis Briel, a bon vivant on the cultural and social scene here before suffering a stroke almost a decade ago, died Jan. 20. He was 75.

For those who knew Briel and his work, and those who didn’t, his outgoing persona and self-confidence, if not chutzpah, are currently being channeled through 70 pieces in "The Many Faces of Louis Briel," an exhibition at the Crossroads Art Center on Staples Mill Road. Since the pandemic delayed a proper and festive memorial send-off, as Briel would probably have wished, the retrospective provides both a glimpse into his restless spirit, as well as a benediction.

If Briel liked anything more than applying bright, technicolor-hued paint to canvas, it was the celebrities – preferably glamorous –he often depicted. The Briel artworks at Crossroads include portraits of Bette Davis, Sophia Loren and Keanu Reeves, and images of dancers Mikhail Baryshnikov and Rudolf Nureyev. Artists Albrecht Durer, Salvador Dali and David Hockney hang on the walls as well as a portrait of tennis player Arthur Ashe. Briel is perhaps best known for another portrait he painted of the latter, a Richmond-born icon, that hangs in Washington at the Smithsonian's National Portrait Gallery. Briel may be the only Richmond artist represented in the august portrait gallery except for the late David Silvette, a Bellevue resident who painted author F. Scott Fitzgerald from life in 1935.

It wasn't preordained that Briel would become a painter of luminaries. After graduating from Douglas Freeman High School, he attended Hampden-Sydney College where he majored in classics, but revealed a fascination for celebrities, living or dead. In 1964, when United States Attorney General Robert Kennedy and his wife, Ethyl, landed by helicopter near the college campus to meet with Prince Edward County officials who had recently closed their schools rather than integrate, Briel was there. He presented Kennedy with a portrait he'd made of his brother, President John F. Kennedy, who had been assassinated just months before. In August 1971, now a Harvard graduate student in classics, Briel threw a bash in his Cambridge backyard for Lucille Ball’s 60th birthday. Although he invited Ball and assured invitees that the comedian would attend, she didn’t show. However, he did serve a big heart-shaped, frosted cake emblazoned: “I Love Lucy!”

In the 1970s, Briel returned to his hometown and, avoiding the juggernaut orbit of the Virginia Commonwealth University art school, established a combined studio, gallery and home in Carytown. He painted commissioned works in addition to colorful personalities. One such canvas showed Betty Moore, a professor of nutrition at the VCU nursing school, and a lively colony of urbanites who were rejuvenating houses on Church Hill. Svelte and dour, Briel painted Moore in a solid-colored dress enhanced by a colorful and fuzzy boa. In 1977, Briel telephoned me to ask if I’d have him to dinner with a prominent friend from his grad school days who was in town to give a lecture. Knowing that I was intrigued by former President Lyndon Johnson, his pal was Doris Kearns Goodwin, a presidential historian and future Pulitzer Prize winner, who had just published “Lyndon Johnson and the American Dream.” It was the first of her many presidential histories. We enjoyed a jolly and gossipy evening over eggplant parmigiana and wine.

A few years later Briel moved to Los Angeles. As a contemporary painter captivated by celebrity subjects, it’s not surprising that Briel went west intending to befriend David Hockey. The Englishman-turned-Californian is one of the planet’s most esteemed artists. The two men got along.

Returning to Richmond after an extended stay, Briel purchased an apartment in the Emrick Flats building in Jackson Ward, embracing downtown living in a former industrial building. From this penthouse he would continue to develop his distinct, theatrical, pop art-infused brand of celebrity portraiture. Then came his stroke.

I don't know if he ever met or painted Lucille Ball.