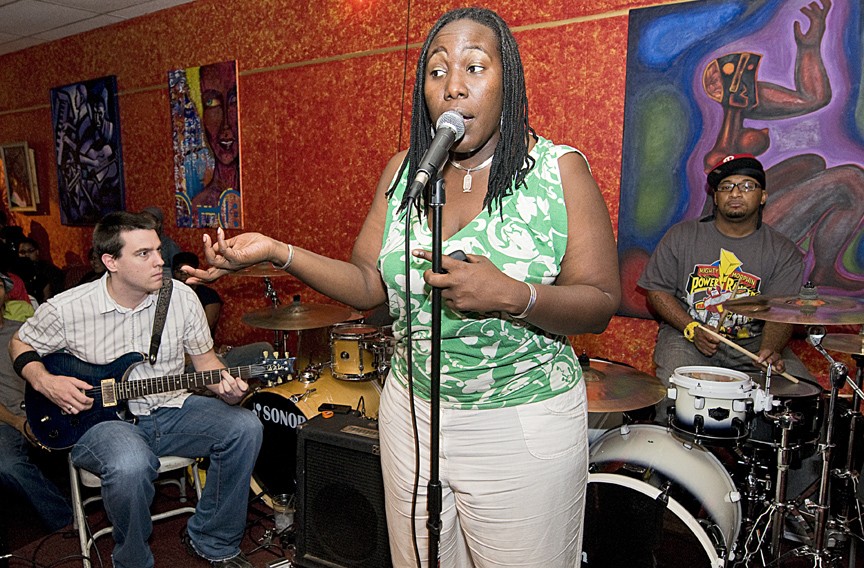 A Brooklynite by birth and Richmonder by choice, Lorna Pinckney was the kind of person who saw a need and sought to address it.

Her unexpected death yesterday at 43 leaves a gaping hole in the city’s creative community. In 2002, after originating Tuesday Verses, Richmond’s longest running live poetry and music series, she discovered that people were driving down from Washington to attend and replicated it there with Wednesday Verses in 2010.

Ask anyone who knew her, and they’ll say she made Richmond better by executing her vision.

“Lorna created a space where artists could feel free to be themselves and she ushered in new generations of performing artists, giving them the platform and support that they needed to grow and develop,” says Enjoli Moon, founder and creative director of the Afrikana Film Festival.

The two became friends in 2001 when they met at the earliest Verses incarnation at Tropical Soul restaurant on Second Street and Moon tapped her to introduce “Chasing Trane: the John Coltrane Documentary” at this year’s festival in September.

Tuesday Verses was remarkable for the opportunities it offered people who often felt like they had no voice or were at the end of their rope.

A 15th anniversary celebration of Verses was already in the works for Saturday, Oct. 14, and Nickey McMullin, a longtime member of the Verses crew, made it clear on Facebook yesterday that the celebration would go on because, “my Lorna would never have it any other way.”

The event's motto was living love and Pinckney embodied that as a caring human being who, in the opinion of many, enriched the city simply by being herself. Moon recalls how her laugh, her hugs and her overall energy always lifted people up and reminded them that they were loved. She always made a point to tell the crowds at Verses to get up and talk to someone they didn’t know, maybe even make a new friend. It’s what she did.

“Her business identity package made me shut the fuck up and get to work," she says. "Her self-promo skills made me sit my ass down and be about what I said I was about. Her black was so damn excellent!”

Pinckney was also an unabashed booster of her adopted city. “When you come here and you leave, you miss it,” she told Coffee with Strangers host Kelli Lemon last April. “The people in Richmond are what make it special.” Few embody that as well as she did.

Angela Patton, the chief executive of Girls for a Change, a nonprofit dedicated to supporting and inspiring young black women, knew Pinckney as a generous volunteer willing to host events whenever she was asked.

“She was the glue, connecter and bridge for RVA. Lorna never said one disrespectful word about anyone. She was the type of sister that made sure you saw the good in everybody. We had many conversations on how to make our city a better place for all through awareness, building bridges, dismantling conflict and engaging our youth. She was sunshine especially when she smiled at you.”

Egunfemi agrees that Pinckney’s girl power was out of this world. “Study her moves. She's the prototype. Thank you, sis, for being the guiding light. I’ve been trying to make you proud of me for ten plus years and I will never stop. Sister, you set the standard.”