Crowd gathers to mark the end of “the war to end all wars.”

Scott Elmquist Re-enactors portray Virginia-born wartime president, Woodrow Wilson, and his second wife on the Carillon steps at the Armistice Day Festival. The two came from the Edith Bolling Wilson Foundation Museum and Birthplace in Wytheville.

Worldwide on Nov. 11, as nations and communities large and small gathered at solemn ceremonies marking the 100th anniversary of the end of World War I, a crowd of a thousand filled the granite tiers of Dogwood Dell in Byrd Park for the Commonwealth's Veterans Day Ceremony. While none who served in the First World War is alive, the presence of scores of participants in subsequent conflicts was a sober reminder that the "war to end all wars" was anything but.

In brilliant morning sunshine, after the deep-toned peeling of a single Carillon bell, and amid hundreds of hand-held American flags, veterans of the Air Force, Army, Coast Guard, Marine Corps and Navy stood as Fort Lee's 392nd Army Band played a jaunty medley of familiar service tunes. Carlos Hopkins, the secretary of Virginia's Veterans Affairs Department, introduced the two student winners of an essay contest with the topic, "What was the impact of War World I in Virginia?" Each stressed the importance of women on the home front and African-Americans patriotically serving in an era when neither had full rights.

Keynote remarks by Gov. Ralph Northam called for serving current needs of veterans, some with maladies unique to recent conflicts. A graduate of the Virginia Military Institute, the Eastern Shore native rose to the rank of major during eight years of active duty as an army doctor in Germany where he treated the wounded from Operation Desert Storm.

Northam called unacceptable that 2,000 veterans living in Virginia had once been homeless, a situation the commonwealth has since successfully addressed. He recalled his own experience and how military service puts tremendous pressure on spouses and families. And health care issues since Desert Storm have included the medical challenges of treating those with loss of limbs, traumatic brain injuries and mental problems. Twenty veterans a day, he said, commit suicide.

On a positive note, Northam said these challenges are being met at four state veterans care centers, including new facilities in Virginia Beach and Fauquier County.

Finally, he said that strides have been made in programs to help veterans make a transition to civilian life. Theses include access to education, jobs and opportunities for entrepreneurism. 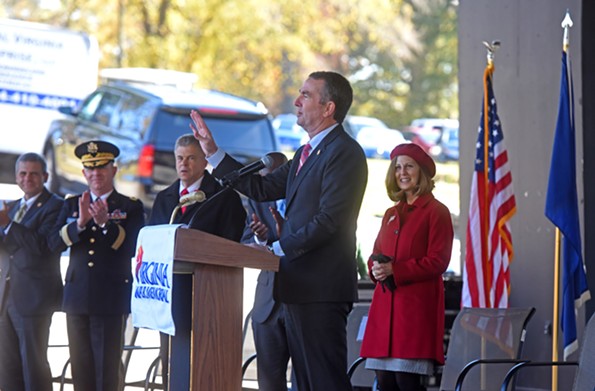 Then, acknowledging members of the media gathered nearby, and perhaps straying from his prepared remarks, the governor made a shout-out to the fourth estate. In wartime and peacetime, he said, "Because of you, our democracy is stronger."

The assembled then repaired to the Carillon, Virginia's memorial to the World War I dead, a few yards away via a brick walkway. There, they inspected World War I exhibits and the recently refurbished interior. Future renovations call for re-pointing exterior brickwork and sealing the second story stone terrace to stop chronic leaks to the interior.

Outside, at the Armistice Day Festival in progress, two costumed actors impersonated President Woodrow Wilson and his wife, Edith. They stressed that the Virginia-born wartime president had been insistent that after World War I, world peace could only come from a unified, international effort. S