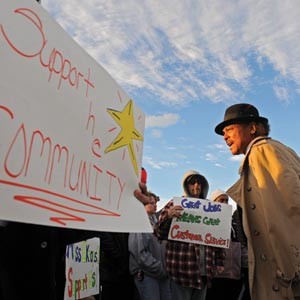 The wind scatters warmth and voices across Carytown in February.

On the third try, a helpful organizer provides a bullhorn to Shaquana Battle to speak at a pro-union gathering on the sidewalk in front of Martin's Food Market.

“I miss the community feeling from Ukrop's,” says Battle, a clerk for two years at the Forest Hill Avenue store, first for Ukrop's Super Markets and for the past year at Martin's. The store that's five rows of parking down the sloped asphalt also is among 25 that Martin's, owned by international giant Royal Ahold, took over last year.

Many people miss the Richmond staple.

Local 400 of the Food and Commercial Workers union used the anniversary of the sale to hold a candlelight vigil last week for the former local grocery chain even though Ukrop's wasn't unionized. In Richmond, Krogers are the only unionized grocery stores.

“What we want is for the workers of Martin's to have the same rights as seven out of 10 Ahold workers,” union organizer Wendy Weiner says. Giant stores — also owned by the company — as close as Fredericksburg are unionized. She says the rally is the kick-off of renewed efforts at unionization

About 50 people plus hangers-on attend the 5 p.m. rally, making speeches and following the call and response of the Rev. Lester Frye of the Healing and Living Waters Ministry in Richmond. A few drivers on Cary Street honk their horns, shoppers gape for a moment and anarchist Mo Karn flits about. The candles mostly flicker. A silent hipster hands out coupons for free wood-fired pizzas at Bakers Crust; you must dine  by the end of March to get the freebie.

It serves a meeting of old friends too.

“I went to high school with this one,” Don Gathers says of Myra Washington, giving her jovial hug. Gathers has worked at the Forest Hill Martin's for nine months. Washington works for Kroger. Both speak at the rally.

“You haven't done what Ukrop's used to do,” Washington shouts into the bullhorn and the wind.

The gathering ebbs and flows around a front-end loader stationed on the edge of the parking lot in case of snow; the graffiti-covered loader is a new feature.

Will it be gone before the pizza coupons run out?