No need to be vegan to be sweet on animal-free desserts. 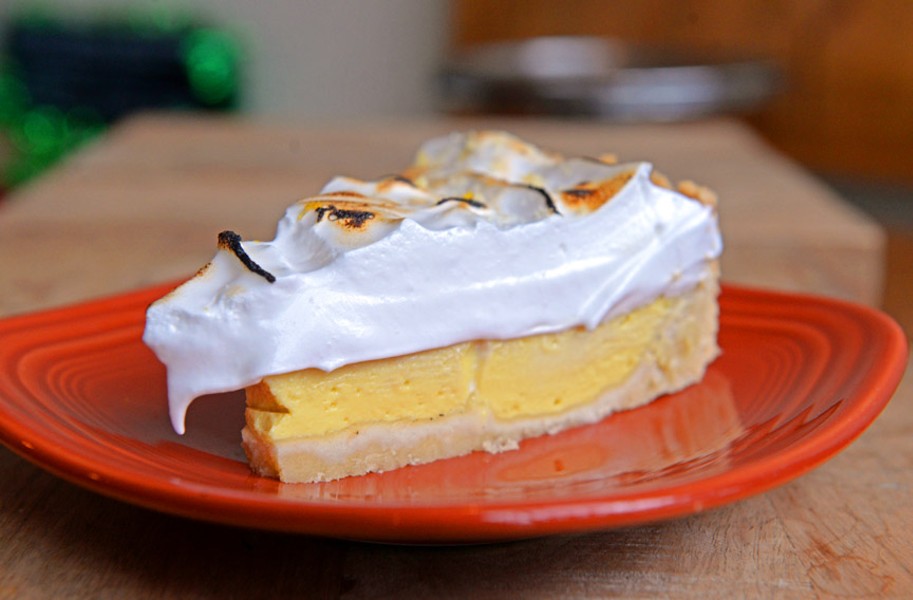 Scott Elmquist The vegan lemon meringue pie is one of several desserts at WPA Bakery.

A year ago, the National Restaurant News predicted vegan sweets as one of the top dessert trends for 2018. Richmond, for once, with its devoted vegetarians and vegans, was ahead of the curve with desserts free of animal products popping up all over town.

Because David Rohrer began his baking career at vegetarian outpost Ipanema in 2009, he was a vegan baker from day one. In 2012, he and Ipanema owner Kendra Feather opened WPA Bakery in Church Hill and in 2016, he became sole owner.

"Over the years, you find all sorts of tricks," he explains. For example he discovered ingredient replacements such as flaxseed and water for eggs and aquafaba, the "chickpea water you pour out when you make hummus," which acts exactly like egg whites and can be whipped into a frothy meringue. "If you know what to substitute for dairy, you can take a regular recipe and make it vegan easily."

In conventional baking, eggs and butter play important roles, so vegan bakers have to replace them with ingredients that can simulate their essential physical properties: flavor, leavening, binding and moistening. Instead of buttermilk, Rohrer uses soy milk with lemon juice to achieve the acidity required. Soy-based cream cheese allows him to make vegan cheesecakes.

Silken tofu can be used to make mock cream pies, which can then be flavored any way the baker chooses. His vegan Mexican chocolate pie, for example, features silken tofu, Abuelita chocolate and cinnamon, which Rohrer says sets up after you bake it.

Hannah Thompson began baking four years ago in Florida, followed by a stint at an Austin, Texas, pie shop. When she signed on in 2017 to be the baker for Ipanema, Garnett's Cafe, Laura Lee's, the Roosevelt and the Carriage House Café at the Valentine, she found herself suddenly doing a lot of vegan baking and learning how similar it was to regular baking.

One of her first lessons was that anything sticky, like nuts and dates, makes an excellent binder. "People overthink it," she says. "Vegan cakes actually hold up longer because it's the eggs that dry out in regular cake. Plus vegan cakes are lighter on your stomach."

All of the fruit pies she makes have shortbread crusts that use margarine and the fillings are naturally vegan.

"Once people get over the fact that a dessert like our fig walnut cake or blueberry pie is vegan, they realize they'd never have known if we hadn't told them," she says.

To flavor the popular lavender earl grey tea cake, Thompson uses a coffee grinder to crush the tea leaves and steeps them in water to replace the recipe's liquid.

"I love getting to experiment with different ingredients," she says. "Upholding the reputation of Ipanema is part of the appeal, too."

The objective of vegan baking is getting moist, tender baked goods that aren't gummy or crumbly, but that can be difficult when baking without butter and eggs. Vegan bakers have devised clever ingredient combos and baking techniques to work around these challenges. Almond milk, soy milk and coconut milk, the latter prized for its excellent flavor and thickness, are go-tos.

Proper Pie's Neil Smith never set out to become a vegan pastry chef, but when he opened his shop in 2012, he considered the trend toward healthier eating and chose to offer some dairy-free options. Generally, the vegan selection on his menu includes one savory pie, three to four sweet pies and candy bars.

"We sell a lot of vegan pies, but I'd guess 60 percent of the people buying them aren't vegan because they ask for whipped cream or ice cream on them," he says with a laugh.

Since he'd not done any vegan baking before opening the shop, he found dairy-free baking far trickier than regular baking. Much trial and error went into creating a vegan pastry crust worthy of the popular vegan pies such as mock turtle and strawberry rhubarb.

"Dough made with soy-free butter is definitely more temperamental than regular dough," Smith says. "The oils in vegan butter are different, so the dough acts differently."

Another requirement of a vegan baker is paying close attention to ingredient labels to avoid those with milk by-products, whey or rennet in them. Even chocolate chips can contain milk, and Rohrer says it's imperative that a vegan baker review the ingredients in every element of the recipe just to be sure.

"If you specialize in vegan baking, it has to be all-vegetable," he says with emphasis. "But just because it's a vegan dessert doesn't mean it can't be refined and decadent."