"Hound of the Baskervilles" scares up plenty of yuks at Hanover Tavern. 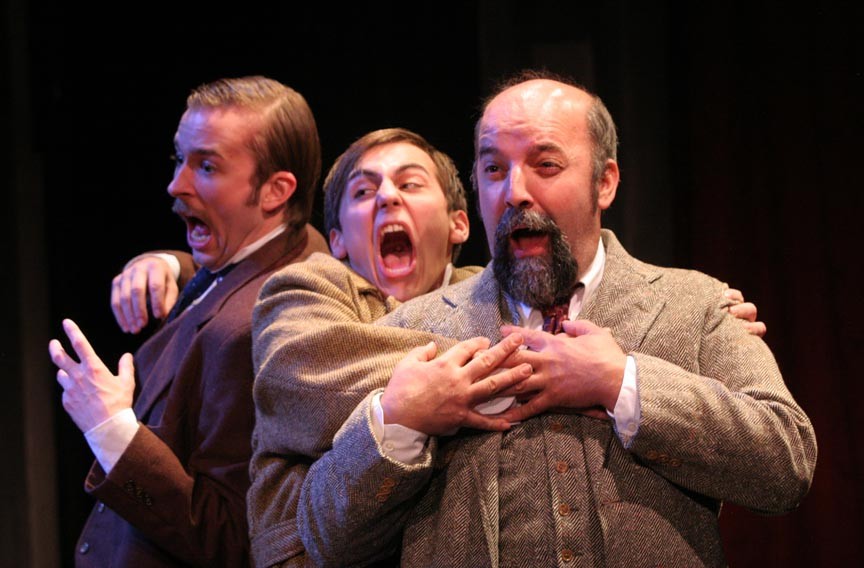 Call it a parade of Holmes. Between the films starring Robert Downey Jr., the popular British series, and an upcoming American television show, Sir Arthur Conan Doyle's genius detective Sherlock is enjoying a surge in popularity. Into this media maelstrom comes Virginia Rep's comic take on Holmes, "The Hound of the Baskervilles," playing at Hanover Tavern.

This madcap romp keeps the complex plot of Doyle's popular 1902 novel mostly intact with more than 20 characters played by three versatile actors. While much of the mayhem is the result of quick changes and goofy characterizations, the best laughs come when the actors step out of character and engage the audience in meta-comic conceits involving the haunting of the theater and critical Twitter remarks about the production.

The case that drives the plot involves a legendary beast that supposedly haunts the swampy mires of Darkmoor, snacking on members of the Baskerville clan. Holmes (played by Matthew Mitchell) gives the bumbling Dr. Watson (David Clark) the task of shadowing the lone remaining Baskerville, Sir Henry (Adam Turck). All manner of loopy and suspicious suspects appear, even a love interest named Cecile (fetchingly played by the moustache-wearing Mitchell), until Holmes appears to cut through the ubiquitous fog.

Director Gary Hopper trots out all the standard tropes in support of the silliness, many of them tired and distracting (lisps, limps, etc.) but nonetheless met with exuberant howls of laughter during the performance I attend. I'm more amused by the forays beyond the fourth wall, with Turck convincingly spooked by stage ghosts and Clark transforming easily from the witless Watson to a staid acting veteran. I wish Mitchell had distinguished the self-satisfied version of "Matt Mitchell" that he portrays from his characterization of an egotistical Holmes, but his insistence on a recap of the first act after intermission is a comic highlight.

The production's staging effectively sets a spooky mood, with a busy sound design by Derek Dumais creating the dark atmosphere. While the stage is largely empty, set designer Terrie Powers supplies some inventive set pieces (a steam-bath bench that doubles as a hansom cab, for instance) and K. Jenna Ferree's lighting design cleverly assists in several jokes. The cast brings a winning energy to the proceedings, making this "Hound" much like an eager puppy: You can't help but be entertained by its antics. S