Our architecture critic looks at why to rehab the existing Richmond Coliseum and make it a centerpiece for redevelopment. 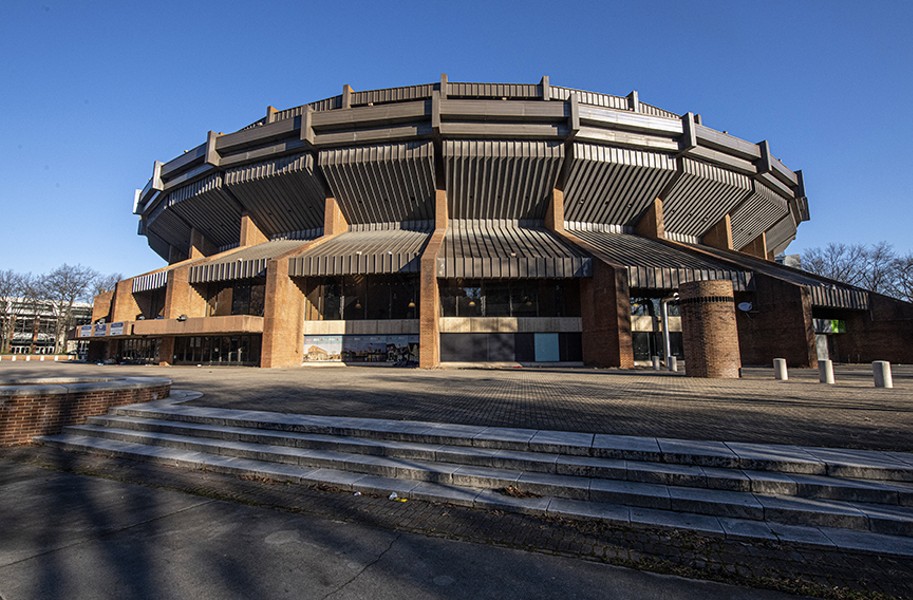 Scott Elmquist Distinctive brick buttresses support the upper levels of the Coliseum, which opened in 1971 as a centerpiece of downtown revitalization.

Standing at the former Best Products headquarters building at the suburban crossroads of Interstate 95 and Parham Road, county officials and developer Green City LLC announced what appeared to be a re-wrapped Navy Hill project. This included a 17,000-seat arena that had been part of a $1.4 billion redevelopment effort, rejected by City Council in February.

Henrico’s envisioned $2.3 billion mixed-use project also would include two hotels, 2,400 residential units, retail and 2.23 million square feet of office space: Green City which will transform 200 acres of now mostly rural and open lands into multi-use development is being promoted as an “eco-district village.”

Richmond’s unexpected gift? With Henrico embracing an arena, the city is off the hook for $300 million in financing and construction costs for a new facility. This frees the city to do the authentically eco-friendly thing by reopening the now-shuttered, 12,000-seat Richmond Coliseum. Imagine how $300 million saved on building a new arena could be leveraged for affordable housing, a convention hotel, a GRTC transfer station and other facilities still envisioned for Navy Hill’s 10 blocks. And it won’t take from five to 10 years to activate a needed venue for conventions, sporting events, college commencements, political gatherings, concerts and religious gatherings. 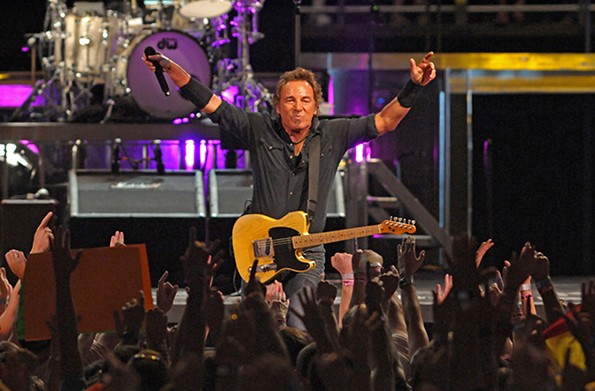 News last month of the proposed Henrico County arena was well-timed. Two weeks later on Dec. 14, City Council approved an ambitious city master plan, Richmond 300: a Guide to Growth. The 208-page document calls for “designing an equitable, sustainable and beautiful Richmond for its 300th birthday in 2037.” It addresses every part of the city, stressing tracts of undeveloped acreage where new uses could sprout. It reports that downtown has 77 underdeveloped acres, comprising 26% of total downtown land area. The Navy Hill district consists of some 20 of those acres.

Richmond 300 lists specific action plans including a primary first step, which the council plans to address this winter. That is the development of a Coliseum Area Framework Plan for the former Navy Hill area. With guidance from this framework plan council seeks to reposition city-owned assets into revenue-generating properties. Discussion of where a casino might be located could also focus on this neighborhood.

By restoring the existing Coliseum and thus avoiding the inconvenience and extended costs of demolishing the behemoth, estimated from $8 to $12 million, plus financing a new facility, the framework plan can establish the Coliseum as a centerpiece for redevelopment. Add the adjacent Blues Armory, a 111-year-old, architecturally distinctive landmark to the mix, and you have two dynamic elements for urban design. 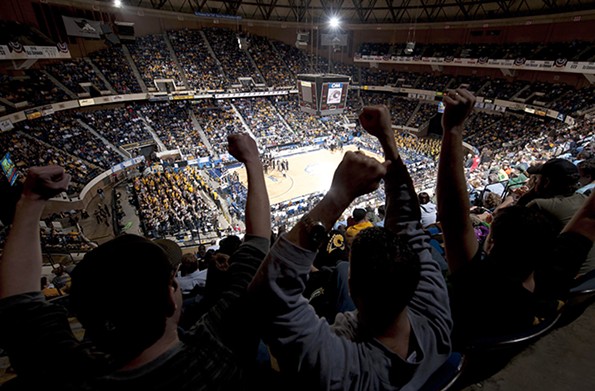 First however, the Coliseum’s condition must be determined. Although demeaned as “functionally obsolete” by some who sought its destruction, this was news to thousands of people who attended events there until it was unceremoniously closed. And the fact that there were no reported structural issues was another reason for pushback on the Navy Hill plan.

Critical to successfully redeveloping the Coliseum and its surroundings is recognizing that the 1971 structure is a landmark and city icon. Its design architect was Vincent G. Kling & Associates of Philadelphia. One of the nation’s pre-eminent firms, Kling was laser-focused during the mid-20th century on revitalizing American downtowns. It redesigned major parts of Philadelphia, some controversially. 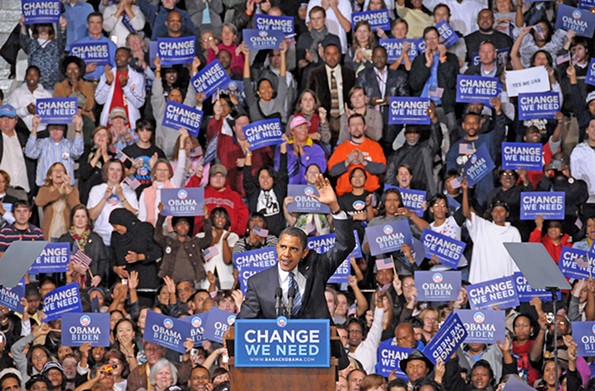 There’s no denying that to many the Richmond Coliseum is hard to love. It is a prime example of architectural brutalism – raw and honest conceptually and built of concrete, metal and brick with little or no decoration. Rest assured, other cities have brutal buildings that their residents love to hate. Consider Boston’s City Hall and New York City’s Madison Square Garden-Pennsylvania Station complex, both built in 1968, and the 1975 J. Edgar Hoover Building in Washington. Those communities, however, have each recently reached a grumpy accommodation. 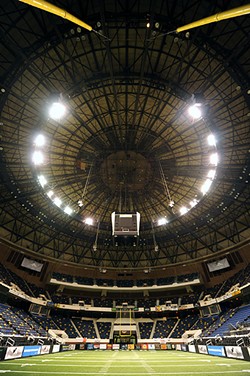 In Richmond, architect Kling placed the Coliseum on a once visually prominent axis looking north on North Sixth Street, seen and even alluring when viewed from East Grace Street near the Dominion Energy Center. That vista was shut off by the 6th Street Marketplace, a downtown infill enclosed mall project. The Coliseum was further hemmed in over time by parking decks on two sides – guaranteed urban design downers – and the superblocks filled by the Greater Richmond Convention Center. By demolishing the defunct Marketplace’s food court, the Coliseum would re-emerge and reconnect with the Blues Armory that inspired the arena’s distinctive metallic, fortresslike crenellated cap, brick trim and interior rounded arches. One fan is Robert P. Winthrop, a Virginia architect and prominent architectural historian.

“The elaborately articulated exterior and the dramatic interior lobby arcade make this one of the most successful [buildings] of its type,” he maintains, comparing the Coliseum favorably to contemporarily built arenas in Norfolk, Hampton and Roanoke and Salem, all still in operation.

Another major drawback of the Coliseum’s design was how the box office was situated on the underground level off Leigh Street and how the depression of Leigh adds to the building’s isolation. This, however, can be remedied by bringing Leigh to the surrounding street level. 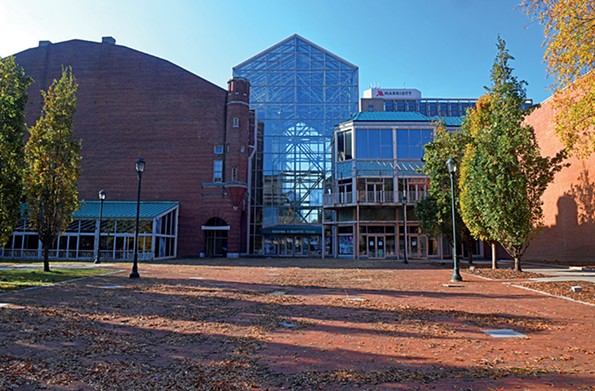 Clearly, 21st century culture embraces the internet and cyberspace over physical and three-dimensional fine art and architecture. So it’s understandable, if frustrating, that debate over a new downtown arena never mentioned architecture. In fact, the proposed 17,500-seat arena appeared in renderings impressionistically as a fuzzy blast of bluish light. But the Coliseum was intended to stand out. Today, its metal cladding might be more at home on a set of a “Transformers” motion picture than near the National Theatre or the 18th-century home of John Marshall. But let’s remove the Coliseum’s public-liability label disingenuously applied by some. Let’s restore the tough concrete and brick structure to the level of comfort and standards we afforded our publicly owned 1920s entertainment venues, the Dominion Energy Center and the Altria Theater.

At 50 years old, the Richmond Coliseum should be eligible for historic designation and preservation tax credits. Let’s explore the future for this futuristic-looking arena so that it can continue to serve.