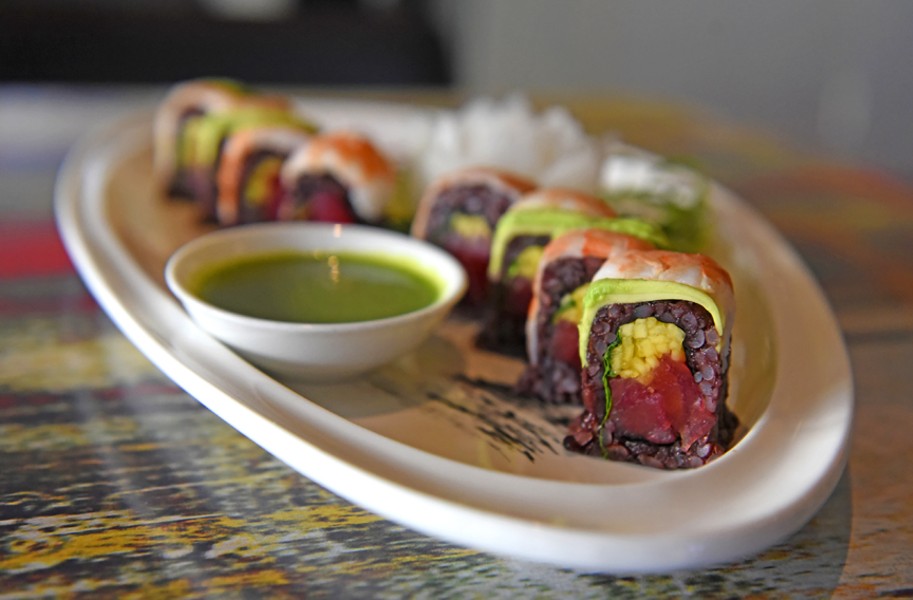 Eat Restaurant Partners, the team behind restaurants as wide-ranging as Beijing on Grove, Boulevard Burger & Brews and Wong Gonzalez, is still ramping up, creatively speaking.

Its latest concept, Red Salt Chophouse & Sushi, was inspired by the Himalayan pink salt used to season steak and cure sushi, and it expands the concept from there with dedicated chefs for both cuisines. It's an enormous place — 6,000 square feet — and luxe, appointed with a long, sinuous bar, curving red booths, a chain-mail curtain separating the bar from the main dining room and, yes, a wall of pink salt blocks behind the sushi bar fitted together like a jigsaw puzzle.

For those coming from the city, it's a slightly surreal drive once you pass Short Pump Town Center. You'll continue on and see a farmhouse miraculously still encircled by fields and then land at the GreenGate shopping center that includes the expansion of a few city businesses: Carytown Bicycles, the Daily Kitchen & Bar and chain restaurant Mellow Mushroom. So many worlds colliding.

Lunch is a filling proposition at Red Salt given the choice of nine bento boxes, all served with California rolls and choices of side salads, Caesar salads or fries. There's plenty to savor in the abundance of seafood in a lobster-and-lump crab sandwich ($17), but the Caesar salad tagging along is so overdressed that the greens drip with every bite. Something tells me this isn't how Michelle Obama wanted us to eat vegetables.

Traditional rolls prove that old favorites earn their status with fresh ingredients and a deft hand in preparation. Supple pieces of tuna and a sassy mayo are all that's required to make a spicy tuna roll ($6) a winner, while a sweet potato roll ($5), its interior still warm, delivers a cross-cultural bite marrying Asian and Southern.

The reward for being willing to sit at the bar or on the patio overlooking Carytown Bicycles is the special 5-5-5 menu, which reads like a $5 sampler of the kitchen's mission and runs daily until 6:30 p.m. Between lunch and dinner, 2:30 to 5 p.m. daily, the 5-5-5 menu is the only option.

Spicy sour cream spiffs up a plate of potato cakes oozing cheddar, bacon and scallions. Slathered in bacon-onion jam under a blanket of cheddar, baby burgers go down easy. Ditto the five o'clock roll of spicy kani — or imitation crab — cream cheese and sweet soy coated in crunch, as does the hai-five roll composed of white tuna, piquant red onion, cilantro and sweet Thai sauce. Seaweed salad dressed in sesame oil gets its textural contrast from matchsticks of cucumber and sesame seeds. For $25, two of us walk away with an elegant sufficiency.

This being a chophouse, hand-cut steaks take up a fair portion of the dinner menu and can be accessorized with eye candy ($4) — a blue cheese crust, coffee rub, wild mushrooms, wasabi chimichurri — or done up "baller style," with a lobster tail ($25) or lump crabmeat, asparagus and bearnaise ($18), among other indulgences.

Given the lack of overlap between critics and ballers, I opt for the thriftiest choice, a 7-ounce filet mignon ($38), which my server insists I cut open in front of him to assure it's been cooked to the proper temperature. Warm red center, check. Mound of herb butter, check. Tender enough for the toothless, check. Perfection, in other words, if filet mignon is your thing. A thatch of broccolini under a flurry of grana padano cheese and garlic breadcrumbs ($9), one of a baker's dozen of generous sides, registers as toothsome and tasty.

Boasting tuna, mango and cilantro with shrimp and avocado on top, the most satisfying part of a Wonder Woman roll ($17) — besides the name — is its forbidden rice, the black rice once reserved for Chinese emperors, with a distinctive roasted nutty flavor and velvety texture.

A s'mores brownie ($9) is everything you'd expect from a chophouse dessert: large, overly indulgent and inoffensive, if a tad uninspired. It's also our server's suggestion.

Trained to up-sell at every opportunity, the staff seems enormous and operates like a well-oiled machine. On a Wednesday night at 5:15, we're told there's not a single table available, but they'll squeeze us in if we promise to finish before 7. Later, we overhear a hostess say there are 100 reservations on the books tonight, and, leaving, we notice that the private dining room is also fully committed.

Safe to say Red Salt is just what the near-Goochland baller crowd was craving. S