On a teacher workday, educators take to the streets to demand more funding for public schools. 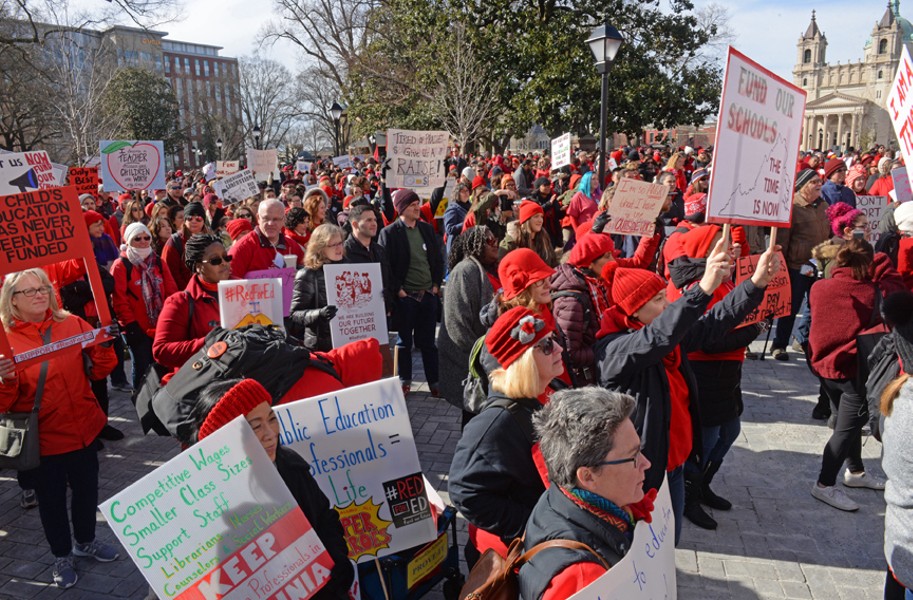 Scott Elmquist Educators, parents and students march from Monroe Park to the Capitol to demand more funding for public schools.
Report cards go out at the end of this week and Michelle Brown could really use Monday, a teacher workday, to finalize her students’ grades. Instead, the 35-year-old elementary school teacher and more than a thousand fellow educators, students and parents marched from Monroe Park to the State Capitol to demand more funding from the General Assembly for public schools.

The theme is Red for Ed, a movement created by the National Education Association to represent the fight for more funding, higher wages and better working conditions in public schools across the country.

“I’ve been hesitant about putting my teacher voice out there,” says Brown, who’s been teaching at Broad Rock Elementary School for 10 years. “But there’s strength in numbers. Even though I may not experience some of the harsh conditions that others are facing, it’s not just about me. I’m marching for the other students and teachers.”

Also in attendance are Richmond School Superintendent Jason Kamras, whom Brown says has been a vocal supporter of the march and the overall movement to improve public schools, as well as first lady of Virginia Pam Northam and Richmond Mayor Levar Stoney.

“I would not be here today if it wasn’t for great teachers, great coaches, great counselors who cared about my success and believed in me before I even believed in myself,” says Stoney, clad in a red tie and red knit cap. “I think a lot of teachers here in our state saw what was going on in the Arizonas and the Kentuckys and thought, you know, it’s time for us to do the same. And I’m proud of them for stepping up.”

Virginia is ranked 11th in the U.S. in per capita personal income. According to the education association, in 2017 Virginia was ranked 34th in teacher salaries and 43rd in percentage of revenue from state government.