Shock rock originator Alice Cooper on his love for Gwar, his distaste for hippies and how he almost shot Elvis. 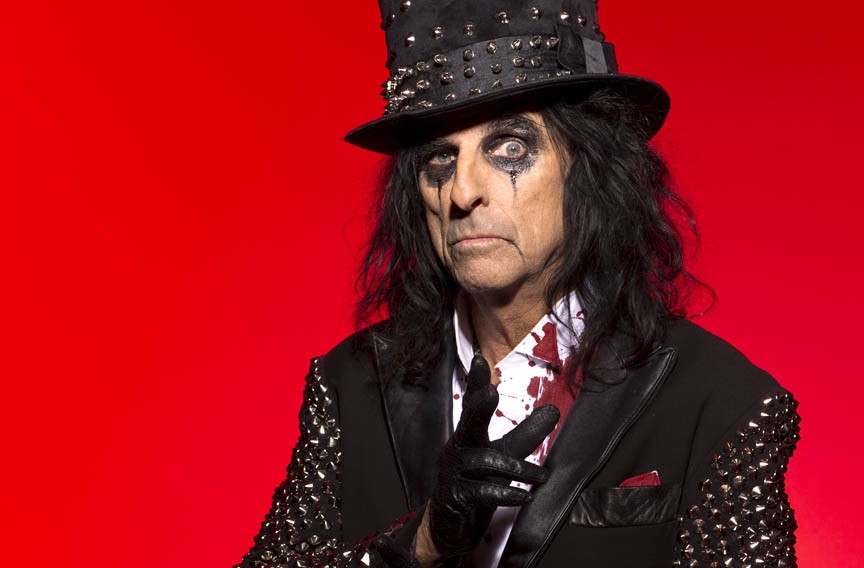 Dave Brockie still fondly recalls the first album he brought home that horrified his mother. It was Alice Cooper’s concept album, “Welcome to My Nightmare,” from 1975.

Brockie, aka Oderus Urungus, the frontman of Gwar, says it was his first step into the world later dubbed “shock rock” — and it was only by following these trailblazing footsteps that he discovered Gwar.

“I couldn’t have more respect for him as an artist,” Brockie says of Cooper. “He truly is the Michelangelo of the movement. Plus he’s a fellow golfer, and way better than me.”

It would seem the respect is mutual. Cooper, 65, is quick to praise Richmond’s Gwar, especially because the group’s been spewing bodily fluids for three decades. “I love Gwar,” Cooper says by phone. “Anybody that has their own costume studio is OK by me.”

On the heels of another tour filled with fake guillotines, baby dolls and electric chairs, Cooper considers Gwar’s impact. “I love their sense of humor and just wish you heard them on the radio more,” he says. “They need to sit down and write a song with Desmond Child, or a radio guy — but not lose their edge. They’re one of the great ongoing American treasures, I think.”

Perhaps Cooper feels a sense of fatherly pride for the space mutants. After an early career making bizarre albums for Frank Zappa, the singer sought to slip a dagger into the heart of the late-’60s hippie movement in Los Angeles with dark, loud rock.

“The [Vietnam] War started out righteous and ended up being a money-making scheme, but at the beginning I would’ve gone into the Army,” Cooper says. “The hippies in L.A. thought I was right-wing. I’d say, ‘No, I’m an American.’ So we did not fit in with hippies, we didn’t want to live in a commune. I wanted a Ferrari, I wanted to date a movie star” — which he later did, dating Raquel Welch.

A Detroit native whose real name is Vince Furnier, Cooper has been extremely calculating about his career. He created the character of Alice Cooper out of necessity, he says.

“If I were the audience, what would the ultimate rock star look like? I want to see a definitive villain, Moriarty, Dracula. When he walks onstage, people take a step backward,” he says. “To this day when I write or perform for Alice, I’m thinking, ‘This is what Alice would do.’ I treat him in the third person.”

Now a born-again Christian and Republican property tycoon, the distance between Furnier and the villainous character may be shrinking, dependent upon your view of the GOP. But it was the singer’s deep love of golf that saved him from alcoholism and crack more than two decades ago, when he says he stopped drinking “a bottle of whiskey a day and throwing up blood every morning.” Now Cooper helps other rock stars get treatment. “If they come to me first,” he says. “That’s the prerequisite. That’s half the battle.”

They trust him for good reason. Reading Cooper’s autobiographical book, “Golf Monster,” is akin to a Forrest Gump ride through classic rock. “Sure, we did the Whisky a Go Go on a Wednesday night with Led Zeppelin, the next night was with Pink Floyd,” Cooper says. “We were all just trying to eat and stay alive, we weren’t rock royalty yet. It was a fraternity. I would drink with Jim Morrison — Val Kilmer really did a pretty good job [portraying him].”

Cooper’s peak fame came during the bloated rock excess of the ’70s, when he penned memorable hits including “Eighteen,” “School’s Out” and “No More Mr. Nice Guy.” He still regularly performs the hits during his highly theatrical, ghoulish stage show.

Stardom brought some unusual moments. Like the time Elvis Presley invited him to his penthouse, only to corner him in the kitchen, hand Cooper a loaded .32-caliber pistol and ask him to point it at his head. Cooper took aim at the King, and a moment later, Presley did a high roundhouse kick to knock the weapon out of his hand in a display of his judo prowess. “There was that moment there when the little guy was on my shoulder saying, ‘Just shoot him,’” Cooper says, still laughing at the thought.

Back then some of Cooper’s closest friends were comedians — not too shabby ones either. He regularly hung out with Peter Sellers and Groucho Marx, though he won’t say who was funnier. “Sellers was that spontaneous character where you’d be having dinner, and he turns into Clouseau, and it really is him,” he recalls. “Groucho was just extremely clever, he was sharp as a tack. You’re sitting having a dinner, and he says, “Excuse me, Alice, I’ve got to go insult the maitre d’. And he would go do it. Eighty-seven years old, whatever came out of his mouth was funny.”

Also there was Cooper’s so-called Hollywood Vampires clique, which met upstairs at the Rainbow Bar and Grille in Los Angeles, a sloppy group of celebrity drunks who included John Lennon, Harry Nilsson, Mickey Dolenz and Keith Moon. Cooper never has been very political, he says, but there were some heated arguments. “I was sitting there going, ‘John [Lennon] I don’t care — Harry don’t hit him,’” he says. “It was like the father with two kids in the backseat. Don’t hit each other!”

These fuzzy memories have inspired him and longtime producer Bob Ezrin to record a covers album of FM classic rock fare such as the Doors’ “Break on Through,” the Beatles’ “Revolution” and the Who’s “My Generation” that really are “about all my dead drunk friends,” he says. [Since this interview took place, Cooper reportedly has been in talks for the Broadway role of the Green Goblin in Bono’s “Spider-Man: Turn Off the Dark” at a reported $150,000 a week].

When asked what he thinks about rock music today, Cooper seems unimpressed, acknowledging that better technology has unleashed a tidal wave of mediocre bands.

“It’s like golf or baseball, you should have to go through minor leagues and pass a test before you’re allowed to go out on tour,” he says. “There’s an avalanche of music out there, most of it very introspective, and it’s not rock. You should have to go to tour school. There’s only a certain amount of venues out there. When you perform live, you can’t fake it.”