Local 'Zines: Art and Anarchy with a DIY aesthetic 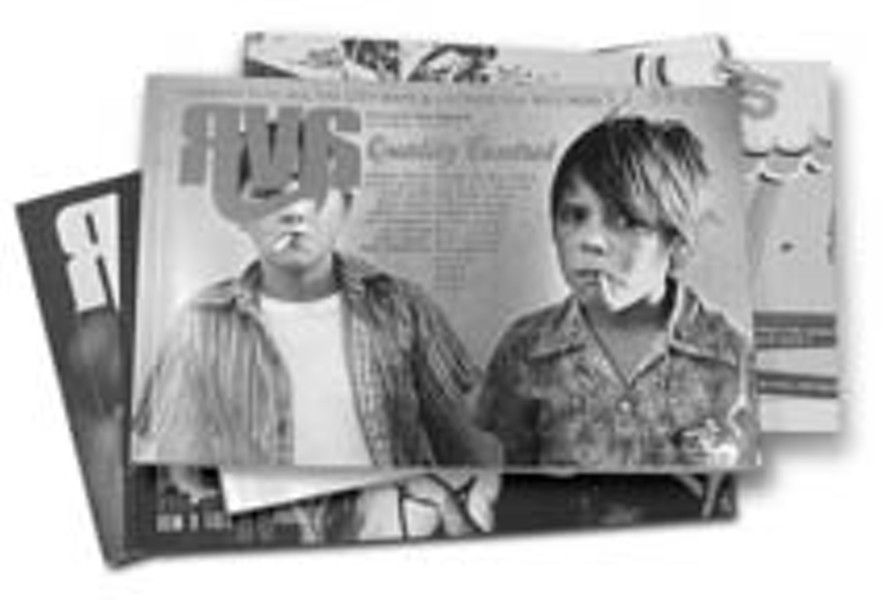 "I wanted to offer an outlet for underachievers with a lot of talent they don't know what to do with," says Harris.

Working with ideas that wouldn't fly in the corporate world, Harris has married the polished sheen of the magazine with the creative grit of the 'zine. The result is a funky, visually stimulating read that will suck you in, shake you up and spit you out, hipper and more informed than before.

Published on the first Friday of every month, in conjunction with the First Fridays art walk, the 80 horizontal half-sized pages of RVA mag are composed of film, music and book reviews, rants, poetry, cartoons, short stories, city guides, interviews, profiles and opinion pieces, as well as full-color collage, art and photography.

RVA Mag consistently returns to the ins and outs and ups and downs of life as an urban Richmonder; suburbanites, be warned. Questions of why no one is able to leave the Capital of the South and how to tell if you live in the Fan are meditated on with philosophical consistency. Highlights from the first six issues include the 12 steps to a good — read alcoholic and self-indulgent — life by the mysterious "International Gentleman," the chronicles of an Appalachian-trail-hiking filmmaker named Kevin Gallagher (aka Fester), the evolution of the Mustache Gang and any of the pee-your-pants-funny film reviews by Ted Blanks.

Pop culture went through a rough phase a decade ago when grown-ups in the rock and art world dealt with adult topics like sex and drugs in the style of children ages 2 to 6, calling it "alternative." Think Courtney Love shrieking about heroin in a baby-doll dress and pigtails. Or 20-somethings toting lunch boxes and Mr. Rogers' face printed on ringer T-shirts. At the time it was hard to imagine anything of value coming out of the whole mess but The Drama ($5.95, self-published), an art quarterly published here in Richmond, proves that something has.

Joel Speasmaker and Trevor Robertson, editors of the two-year-old publication and survivors of the tantrum of the '90s, showcase the work and lives of contemporary artists. Despite being a product of that decade, The Drama ($5.95) eschews anything ironic or snarky, resulting in a childlike sincerity without the brattiness.

Often the magazine works from a theme. In the A to Z issue, 26 artists reacted to the letters of the alphabet with comics, doodles and collage. "The Drama," which often uses a teensy font, is a quiet publication dense with words and pictures. It's lucky that readers have three months to absorb each issue.

The publication is as much a lifestyle magazine as an art rag. In 10 lengthy interviews, the True Love issue introduces readers to couples who work together. Ben and Renee Loiz met in a health foods store and now work out of their home studio producing a line of screen-printed T-shirts, doing freelance art direction and creating their own art.

Like the Loizes, many artists featured in the magazine are cultivating freelance careers. They add professionalism to the do-it-yourself aesthetic. The hallmark of this group is how they use technology to build a community that keeps in touch through e-mail, shows off work on Web sites and can afford a cheap scanner. The Drama hits the right notes as an art catalog, taking a creative moment on its own terms. The Drama can be found in Richmond at ADA Gallery, Nonesuch Art and Apparel, Velocity Comics, Plan 9 Music, Quirk Gallery and Chop Suey Books or online at www.thedrama.org. — Amy Biegelsen

Richmond anarchist 'zine Complete Control is "equal parts soapbox, journal and public forum fodder," according to Greg Wells, the editor and primary author. Published once or twice a year, the 'zine's subject matter zigzags between lengthy accounts of Wells' personal life and articles on the struggles of anarchists and their radical cohorts to change existing power structures. A more coherent, thought-provoking and even poignant experience awaits readers who pick up the recently released "Complete Control: An Anthology 1997-2005" ($8, Plan-It-X Books, www.plan-it-x.com).

A random issue of "Complete Control" will baffle most readers who are unfamiliar with Wells or anarchy. One issue is completely composed of journal entries about a luckless cross-country tour with a punk rock band, while another issue is full of articles about progress and challenges on a number of fronts in the Richmond area. Activities that feature prominently, like Critical Mass and Food Not Bombs, are barely explained. Although the anthology affords little assistance to the uninitiated beyond the short explanatory comments Wells adds to each issue, the reader can learn much about the anarchist movement through reading the 12 issues in the book. Individual political beliefs will dictate whether it leaves one sympathetic, appalled or in between.

One of the most satisfying aspects of the book is Wells' metamorphosis over the eight years covered in the anthology. Wells grows from the fervent idealism of his early 20s into a wiser, though still ardent, activist. He goes from sometime urban squatter to Oregon Hill homeowner. Tempered by the tragedy of a close friend's suicide and by the tendency of the radical movement to ignite and then fizzle in this conservative Southern city, Wells currently lives in what he calls a collective household and is working on such issues as helping urban neighborhoods resist the encroachment of Virginia Commonwealth University. Call 644-2544 for more details. — Mary Mullins