As 22,000 people rallied in support of the Second Amendment, the Mayor and other city officials celebrated the famous civil rights activist.

Scott Elmquist A gun rally held during this year's Lobby Day was largely successful in that protesters' messages were shared and there were no violent incidents reported, even though many in attendance carried weapons and there had been early reports of possible threats of violence. Most opposition groups stayed away out of fear, so the crowd was largely dominated by one side of the issue.

As dawn broke over the beltway, thousands of Second Amendment rights supporters spilled into the streets to protect what they perceived to be a state legislature threatening the constitutional right to bear arms in light of three common-sense bills that passed the state senate.

The bills inciting such a large out-of-state response to a state-specific issue at the Lobby Day rally hosted by the Virginia Citizens Defense League would limit the scope of gun ownership in the Commonwealth to the purchase of one handgun each month, requiring buyers to submit to background checks before purchase and allowing localities to ban firearms in parks and public buildings. Democratic Governor Ralph Northam has said he would sign each bill into law if passed by the Democratically-controlled House. [A proposal for a "red flag" law, allowing authorities to temporarily take guns away from anyone deemed a danger to themselves or others, is also being considered.]

“Any group that comes to Richmond to spread white supremacist garbage, or any other form of hate, violence, or civil unrest isn’t welcome here. Thousands of law-abiding Virginians simply want to have their voices hard at the seat of government,” said House Republican Leader Todd Gilbert in a statement in advance of Lobby Day. “While we and our Democratic colleagues may have differences, we are all Virginians and we we [sic] will stand united in opposition to any threats of violence or civil unrest from any quarter.”

Access to Capitol Square was limited to one entrance at N 9th and East Grace Streets which banned everything from firearms and facemasks to scissors and baseballs as individuals were subjected to passing through magnetometers and a bag search following an Executive Order from Gov. Northam last week amid concerns about the sheer size of the event and the number of militia groups expected to attend.

On Wednesday, Northam announced a State of Emergency in light of concerns about “armed militia groups storming our Capitol.” The next day, the FBI announced the arrest of three members of the neo-Nazi group, the Base, who had planned to attend the Richmond rally. The emergency order banning weapons on Capitol grounds took effect Friday and will last through Tuesday as the many groups disperse -- some driving back as far as Texas, such as right-wing conspiracy-theorist icon Alex Jones of “InfoWars,” who on Monday crawled through the downtown area in an armored vehicle using a microphone to chant “1776 for all Americans!”

In complete contrast just a few blocks away, the remainder of the River City was going about business as usual -- to include a day packed with service opportunities in celebration of the Martin Luther King Jr. holiday.

“This is our charge, this is our solemn duty: service, not silence, action speaking louder than words -- not just one day out of the year, but each and every day of the year,” said Richmond Mayor Levar Stoney to a crowd of elected officials and members of the community at the historic Ebenezer Baptist Church on Leigh Street shortly after 9 a.m. 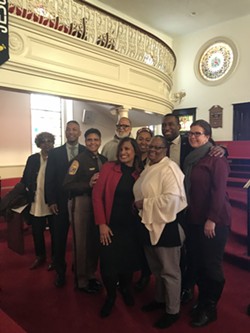 The event was cohosted by Second District councilwoman Kim Gray and sponsored by the Americorps, the Valentine and Black History Museums and Whole Foods as well as the City’s Neighbor to Neighbor program and Parks & Rec to conduct service projects including building community garden beds, cleaning up the city’s parks, beautifying playgrounds and school common areas and assisting seniors with their leaves.

“Unlike many other days we celebrate, [today] is less about vacation and more about vocation [...] it's not a day off, it's a day on, so today we go out into our community to serve our community,” Stoney said. “We do this because helping someone in need isn't a 9-to-5 thing, it's a 24/7 thing -- lifting someone up isn't a 'I'll be there later' thing, it's a 'I'm coming right over,' thing, and doing the right thing never takes a day off.”

Absent counter-protestors, the large numbers seemed peaceful and even jovial despite the high temperatures being in the upper 30s. There were no apparent signs of white supremacist activity in the crowd and the event felt, in some ways, like a Trump rally, with chants of "USA" and at least one sign comparing Gov. Ralph Northam to Hitler. Trump t-shirts such as "Trump 2020: Fuck Your Feelings" and "Impeach This" were being sold by busy vendors, who also had stickers that read "All Rifles Matter."

By 11 a.m., the VCDL rally began inside the fenced-off area led by President Philip Van Cleave, an outspoken lobbyist for firearms in Virginia and infamous for falling victim to comedian Sacha Baron Cohen in 2018, when he was duped into filming a gun-training video for children called “Kinder Guardians” and including weapons such as “Puppy Pistol.”

After the Sandy Hook school shootings that left 20 children and six adults dead, both Van Cleave and Jones of "Infowars" insisted to the media that gun owners were under attack. Since 2002, Van Cleave’s group has donated more than $200,000 to state republicans, with $110,000 in contributions being in 2019 alone, according to the Virginia Public Access Project.

Although there was no violence reported at Lobby Day [one woman was arrested for wearing a mask, even though many other men in the protest wore them without incident] hospital workers prepared for the worst, including VCU Health. Mike Porter, with VCU’s press relations office, issued the following statement:

“While we wouldn't comment on specific tactics concerning preparations or response by VCU or VCU Health in connection with Lobby Day, we can say that VCU Health is equipped to handle mass casualty incidents and that the VCU Police Department is working collaboratively with all local, regional and state police law enforcement partners in planning and coordinating overall efforts to ensure that students, faculty, staff, patients and visitors remain safe.”