Richmond native Michelle N. Carter found a supporting role in the Oscar-worthy film, “Mass,” while rediscovering her love of acting. 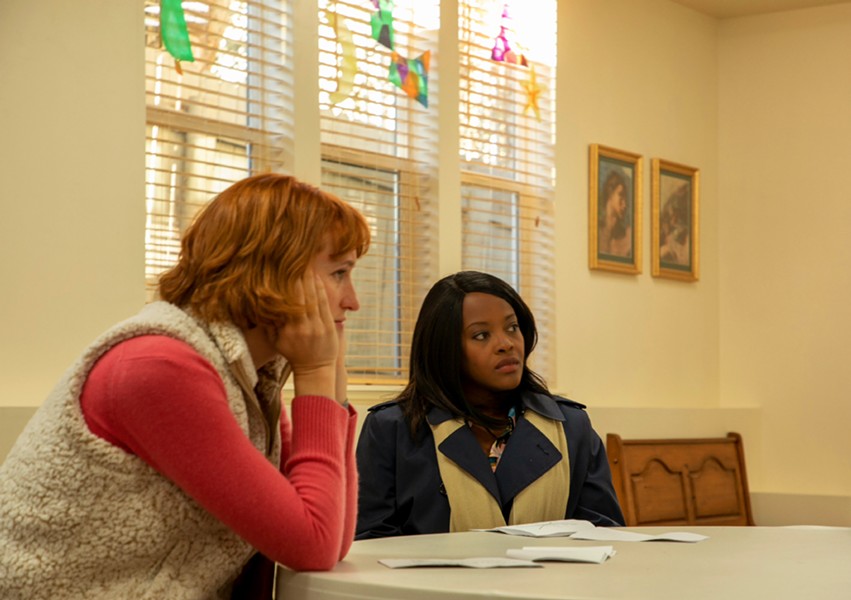 Actors Breeda Wool and Michelle N. Carter (right) on the set of "Mass," a 2021 film that marks the impressive directorial debut of Fran Kranz. It's now available on Apple TV and Amazon Prime Video, or on DVD.

If you haven’t seen it, and not nearly enough audiences did when it was released in theaters at the end of last year, “Mass” is one of the most gut-wrenching and emotionally powerful American films of the last few years. A personal response to the Parkland, Florida school shootings by its writer and director, Fran Kranz, it deserves to be in the running for several Oscars – it’s a searingly honest work of art with tremendous writing and phenomenal acting by a small, veteran cast.

Many of us use terms like “brilliant” or “master class” too casually these days, but this film delivers on those superlatives, offering a prime argument for why an Oscar should be awarded for ensemble performance. The movie feels like a one-act play because it’s all dialogue and mostly takes place as two sets of parents face each other across an empty table: Gail Perry, played by New York theater veteran, Martha Plimpton, in her finest onscreen performance, and her supportive husband, Jay (Jason Isaacs), are meeting Linda (a mesmerizing Ann Dowd), and her presumable ex-husband, Richard (Reed Birney); the latter pair are the parents of a boy who, years earlier, killed the Perry’s son in a high school shooting. It’s the kind of conversation nobody wants to fathom, yet “Mass” feels necessary. Not one of the movie’s many intense moments rings false or exploitative.

What you may not know is that Richmond native and VCU theater alumnus, Michelle N. Carter, plays one of only three supporting roles in the film. Her character, Kendra, is featured in the tense, opening scene. She is working with a couple of curious church employees to carefully prepare a basement room for the impending arrival of the parents. The way Kendra explicitly asks to remove or rearrange certain objects in the room sets the stage and let’s the audience know that something highly sensitive, uncomfortable, maybe even volatile, is about to happen.

“Oh, I’m so glad you felt that way, because that is exactly what we were going for,” says Carter from Los Angeles, where she lives with her husband and daughter. “This moment is something so big, there can’t be any mistakes. She’s preparing a safe place for them to connect, discuss forgiveness and find any hope -- if they can.”

First-time director Kranz tells Style by email that the first fifteen minutes are critical to the overall emotional effect of the movie.

“I firmly believe the movie doesn't work without the opening. The four lead actors do incredible work but the three supporting players set up the film for success,” he points out. “Michelle in particular has a really beautiful and unique combination of warmth and gravitas. It's a very subtle and difficult trick, her performance."

Kranz notes that her character introduces a frightening history from the outside world, but also assures us that whatever is coming she can contain, or in her case mediate: “She's a great actress giving a far more important performance than the character wants you to see,” he explains. “That's the kind of a quality I think an effective mediator or even therapist has, which is effectively her role in the film.”

Carter and her husband were familiar with the lovely small town of Hailey, Idaho, where the film was shot, because they’ve been traveling there for years to work with Company of Fools Theatre, which actually was founded by Rusty Wilson in a Richmond garage in 1992. It moved to Idaho because the founder’s wife, Denise Simone, was good friends with actor Bruce Willis, who asked them to relocate to Idaho and use a beautiful old movie house for their theatre group. Carter was first asked to come do the play “Doubt” in 2007, which started the couple’s ongoing work there; they loved the town so much they named their daughter after it.

In 2019, Carter was acting in a play there called “Cry it Out” when she heard rumors about a film that would be shooting in the area. Someone put her in touch with Kranz, they spoke and he emailed her the script. Once she read it, she was blown away. “The writing is so beautiful, the way it touched my heart, there was no way I could say no. I needed to be Kendra. It was way too powerful to say no.”

Kranz recalls the first time he spoke with Carter about the role, he felt within minutes she could handle the situation portrayed in his film. “On top of being a true talent and a lovely person, she also volunteers with Moms Demand Action and Everytown [both grassroots non-profits advocating for public safety measures and gun control],” he says. “It was remarkable what a resource she proved to be with her personal experience. I'm so grateful to her for all that she brought to the film.”

Born and raised in Richmond, Carter graduated from Hermitage High School in 1989 and studied acting at Virginia Commonwealth University, earning her Bachelor of Fine Arts in theatre. She recalls working with another Richmond native, actress Constance Wu on “The Music Man” for Theatre IV (now Virginia Repertory Theatre); Wu went on to become a Golden Globe nominee for the 2018 movie “Crazy Rich Asians.” Carter toured with the company and also met her future husband, Cliff, on a Theatre IV main stage production.

Today her mother and in-laws still live in the Richmond area so the couple regularly visits. She also considers herself a "ride-or-die" fan of VCU Rams basketball – so much so that her daughter once asked to meet the mascot, Rodney the Ram. “I do miss the neighborhood feel, the sidewalks and the trees, the leaves changing,” she says. “And I miss the Southern comfort food and our little community. I was immersed with the best people at Theatre IV and Barksdale and Swift Creek. I grew and learned as an actor so much. It really was one big family.” 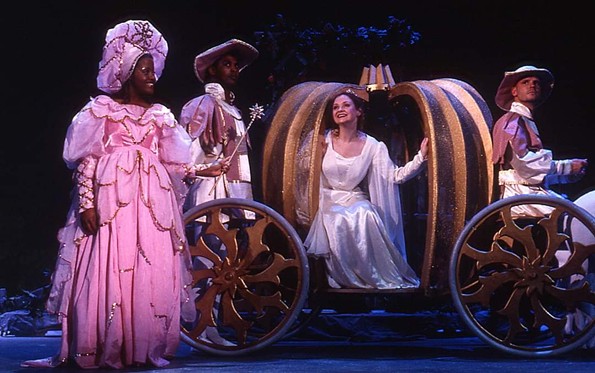 In search of more acting gigs, she and her future husband packed up and moved to Los Angeles 21 years ago. That’s when the hustle really began as Carter started working a series of jobs while taking classes and auditioning for parts, not unlike thousands of other Angelinos hoping to make it in show business.

“Working in call centers, waiting tables, working as a receptionist at doggy daycare and a Pilates studio,” Carter recalls. Then she had to stop acting in 2005 for roughly a year after discovering she had non-Hodgkin’s lymphoma in her spine, which required spinal replacement surgery. To her credit, she bounced back quickly from the cancer and booked a part on “Grey’s Anatomy” in 2007, which helped her down the path to professional representation and many more television gigs.

Her current manager and agent came onboard in 2013 but she says that she feels like she’s grown the most as an actor in the last few years, specifically working on shows like NBC’s “Grimm,” the recent FX limited series, “Impeachment: American Crime Story” where she was directed by Ryan Murphy and “loved watching Sarah Paulson and Clive Owen up close" – and especially her time on “Mass,” a movie that should earn nods for best supporting actress and original screenplay, if enough Academy voters see it. “Being surrounded by stellar, top-notch actors was a master class and I’m serious,” Carter says. “Seeing how their characters just took over and affected their choices, it was so amazing to watch. Just beautiful.”

She remembers sitting down between scenes with actress Ann Dowd, an Emmy winner for her work on “The Handmaid’s Tale” as Aunt Lydia, and confessing how much a former article Dowd had written for Glamour magazine in November 2018 meant to her. The piece was from a speech Dowd had given about not becoming successful until age 56 -- it's about embracing the struggle and staying focused on one's love for the work. 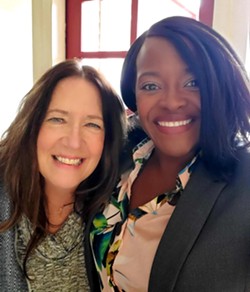 “I told her I was really thinking about walking away from acting when I read that article. I was a new mom and was trying to balance the hustle of being an actor and having postpartum depression and anxiety,” says Carter, who is 50. “But I stayed with it, so I thanked her. She took my hand, squeezed and patted my hand and said, ‘Oh darling, how grateful we are that you did not quit. Now give me a hug [laughs].”

Once she became a parent, Carter says she had much more to draw from as an actor. “I looked at this role very differently with all this new experience that I had,” she says, adding that after the Parkland shootings, she got involved with her local chapter of Moms Demand Action to volunteer and later, helped arrange for two survivors of gun violence to speak to the “core four" actors of “Mass” before filming started.

“I adore Fran Kranz, he has such a wonderful heart and is so smart. But we both were so impacted by the Parkland shooting, that’s where this movie came from for him. We were both new parents at the time,” she says. “I felt helpless, there were so many mass shootings, so I did activist work. Fran took what he does best and wrote this movie, because he needed to do something to make this world a better place for his child.”

“Now we have this beautiful film,” she adds. 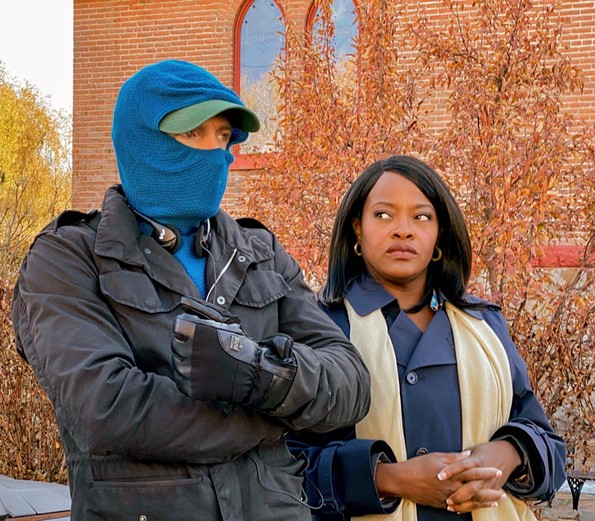 So now that she has been working as an actor for over two decades, how does she feel things have changed for women of color in the business?

“I feel like we have come a long way, but there is still a long way to go, especially with the higher-ups and heads of studios,” Carter explains. “As we move forward, there are more women of color taking on roles as presidents and vice presidents of entertainment at studios – we need them in those positions because when it comes down to my level, they still look for older white actors, or white women specifically, before women of color.”

She says it makes her happy to see more roles being written specifically for actors of color. “Now we can see ourselves a little more in what we’re auditioning for … Plus so many are creating their own content -- for us, by us -- and putting ourselves into the mix. So you’re seeing a lot more people on the screen who look like me.”

From her start in Los Angeles, she says that if you look at the writing rooms for most television shows, you’ll be hard-pressed to find writers of color – “even for shows about a Black family, for example,” she says, adding “Hold on, now [laughs].” She and her husband worked for The Groundlings Theatre and School in Los Angeles in the early 2000s and were blown away by how little representation there was: “When I was there, it was just Daniele Gaither and Jordan Black.” She had to watch several artists of color who simply got tired due to the lack of support.

“Like I said, there is still work to do,” she says, including the realm of writers and higher-up Hollywood executives. "But things are getting better."

And nowadays, whenever she’s feeling overwhelmed, Carter says she remembers her moment with Dowd on the set of “Mass.”