"Cure by Design" puts cancer awareness on the runway in Richmond. 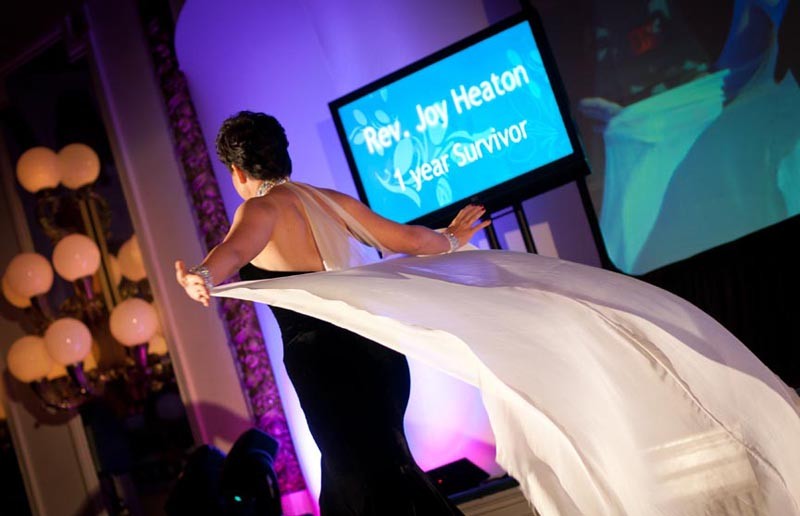 The day after the earthquake in August, about 50 people meet at the Short Pump Hilton to talk about an upcoming fashion show. It's just after 6 p.m., meaning all these people have just ricocheted through Strip-Mall City at rush hour. But not even the traffic hell diminishes their enthusiasm. They are models on a mission.

The Hilton is a shrine to business-casual opulence, with its Shula's Steak House and cavernous ballrooms. It's in one of such ballrooms that these models sit at circular tables. Most of them are older than 30, and listen intently to the rundown for the Big Day.

"The room will be dark and the stage lit," event coordinator Rain Renee says. She tries to put the ladies, all first-time models, at ease. "You'll be introduced, and the announcer will say what you're wearing. Look, the stage is 6 feet wide. But there will be another person beside you, so watch." While she talks, a woman climbs onto the runway, and they walk past each other like in the fashion shows on television.

What to wear, what to bring, what to do with hair: They discuss it all. "Should we bring our own jewelry to accessorize the outfits?" one woman asks. The show features clothing from Tommy Hilfiger, ex-"Project Runway" star Johnathan Kayne, and local designers, including Evelyn Bagala, and retailers such as Saxon Shoes. The answer is no. "Expect a package," Renee says: "clothes, hair, shoes, jewelry."

The room remains quiet. They have a lot to think about: arrival time, family meeting schedules, how many tickets. But there are few real worries. They're tough. They've all survived cancer. A fashion show? Bring it.

"They bond," says Patti Jackson, area executive director for the American Cancer Society, host of Cure by Design. "They have a reception for them, a group social. They spend a lot of time together."

Cure by Design started in Florida and quickly spread to other markets, including Washington, but Richmond's show is especially vibrant. Since its inception six years ago the fundraiser has blossomed in other Richmond venues, but annually there's a turnout of 300 to 400. It's a community event, as individuals and businesses pitch in to give something, or in the case of Bon Secours, financial support. Event proceeds go back to helping people with cancer in the community.

Everyone benefits, especially participants, all of whom — women, men and kids — have finished treatment. "It's a journey," Jackson says. "You're not feeling so great after cancer treatment. Suddenly you're a celebrity."

"It made me feel really good to do it," Diane Foreman says. She lives in Chesterfield County and has shoulder-length dreadlocks. She walked in last year's show not long after her double mastectomy. "It made me feel good to dress up," Foreman says. She's returned to volunteer, as nearly all participants do. "It's important for people," she says. "You get to a place where you're down in the dumps. You're thinking, 'Why me?' [The show] spared me."

Julia Skeens, a feisty woman from Prince George, beat cancer twice. Last time she went back to work two weeks after treatment. "I'm a fighter," she says. "It's going to be fun." The big night transforms people, says Carolyn Drudge, another coordinator. "They come out looking like a million bucks. Everyone's cheering and clapping — they feel supported."

Glenn Hodge is of few men here this evening: a post-boomer who uses a cane. He had prostate cancer in 2008. "Right now I'm totally cured," he says. "My philosophy in life is: 'Don't take yourself too seriously. Laugh a lot.'"

What's he wearing? "They're not telling me," Hodge says, smiling. "But it's not a bathing suit." S

"Cure by Design" is scheduled for Sept. 24 at Hilton Richmond Hotel and Spa, 12042 W. Broad St. Reception and silent auction is at 6 p.m. and fashion show is at 7 p.m. For tickets and information call 527-3760 or go to facebook.com/curebydesign.