As the fashion industry changes, VCU is preparing its students with real-world experience. Meet some of the rising young stars behind-the-scenes at this year’s Fashion Runway 2019: Shimmer.

For the past 50 years, stitches, zippers, trains, buckles and dyes have floated down the runway at the end of the Virginia Commonwealth University school year.

Each hem and design was imagined, chosen and created by the hands of a junior or senior. And this year is no different during the 50th annual juried fashion show held May 8 at Main Street Station.

Not only are fashion design students proudly feeling the eyes of the large crowd fall on their art, but merchandising students lead the production of the show, from model selection to set design. Rising sophomore design students hustle to dress models according to the vision of the showcasing designers.

This year's designs heavily feature luxury, denim and knitwear. There's a practical reason for this, according to Patricia Brown, chair of the fashion design and merchandising department. Since 2015, Brown has guided the program's course offerings while nurturing relationships with designers and businesses around the world. "If you start high, it's easier to work down the market," she says. "The more they have in their tool belts, the easier it is to get a job."

Design and merchandising professors are preparing students to not only work in the current industry, but to evolve with what the future of fashion might bring. That might even mean a larger industry here in Richmond.

"We're preparing them to go into an industry that's changing," says Hawa Stwodah, aassistant chairwoman of department. "Richmond is a making community."
As fashion moves away from seasons and high-volume corporate manufacturing, there's an opportunity for some of these students to stay and evolve their craft here.

"The industry is not the same as it was 20 years ago," Stwodah says. "Luxury doesn't have to be expensive, it's just the amount of time and human involvement that goes into the creation of the piece: distressing denim, smocking linen. They're becoming lost arts, but we're showing them the way."

Stwodah is a 1998 graduate of the program who spent time in the VCU arts school in Qatar, the school's campus in Dohar where she earned a master's degree in design. She's mentored many of the students who are graduating this year.

Backstage, she swiftly floats between students, models and racks of garments. She attentively answers questions and helps solve show-night problems.

At the same time Stwodah is moving around backstage, senior Taylor Virgil is arriving with her mom and dad to find their seats for the show.

Early on in class, Stwodah says you can tell which students are designers and which are merchandisers. And she knew Taylor Virgil was a design student right away.

"It was immediately in my class that she began to ask a lot of questions," Stwodah says. "She didn't just ask how, but why. I knew I had a true designer on my hands."

Virgil's Mom, Romaine Johnson, says her daughter has always been drawing since she was younger. "I draw and paint myself and decorate," Johnson says. "When it came time for college, she came to us and said 'I want to go to art school.'"

Virgil also says that her aunt, who is a fashion designer, helped turn her imagination toward fashion.

"I knew I wanted to do fashion design, I knew that since I was a little girl," Virgil says. "My aunt … does accessories, upcycling, revamping, personalizing different items that she finds like designer bags."

Throughout her four years at the university, Virgil has returned to her aunt's side at her sewing machine to seek advice, hoping to talk about the business of fashion and improve her craft. 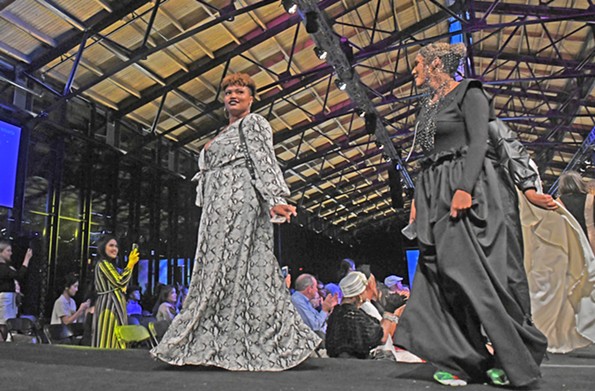 Virgil's close ties to her family helped her build a community around herself at school, Stwodah says. They got to know each other outside of class, always talking through different ideas and concepts together.

"A lot of people have a romanticized view of the industry, but design is a practical, problem-solving practice," Stwodah explains. "We will always have to function in clothing and we'll always be dealing with that dogmatic problem in terms of space, color, textiles."

One of those problems is sizing. Virgil wants to go into plus-size fashion.

"I want to design for girls like me," she says. "I want them to have things that make them feel really good about themselves that don't drown them out. I want to make other girls and other people feel beautiful the way that they are."

Virgil has been able to address some of those issues on campus and in Qatar, where the program has a satellite campus. After a semester abroad, she developed and showed her first collection. A few days before she returned home for the summer, she came up with a concept for her senior collection: a Moody Future.

"I was inspired by myself and my struggles," Virgil says. "I was reflecting on myself and looking into the future."

And the future, as she sees it, is more "Afro-futurism," a cultural aesthetic with roots that run from the spacey jazz of Sun Ra and abstract canvases of Jean-Michel Basquiat to the current comic book movie "Black Panther."

"Black people and the future aren't talked about as much," she continues. "What would this vibe be? What is this black girl going to be wearing when we're all searching for that happiness and that good place?"

Virgil shows four pieces from the collection during Shimmer in addition to one menswear and one luxury look. Deep, rich colors like purple and textiles like organza and leather harnesses helped her visualize a Moody Future

For her work, Virgil earned the Donald D. Breitinger Award of design excellence and the National Association of Men's Sportswear Buyers Foundation's George Newman Award for excellence in menswear design.

Her proud mom notes that the "real world rigor they put into the courses and instruction have them working like they are creating their own line. .... They feel the pressure and stress."

Virgil will spend this summer at home with her family in Baltimore. She hopes to save money to move to New York in the fall.

Leading an army of nearly 60 models, senior Mercedes Miller struts tall and with a smile. She's been at Main Street Station all day helping with dress rehearsal and setting up. Before and during the show, she bounces between every corner of the venue.

She wears an asymmetrical dress, split into gray and black. A clear wire tucked behind her left ear leads to a walkie-talkie. She frequently stops midsentence, looks into the distance and listens intently as a member of her production team asks a question or shares a concern. She is the pusher during the show, telling each model when to walk, where and how.

By the end of the show, she says she thought everything that could go wrong did go wrong. Yet she still smiles and laughs.

From the crowd's vantage, the show is seamless and captivating — no tumbles, no rips and no lulls.

Miller was named outstanding merchandising student of the year by the department. She helped select the models for the show, working with Modelogic to narrow a pool of 120 candidates to the 60 or so, including children, who walked during the show.

And by the time the show began, she had already finished her last exam of her undergraduate career. Her four-year course load included graphic design, marketing, business and art history.

"You learn pretty much everything about the industry except for design," she says. "Even right down to supply-chain logistics. You can do so many things with this degree. It's so versatile."

"I was using what I learned in my buying class every single day," she says.

During her internship, she could cross-examine and analyze spreadsheets with fields of numbers, comparing trends and categories over different time frames. Other interns had never seen a buying report.

The program has exposed her to every element of the fashion industry. It's helped her learn how to succeed and also led her to one conclusion:

This past year, Miller has focused her free time on styling, working with local photographers such as Melanie Helms and Kai Eason and pulling items from local boutiques like Firefly Lane, Shop Evolve, Simple Soul and Tailor. She hopes to find work in New York or Los Angeles after spending a summer in Richmond as a teacher's assistant.

"It's really, really hard to cut through the noise and get fair pay," she says. " It's what I really want to do and I'm going to do it."

"I'm a head dresser," he says as he lightly smoothens fabric on a model. "There are two head dressers. I just want to make sure I get the designer's vision right."

Haskins stays backstage to prepare the models to walk the designs of seniors and juniors down the runway. Armed with a box of tools that include simple scissors and tape, he prepares each look. His eyes move between a model and a piece of paper with notes written by a design student describing how garments should lay, which shoes to pair with the garment and other crucial details.

Last year, Haskins was a model in the show, so he knew what to expect. Next year, he hopes to share his own designs. He just finished up a week of finals, complete with all-nighters—not his first round of all-nighters, either.

"I remember my hands being raw," he says.

During his first embroidery course, Haskins stayed up a couple nights to prepare for a final project. Since then, he's been able to put the needle down and pick up markers and use the computer to give shape to his designs.

"You can imagine more when you're drawing," he says. "You don't have to use the resources and time to make your idea come to life and to share it with others."

Like Virgil, while he learns foundational art and design skills, he's also learning how to solve the different problems that might prevent bringing a concept to life. This year, he developed men's and women's street-style collections. He was inspired by envelopes, he says, and his designs feature folds and edges in "stationary browns and yellows."

Haskins is the youngest design student to win a Fashion Scholarship Fund award. He'll use those funds this summer. He's headed on a tour of the denim industry, led by VCU alumnus and affiliate professor Donwan Harrell and associate professor Henry Swartz. Harrell is the founder of premium denim company PRPS.  The course will lead Haskins and other students to New York and Portugal as they visit manufacturing plants and luxury denim offices. Part of the course takes place in Richmond, examining Harrell's own vintage textile collection.

When he graduates in two years, Haskins hopes to find work with a brand like Dior, he says. He thinks New York will be where he lands. In the meantime, he's enjoying Richmond.

"Something that's awesome in Richmond is how heavy the thrift culture is," he says. "It might seem ironic, but it's an incredible way to reduce waste. So much of waste we create in the fashion industry."

He's looking forward to working through the problems of the changing industry, including an increased attention to ethical practices.

"I eventually want to work for a high-end women's ready-to-wear company, something like Dior or Valentino," he says. "That's the long-term goal, working up to that point, figuring out the map." 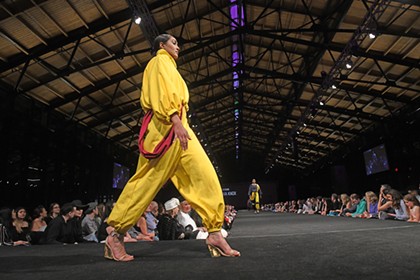 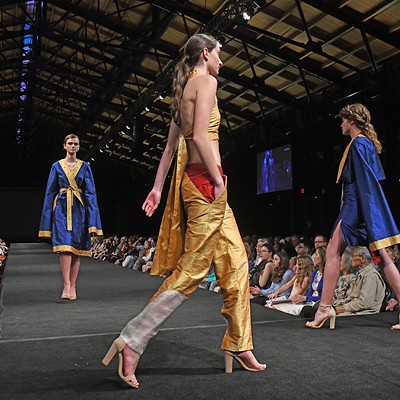 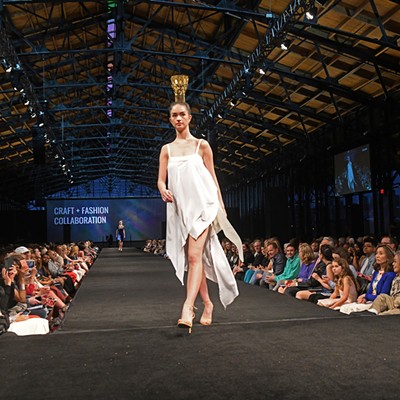 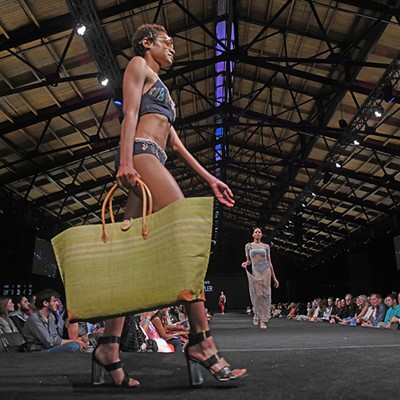 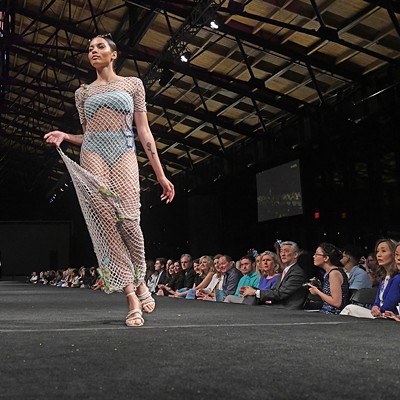 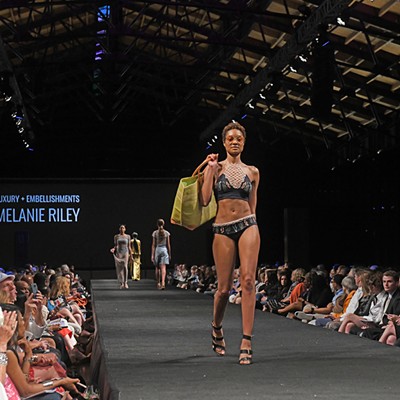 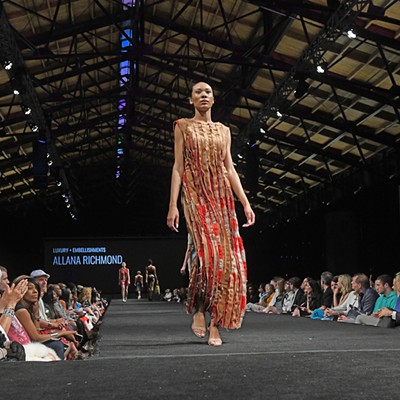 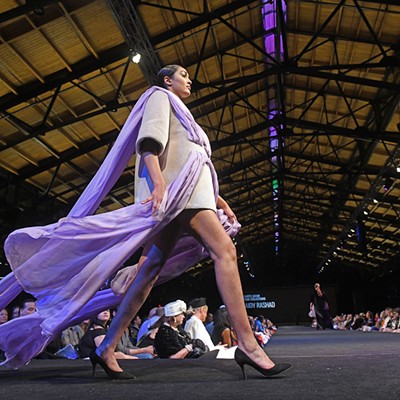 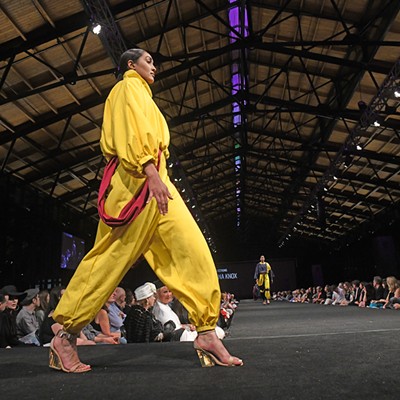 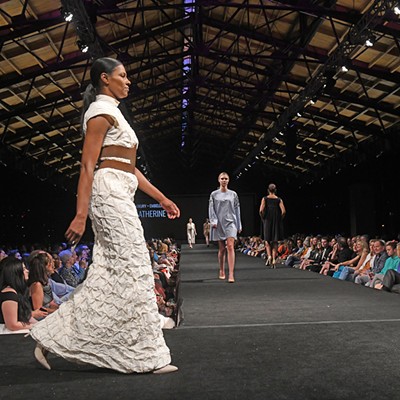