Book picks for the end of summer. 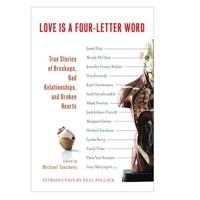 You can sleep with this book, throw it against your wall and mail it — dog-eared, tear-stained and speckled with flecks of spit from compulsive barks of laughter — to all of your exes. But only after you've read it again and marked up the most gruesome passages with your black highlighter. Cringe with pleasure over humiliatingly delicious gems such as Lynda Barry's graphic short, “Head Lice and My Worst Boyfriend,” and Maud Newton's “Conversations You Have at Twenty.” Revisit the notches on your own scratched-up bedpost with “Twenty-Five to One Odds” by Josh Kilmer-Purcell, and pine for the one you kicked to the curb in “I Love You in Twelve Languages” by Wendy Brenner. Swoon, groan and then finally cheer for the anthology editor Taeckens' own intellectual affair-turned-VD-disaster. Because at the end of the melodramatic day, unrequited love coupled with excellent writing make the best bedfellow of all. 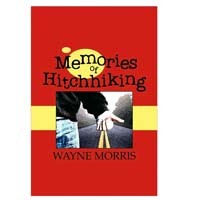 >It was 1975 in Grindelwald, Switzerland, when Wayne Morris washed his own front tooth down with a swig of beer and a crusty chunk of bread before finishing off the job of getting drunk, smoking cigars and playing guitar with a group of musicians he met on the train to Jungfraujoch. The charm of the subject matter contained in these travel-bound vignettes trumps the alarming typos that speckle the pages — almost as if this Richmond-born Goochland County resident wrote the book with his thumbs from the passenger seat of a moving vehicle. Read through the nostalgic haze to find useful pointers for hopeful hitchhikers (how to get a good night's sleep on an on-ramp) as well as ecstatic recall for seasoned hitchhikers (let's talk with Native Americans about scorpions and scalpings in Arizona!). Morris also offers insight into gender discrepancies inherent in life on the road: “[Women's] stories were like direct flights on airplanes, whereas mine had many a lay-over.”

“A Question of Freedom: A Memoir of Learning, Survival and Coming of Age in Prison”
by R. Dwayne Betts
Penguin, $23 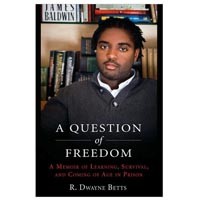 >Prison may be an unlikely springboard for the launching of a successful literary career, but it's between the walls of a cell, a cafeteria and a rec yard that R. Dwayne Betts encounters his passion for literature and the power of words (beginning with co-defendant and recognizance).“Prison made language the most important thing in the world,” writes Betts, who at 16 with a friend carjacked a man, served an eight-year sentence in Virginia-area prisons and became 90673, a number that meant more to him for a time than his own name. Written against a thematic backdrop of race, crime, education, civil liberties and the judicial system, Betts' particular story pushes up and against every statistic he's afraid of becoming. Noticing that he treats the Latinos the way white people treat him, he learns Spanish. Disconnected from the outside world, he writes poetry. Now a graduate student at Warren Wilson College, the national spokesman for the Campaign of Youth Justice and an award-winning poet and speaker, Betts' name, not number, precedes him.