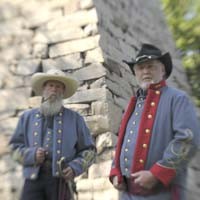 Thomas Daniel is full of stories but the best ones are silent, wrested from a strange and often violent world into the two-dimensional glossy pages of a book.

A decorated photographer and a veteran of the Vietnam War, Daniel is unapologetic for his devil-may-care manner. “I live my life the way Thomas Daniel wants to live his life,” he says. “I was a real bad boy and I still am sometimes. After I left Vietnam, I said, ‘I’m never going to have another bad day again.'”

Nearly 40 years since three tours of Vietnam — where he was a radio operator and first started snapping photographs — he's thrown himself into another war, one without live fire and with an outcome that is largely predetermined.

He's a second lieutenant and war correspondent in the Army of Northern Virginia, first division, under Col. Tony Farinelli and artillery chief Col. Dwight Nesbitt. Daniel's wife, local artist and elementary-school art teacher Margaret Porter, was willing, for this article, to reveal her top-secret military identity as a Yankee spy.

After following one of his students to Charleston, S.C., in 2004 for the burial of the crew of the Confederate submarine the H.L. Hunley, it came to Daniel that the pictures he was taking were the beginning of a series. In the midst of thousands of books about the Civil War, and one or two about the history of Civil War re-enactors, Daniel had never seen a book answering why each year, thousands of modern-day men and women go out under the blazing sun in wool pants to fight each other on horses.

To find out, he started to do it too. “That's what you have to do,” he says. “Get on the inside and look out.”

Daniel's body of work is disturbing, beautiful and impossible to skim. He's drawn to a world above and beyond mainstream America, focusing his lens on animal sacrifices, tent revivals, midget snake handlers, Chesterfield County homecoming queens, wizened and toothless Native Americans and the disenfranchised-but-tough in the heart of America. His photographs force the viewer to look long and hard at faces and acts they might otherwise choose to ignore.

“The Southern Cause: For the Love of Dixie” is Daniel's fourth book of photography, an elegant gathering of nostalgia, successfully bridging the gap between the harsher Civil War daguerreotype and the modern-day portrait.

And to make it, he was not about to flit around on the fringe. While lying in a ditch under Yankee “fire,” Daniel asked the Confederate private by his side why he does what he does. “We're just men playing with toys,” the private answered. “We like to play cowboys and Indians on the weekends.”

There are other, perhaps more noble causes outlined in his book, but of them all, this is Daniel's favorite. “I'm a rebel, I'm an Indian and I love it,” he says.

Like any subset of society, Daniel says, “there's the good, the bad and the ugly. I choose to hang with the good and the ugly. I never heard anyone say [a racial epithet] and that's the reason I've been able to hang out with them.”

Daniel says his book is not meant to be historical or to sway anyone's opinion about the Civil War. It's about the re-enactors. He's not fond of the racist aftertaste left by the Confederacy. “You want to beat the shit out of the people hanging Confederate flags next to the Nazi flag,” he says. “But hopefully this book will show the other side [of the re-enactors]: ‘The I-Love-Dixie Generation’ … [For them,] it's all about heritage.”

Armed with a camera rather than a musket, Daniel has made fast friends in both the Confederate and Union armies. “You battle a couple hours a day,” he says, “but the really good part is getting together and cooking steak — it's rarely hamburger — everybody has a really good time.”

And he feels a special affinity for the man who toured Vietnam at the same time as he, Farinelli. “He's my colonel because we have something in common that no one else has — we've been under live fire.”

Thomas Daniel's photographs from “The Southern Cause” and Margaret Porter's Confederate paper dolls will be on display at Art6 gallery through Sept. 28. There will be an opening reception Friday, Sept. 5, 7:30-9 p.m., with a book signing, featuring music by the Slack Brothers Bluegrass Band and a special presentation by Civil War re-enactors at 7:15. Call 343-1406 or visit www.art6.org for more information.